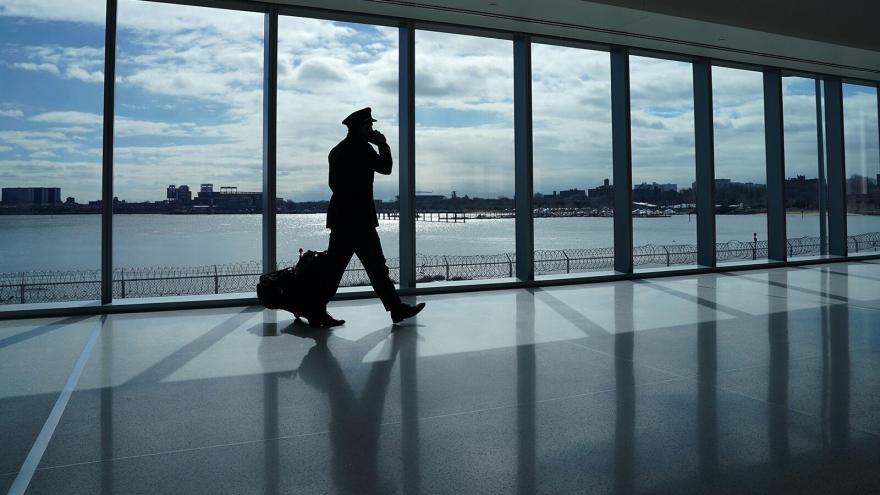 On September 26, President Joe Biden is expected to announce a new proposed rule that would require airlines and travel sites to be more transparent about additional fees. A pilot is pictured here at LaGuardia Airport in 2021.

Under the proposed rule, airlines and travel sites "would have to disclose up front -- the first time an airfare is displayed -- any fees charged to sit with your child, for changing or canceling your flight, and for checked or carry-on baggage," according to a draft news release by the Department of Transportation shared with CNN.

Biden argued that the new regulations would lead to increased competition between carriers.

"Capitalism without competition isn't capitalism," he said. "It's exploitation."

For example, Biden said, some airlines were charging fees for families with children to sit together. Some carriers were charging customers flight change fees -- even for flights canceled by the airline.

"They cancel on you, and you have to pay a fee to rebook," Biden said. "Come on, man. It's just simply not fair. It's not fair."

Passengers deserve to know the true cost of their flights before they buy a ticket, Transportation Secretary Pete Buttigieg said in a statement on Sunday.

"This new proposed rule would require airlines to be transparent with customers about the fees they charge, which will help travelers make informed decisions and save money," he said.

Airlines for America, a trade group that represents major US air carriers, told CNN in a statement: "A4A member passenger airlines -- which are fierce competitors -- already offer transparency to consumers from first search to touchdown. US airlines are committed to providing the highest quality of service, which includes clarity regarding prices, fees and ticket terms."

"A4A passenger carriers provide details regarding the breakdown of airfares on their websites, providing consumers clarity regarding the total cost of a ticket. This includes transparency regarding taxes and government fees on airline tickets, which account for more than 20% of many domestic one-stop, roundtrip tickets."

Tens of thousands of flight cancellations and delays this summer prompted Buttigieg to direct the Department of Transportation to publish a new online dashboard to allow passengers to find comparative information on what each of the large US airlines provides to passengers when delays or cancellations are caused by factors within the airlines' control. Several major US carriers updated their policies in response to calls from DOT for more transparency. Airlines have struggled with staffing shortages and summer weather.

Monday's meeting was the third gathering of the White House Competition Council, which was formed last fall and is charged with promoting competition across the US economy and lowering costs for American families. The group consists of eight Cabinet members and the chairs of seven independent agencies.