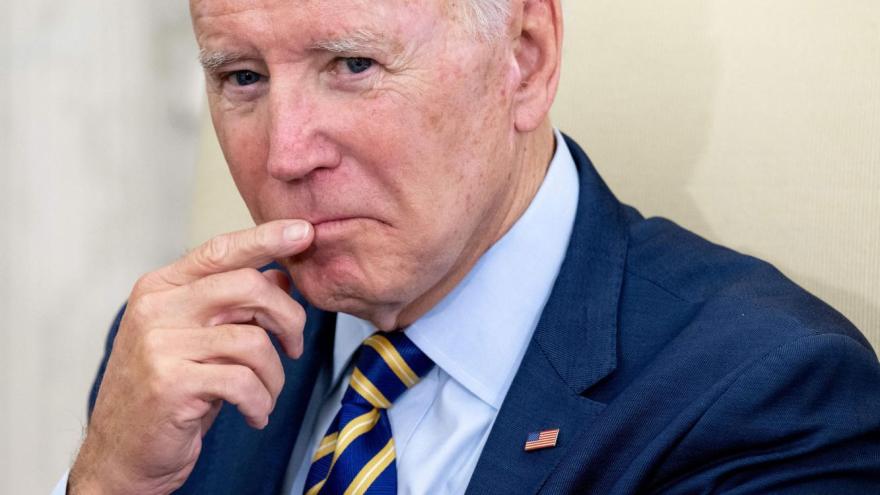 President Joe Biden, seen here in Washington, DC on September 16, is set to make a new push for a bill aimed at targeting dark money in campaigns more than 10 years after the legislation failed to pass in the Senate.

(CNN) -- President Joe Biden on Tuesday renewed his push for Congress to approve a bill aimed at targeting dark money in political campaigns, though the legislation is expected to fail this week due to Republican opposition.

"There's much too much money that flows in the shadows to influence our elections. It's called dark money. It's hidden," Biden said in a speech from the Roosevelt Room.

The President referenced a $1.6 billion donation from a single donor to a group led by the co-chairman of the conservative Federalist Society, who advised former President Donald Trump on his Supreme Court picks and runs a sprawling network of other right-wing nonprofits. The donation, which CNN reported in August, was the largest single contribution to a politically focused nonprofit that's ever been made public.

"The public only found out about this $1.6 billion transfer because someone tipped off some of you reporters. Otherwise we still wouldn't know about it," Biden said. "But now we know and there's something we can do about it."

Biden said dark money is an issue in both Republican and Democratic politics but noted congressional Republicans have opposed efforts to increase transparency.

The President's speech comes one day after Senate Majority Leader Chuck Schumer announced during a speech on the Senate floor that the chamber will take a procedural vote on the DISCLOSE Act Wednesday, which is likely to fail due to GOP opposition.

The legislation would require greater transparency into who is behind much of the secretive, often negative, campaign advertising. It would require most independent groups that pay for political advertising -- which is currently not required to disclose the names of donors -- to release the names of those who give donations of $10,000 or more.

Schumer called dark money a "veil cast over our democracy that must be ripped away once and for all."

He said that the legislation "would require Super PACs and other dark money groups to report anyone contributing $10,000 or more during an election. It would likewise require groups spending money on judicial nominees to disclose their donors too."

The bill does not have the 60 votes needed to clear a procedural hurdle, but Schumer insisted that they will hold the vote anyway to put GOP members on the record.

"Republicans are going to have to take a stand on whether they want to fight the power of dark money or allow this cancer to grow even worse," he said.

The DISCLOSE Act first passed the House of Representatives narrowly in 2010 and failed twice in the Senate in 2012, with Republican opposition led by Sen. Mitch McConnell of Kentucky.

"This legislation is an unprecedented requirement for groups to publicly disclose their donors, stripping a protection recognized and solidified by the courts," McConnell said in 2012, accusing Democrats of crafting the legislation to favor labor unions.

And the late longtime campaign finance reform advocate Sen. John McCain said at the time in a floor speech that the bill was a "clever attempt at political gamesmanship."