Biden signs new executive order on abortion rights: 'Women's health and lives are on the line' 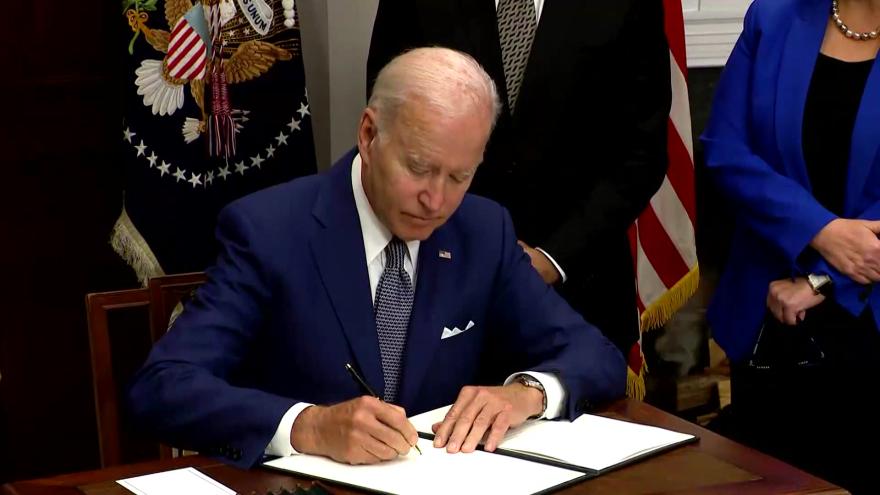 President Joe Biden will sign another executive order on August 3 as part of his administration's efforts to help ensure access to abortion in light of the Supreme Court's decision earlier this summer to eliminate the federal right to the procedure.

(CNN) -- President Joe Biden on Wednesday signed an executive order to help ensure access to abortion in light of the Supreme Court's decision earlier this summer to eliminate the constitutional right to the procedure.

The President said the order helps women travel out of state to receive abortions, ensures health care providers comply with federal law so women aren't delayed in getting care and advances research and data collection "to evaluate the impact that this reproductive health crisis is having on maternal health and other health conditions and outcomes."

Biden spoke of the "chaos and uncertainty" that has ensued in the wake of the Supreme Court's decision and said, "Women's health and lives are on the line."

"Emergency medical care being denied to women experiencing miscarriages, doctors uncertain about what they can do to provide for their patients, pharmacists unsure whether they can fill prescriptions that they've always filled before, a tragic case of rape survivors, including a 10-year-old girl forced to travel to another state for care," Biden said before signing the order.

The order comes the day after Kansas voters handed abortion-rights advocates a massive victory and defeating a measure that would have allowed the GOP-led legislature to impose new restrictions. It was a vote that Biden celebrated at the White House.

"In a decisive victory, voters made it clear that politicians should not interfere with the fundamental rights of women. And the voters of Kansas sent a powerful signal that this fall the American people will vote to preserve and protect the right and refuse to let them be ripped away by politicians," Biden said at the event. "And my administration has their back."

Biden signed the executive order during the inaugural meeting of the administration's recently established Task Force on Reproductive Healthcare Access, which is comprised of representatives from multiple departments across the federal government. Cabinet members briefed the President on steps their respective agencies have taken to defend reproductive rights.

Last month, CNN reported doctors have struggled to navigate byzantine guidance as states across the country pass increasingly strict abortion restrictions, with experts warning of "an enormous chilling effect" on doctors performing miscarriage surgeries even when doctors "are confident that what they're doing is within the letter of the law."

According to a senior administration official, that would allow states to provide care for out-of-state patients seeking abortions through a Medicaid 1115 waiver, permitting states to waive certain state-based requirements in providing care and assist in covering "certain costs."

Pressed Wednesday on how the president's executive order on reproductive care avoids running afoul of the Hyde Amendment, which prohibits the use of federal funds to perform abortions, White House press secretary Karine Jean Pierre said the Department of Health and Human Services will "come up with the details on the specifics on how they're gonna work with states" to provide care via Medicaid waivers.

"So, as you know, Medicaid provides comprehensive health care to women with low incomes -- this care includes family planning services such as contraception, non-emergency medical, transportation, and support services like targeted case management, which allows health care providers to help patients coordinate their care," Jean-Pierre told CNN's MJ Lee. "And it also includes abortion care in certain circumstances, as accepted by the Hyde Amendment, which is rape, incest and life of the mother."

The executive order, Jean-Pierre told Lee, "will cover care that is otherwise part of Medicaid," including non-emergency medical travel and other health care services.

She added, "The Hyde Amendment is law and we're gonna, we're gonna follow that law."

Wednesday's executive order is the second one signed by Biden in the wake of the Supreme Court decision overturning Roe v. Wade. Last month, Biden signed an order that he said would safeguard access to abortion care and contraceptives, protect patient privacy and establish an interagency task force to use "every federal tool available to protect access to reproductive health care."

Ultimately, however, there is no action the President can take to restore the nationwide right to an abortion, and Biden has publicly acknowledged that his options to expand abortion access remain limited.