Biden was 'positive' about eliminating student debt but made no commitments, lawmaker says 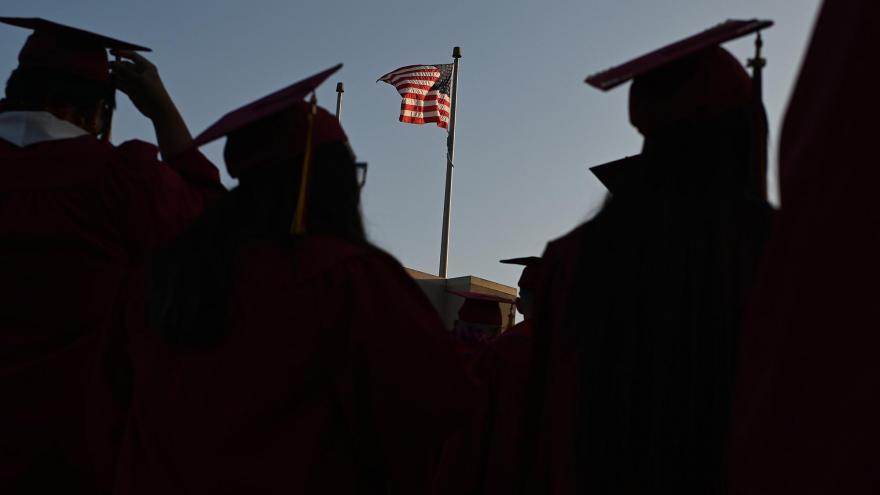 President Joe Biden appeared "positive" about the idea of forgiving at least $10,000 in Americans' student loan debt but did not make a definite commitment on the matter. A US flag flies above a building as students earning degrees at Pasadena City College participate in the graduation ceremony, June 14, 2019, in Pasadena, California.

(CNN) -- During a meeting with members of the Congressional Hispanic Caucus on Monday, President Joe Biden appeared "positive" about the idea of forgiving at least $10,000 in Americans' student loan debt but did not make a definite commitment on the matter, according to a congresswoman in the room.

California Democratic Rep. Nanette Barragán told CNN on Tuesday that Biden and the Democrats had discussed the scope of such a plan -- including whether it would include public and private institutions -- but that the White House made no commitment nor specified a time frame for taking such a step.

Her comments on the discussion come amid reports that Biden strongly indicated during the meeting that he would take action on the issue through executive authority. But reporting that Biden had relayed a decision at the CHC meeting, Barragán said, "was news to me."

Since taking office, Biden has taken several actions to provide student loan relief. He's repeatedly extended a pause on federal student loan repayments, an action which was initially issued during the Trump administration to help borrowers struggling economically due to the pandemic. Most recently, the White House announced the pause would be extended through August 31.

Rep. Tony Cárdenas, a California Democrat who also attended Monday's meeting, said he raised the issue of extending the payment freeze to the end of the year and providing $10,000 or more in student loan relief to all American borrowers via executive order.

In an interview with MSNBC, Cárdenas said that when he brought both issues up to the President, Biden told him that he'd be "pleased" with the moves his administration is working on.

As Biden's tenure has gone on, he's faced growing pressure to deliver on broad student loan relief. And some key Democratic lawmakers, including Senate Majority Leader Chuck Schumer of New York and Sen. Elizabeth Warren of Massachusetts, have called on Biden to broadly cancel up to $50,000 of student loan debt per borrower.

The White House has long indicated that the President would support action by Congress to eliminate $10,000 in student loan debt forgiveness for borrowers, but Biden hasn't made clear whether he would use executive powers to immediately provide that mass debt relief. But it's unlikely Congress, where Democrats have a slim margin, has the votes to pass legislation broadly canceling debt.

White House press secretary Jen Psaki said on Tuesday that Biden will make a decision on whether to take further action on student loan relief "before there's an end to that pause."

"Right now, it's been extended through August ... he is looking at other executive authority options he has to bring relief to people who have student loans. So, that's what he conveyed during the meeting yesterday," she added.

Pressed on whether the President would consider using executive authority, Psaki said, "He's continuing to look at it."

The Biden administration has already moved to provide other forms of relief to student borrowers.

The administration expanded existing loan forgiveness programs for borrowers who work in the public sector, those who were defrauded by for-profit colleges and those who are now permanently disabled. The moves help borrowers enrolled in what's known as the income-driven repayment program attain debt forgiveness.