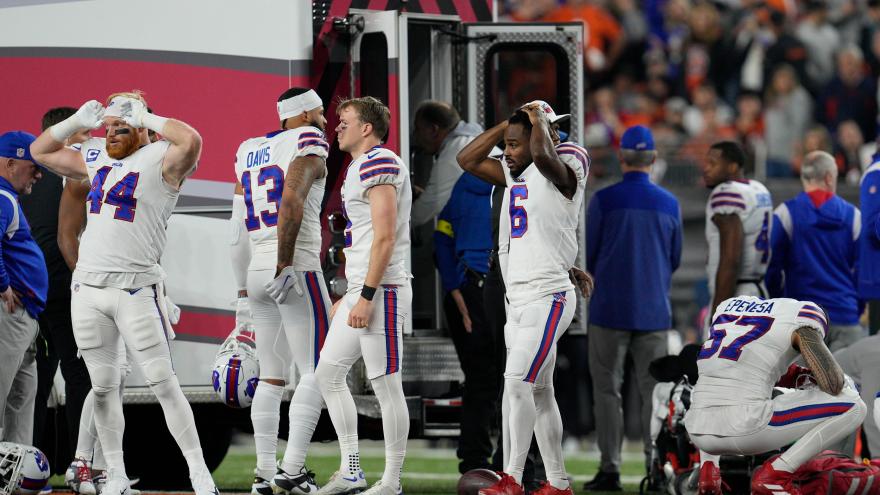 (CNN) -- Buffalo Bills safety Damar Hamlin is in critical condition after collapsing on the field during the first quarter of Monday night's game between the Bills and Cincinnati Bengals, the NFL said in a statement.

Hamlin fell on his back just moments after getting up from an open field tackle of Bengals wide receiver Tee Higgins.

Within ten seconds of the collapse, Bills team trainers were treating the player. An ambulance was brought onto the field in less than five minutes, footage shows, and he was administered CPR, according to an ESPN broadcast.

"Hamlin received immediate medical attention on the field by team and independent medical staff and local paramedics. He was then transported to a local hospital where he is in critical condition," the NFL said.

The game has been postponed due to Hamlin's medical emergency, NFL Commissioner Roger Goodell announced in the statement. The game was stopped at 5:58 of the first quarter.

NFL commissioner Roger Goodell was in contact with the game officials at Paycor Stadium in Cincinnati to determine fate of the game, according to the broadcast.

CNN has reached out to the NFL and the Bills for comment.

The NFL Players Association tweeted Monday night that the organization and "everyone in our community is praying for Damar Hamlin."

"We have been in touch with Bills and Bengals players, and with the NFL. The only thing that matters at this moment is Damar's health and well being," the players association said.

The Bengals tweeted that they are "sending our thoughts and prayers to Damar."

The 24-year-old player is in his second year with the Bills and has played every game this season.