Bishop at DC church outraged by Trump visit: 'I just can't believe what my eyes have seen' 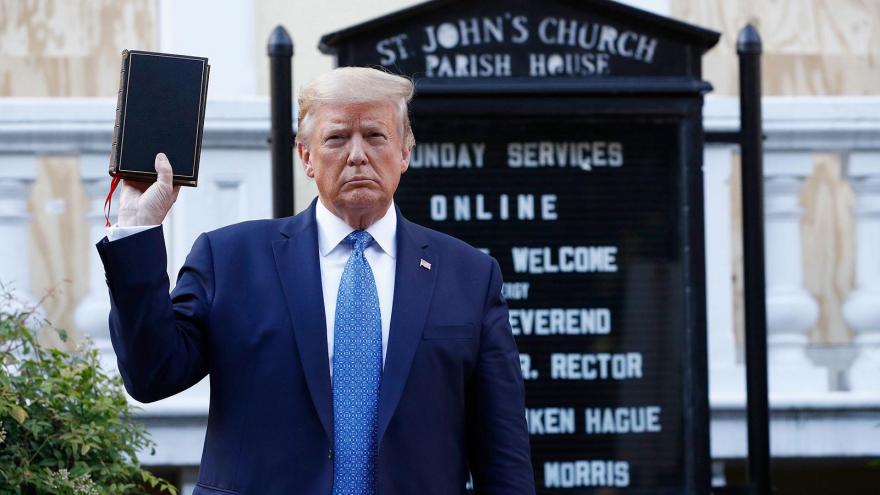 President Donald Trump holds a Bible as he visits outside St. John's Church across Lafayette Park from the White House Monday, June 1, 2020, in Washington. Park of the church was set on fire during protests on Sunday night.

(CNN) -- Bishop Mariann Edgar Budde of the Episcopal Diocese of Washington said Monday she is "outraged" after President Donald Trump's visit to her church without advance notice to share "a message antithetical to the teachings of Jesus."

Her pointed comments came after the President walked from the White House to the house of worship used by American presidents for more than a century. Peaceful protesters just outside the White House gates were dispersed with tear gas, flash grenades and rubber bullets. It was all, apparently, so Trump could visit the church.

"I am outraged. The President did not pray when he came to St. John's, nor as you just articulated, did he acknowledge the agony of our country right now," Budde told CNN's Anderson Cooper on "AC360."

"And in particular, that of the people of color in our nation, who wonder if anyone ever -- anyone in public power will ever acknowledge their sacred words. And who are rightfully demanding an end to 400 years of systemic racism and white supremacy in our country. And I just want the world to know, that we in the diocese of Washington, following Jesus and his way of love ... we distance ourselves from the incendiary language of this President. We follow someone who lived a life of nonviolence and sacrificial love."

"We align ourselves with those seeking justice for the death of George Floyd and countless others," she continued. "And I just can't believe what my eyes have seen."

He remained at the boarded-up building for a matter of minutes before returning inside the White House. The exterior of the church had been defaced during protests outside the White House Sunday, and there had been a small fire in the parish house basement but church leaders said in a statement that the structure was largely "untouched."

"We have the greatest country in the world," Trump said outside the building.

Beyond using the church as a backdrop, Budde criticized Trump's use of a Bible during the visit, which he held up as he posed for cameras.

"Let me be clear: The President just used a Bible, the most sacred text of the Judeo-Christian tradition, and one of the churches of my diocese, without permission, as a backdrop for a message antithetical to the teachings of Jesus," she told Cooper.

Asked by CNN's John Berman on "New Day" Tuesday if the President is a frequent visitor to the church, Budde said "no, he's not," adding, "He is not a man of prayer on Sunday morning."

"We know that. And he is not one to worship at St. John's regularly or any of the churches of our diocese," she said.

"This was a charade that in some ways was meant to bolster a message that does nothing to calm -- to calm the soul and to reassure the nation that we can recover from this moment which is what we need from a President, and that's what the faith communities stand for."

The episode follows nearly a week of protests across the country that at times have turned violent over the death of Floyd, a 46-year-old African American man who died at the hands of a police officer in Minneapolis.

While still at the White House Monday evening, Trump declared himself "your president of law and order," and vowed to return order to American streets using the military if widespread violence isn't quelled.

"If a city or state refuses to take the actions necessary to defend the life and property of their residents, then I will deploy the United States military and quickly solve the problem for them," he said.

The address came after he had been angered by news coverage depicting him holed up in an underground bunker amid protests in Washington. He told aides on Monday he wanted to be seen outside the White House gates, according to a person familiar with the matter, which is part of what drove the decision to stage the photo-op at St. John's Church.

But Budde stressed Monday that his presence in front of the church -- and his response to the nationwide protests -- were both unwelcome.

"What I am here to talk about is the abuse of sacred symbols for the people of faith in this country to justify language, rhetoric, an approach to this crisis that is antithetical to everything we stand for."

The Episcopal Church has repeatedly refuted Trump on a range of issues including proposed cuts to social services and the construction of a wall on the US southern border.

Michael Curry, the presiding Bishop of the Episcopal Church, said in a statement Monday that Trump had "used a church building and the Holy Bible for partisan purposes."

"This was done in a time of deep hurt and pain in our country, and his action did nothing to help us or heal us," Curry said.

And Greg Brewer, bishop of the Episcopal Diocese of Central Florida, tweeted that he was "shaken watching protestors in Lafayette Park gassed and cleared so that the President of the United States can do a photo op in front of St. John's Episcopal Church holding a Bible."

"This is blasphemy in real time," Brewer said on Twitter.

This is story has been updated with additional comment on Tuesday.

George Floyd's brother calls for an end to violence; 'That's not going to bring my brother back'