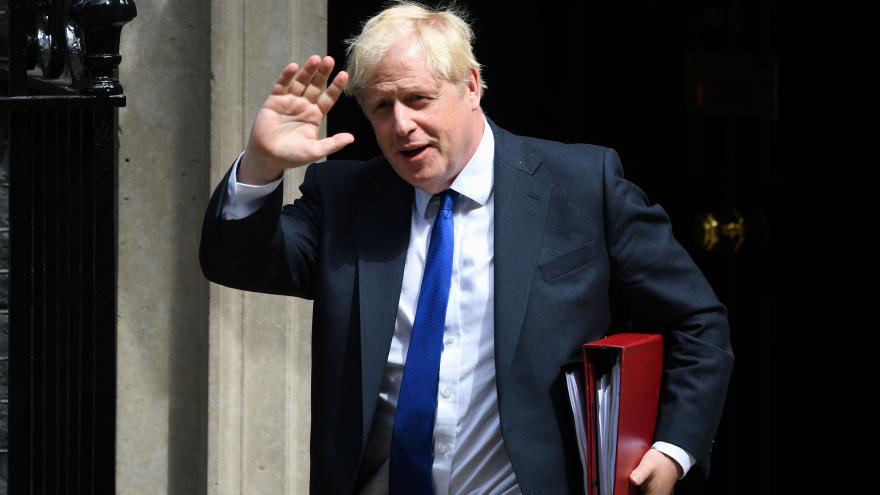 (CNN) -- Boris Johnson's scandal-ravaged premiership appeared on the brink of collapse Wednesday, after numerous ministers and former allies pulled their support for the beleaguered British Prime Minister and urged him to resign before he is forced from office.

Johnson began the day vowing to fight on, despite the shock resignations of his finance minister, health secretary and dozens of other lawmakers furious about the latest saga to engulf Downing Street: the handling of a resignation by Johnson's former deputy chief whip, Chris Pincher, who was accused of groping two men last week.

But a flood of resignations on Wednesday may now sink the Prime Minister, with MP after MP lambasting his dishonesty, accusing him of eroding standards in public life, and urging him to step down for the good of the country.

The spectacular disintegration of Johnson's political career could now be hours from completion; while he has so far refused to buckle, Conservative lawmakers were discussing reformulating their party rules and voting to oust him if needed.

By Wednesday evening, a delegation of cabinet ministers had reportedly descended on Downing Street to tell him to quit. Among them were Home Secretary Priti Patel -- one of Johnson's most loyal supporters -- who told the Prime Minister that the general view of the party was that he had to go, a source close to Patel told CNN.

"At some point, we have to conclude that enough is enough," former Health Secretary Sajid Javid, the first of many ministers to resign in the past 24 hours, told Johnson in Parliament earlier Wednesday. "I have concluded that the problem starts at the top, that is not going to change."

Five ministers resigned in one swoop on Wednesday afternoon, and as the working day came to a close Johnson had lost more than 30 members of his government.

His longtime ally and senior Cabinet minister, Michael Gove, also urged him on Wednesday afternoon to accept that his time is up, two senior advisers with knowledge of the situation confirmed to CNN. That news was first reported by Mail+, Daily Mail's digital platform. Gove's office had no official comment on the matter.

Earlier on Wednesday, Johnson remained adamant that he would not resign. "I'm not going to step down," he told a parliamentary committee, adding that "the last thing this country needs, frankly, is an election."

An endless series of scandals

Numerous Prime Ministers have been dumped from office by sudden and deadly rebellions within their own parties, with leaders typically choosing to resign once the writing is on the wall. But the speed with which Johnson's government has tumbled toward the precipice echoes few episodes in British political history.

Less than three years ago, Johnson secured a landslide election win and then enacted Brexit, a political revolution for which many within his party had clamored for decades. Even late last year, Johnson was in a healthy position in opinion polls. While the United Kingdom has the highest Covid-19 death toll in Europe, Johnson was buoyed by a popular vaccine rollout,

But then scandal after scandal wrecked his reputation among the public. He sought to overturn the suspension of an ally accused of misconduct; he was fined by police for attending one of many parties that took place in Downing Street during lockdown; he lost two MPs due to sex scandals, and then failed to regain their seats in by-elections; and this week, he admitted that he had been briefed on an allegation against Pincher before he promoted him to deputy chief whip, despite his ministers and aides initially claiming otherwise.

That Pincher saga finally caused Johnson's support base to cave in. Johnson narrowly survived a vote of no confidence in early June, but rebels have threatened to tweak party rules and allow another vote in the near future if Johnson doesn't resign -- and it would now be expected that he would lose.

A sullen-faced Johnson struggled through Prime Minister's Questions in Parliament and then fielded questions from MPs in a parliamentary committee meeting, during which even more of his allies pulled their support.

Johnson's efforts to cling to power were branded "pathetic" by the opposition leader Keir Starmer, who also turned his attack towards the few allies in his Cabinet still propping him up. "In the middle of a crisis doesn't the country deserve better than a Z list cast of nodding dogs?" Starmer asked in Parliament.

Should Johnson resign, a Conservative leadership campaign would begin and the winner would also take over as Prime Minister.

That person would need to navigate domestic issues, such as a cost of living crisis that has hit British households, and inherit a wealth of foreign pressures. Johnson has developed a good relationship with Ukrainian President Volodymyr Zelensky and been a leading player in Europe's response to Russia's invasion.