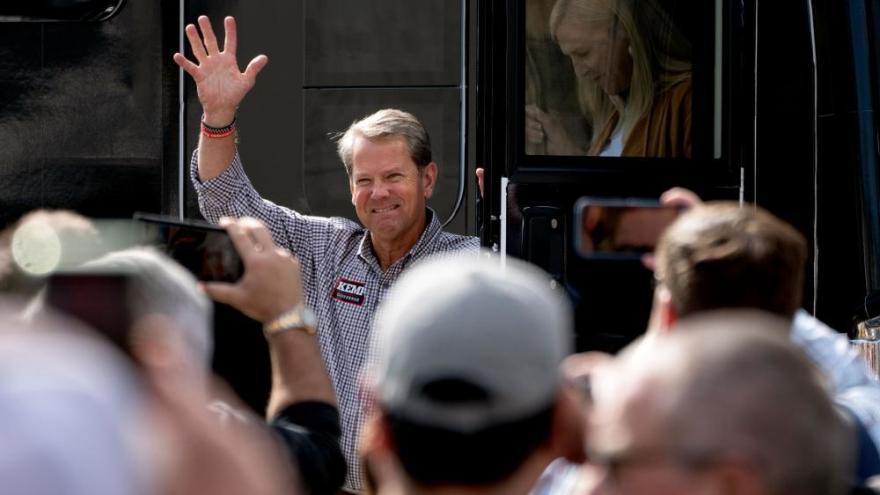 (CNN) -- Republican Gov. Brian Kemp will be reelected in Georgia, CNN projected, winning a rematch of his 2018 race against Democrat Stacey Abrams.

Kemp had been seen as the favorite in the race for months, with Abrams unable to capture the momentum she experienced in 2018 and hampered by broader voter discontent with Democratic control of Washington.

The victory reasserts Republican control of the executive office in Georgia just two years removed from Democrats winning both of the state's US Senate seats and President Joe Biden becoming the first Democrat to win the state since Bill Clinton in 1992.

Abrams' defeat is a tough blow for Democrats who have long sought to elevate her in a state that, until recently, had been dominated by Republicans. After losing to Kemp by less than two percentage points in 2018, Abrams was among the women considered to run alongside Biden. She is often touted as one of the most influential Democrats in the country, despite currently holding no public office.

Kemp's victory is a clear sign that economic arguments made by Republicans were more powerful in 2022 than Democrats' focus on abortion.

Abrams centered her campaign on the issue after the Supreme Court overturned Roe v. Wade over the summer. She told CNN in September that the issue was going to be "front and center in the conversation" -- specifically Kemp's signing of a bill that bans most abortions when early cardiac activity is detected, when many women don't yet know they're pregnant.

Kemp said on the campaign trail that he stood by that law, noting that it provided some exceptions. He instead spent much of his time focused on inflation, crime, and antipathy for Biden's administration.

"Georgians should know that my desire is to continue to help them fight through 40-year high inflation and high gas prices and other things that our Georgia families are facing right now, quite honestly, because of bad policies in Washington, DC, from President Biden and the Democrats that have complete control," Kemp said at his first debate against Abrams.