British pound plummets to record low against the dollar 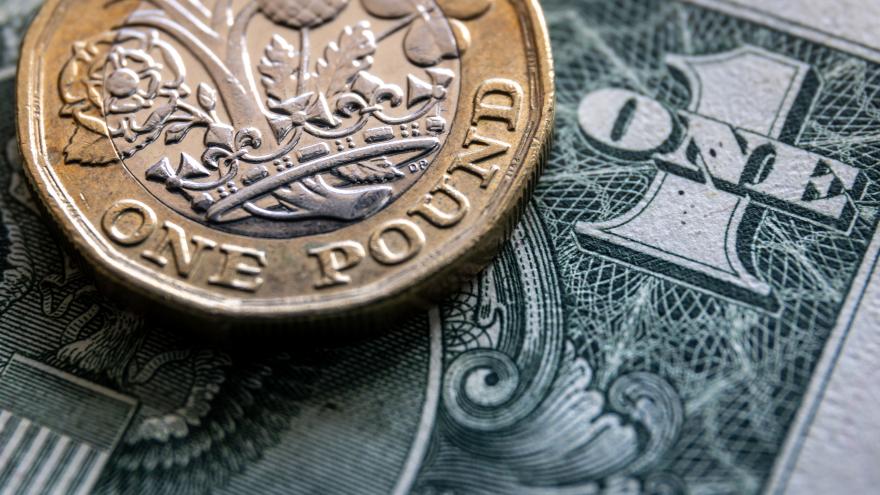 By Laura He, Jessie Yeung and Jonny Hallam, CNN Business

(CNN) -- The British pound crashed to a record low against the US dollar on Monday on growing fears about the stability of UK government finances.

The plunge of nearly 5% to just above $1.03 came during trading in Asia and Australia on Monday and extended a 3.6% dive from Friday, spurring predictions the pound could plunge to parity with the US dollar. It recovered slightly as European traders came online, rising back to $1.07.

The currency slump follows British Chancellor of the Exchequer Kwasi Kwarteng's announcement on Friday that the United Kingdom would implement the biggest tax cuts in 50 years at the same time as boosting government borrowing and spending.

The new tax-slashing fiscal measures, which include scrapping plans for an increase in corporation tax and slashing the top rate of income tax, have been criticized as "trickle-down economics" by the opposition Labour Party and even lambasted by members of the Chancellor's own Conservative party.

Kwarteng doubled down at the weekend, hinting in TV interviews Sunday of more tax cuts to come, saying Friday's measures were "just the start" as the government goes all out for growth.

Former Tory chancellor Lord Ken Clarke criticized the tax cuts on Sunday, saying they could lead to the collapse of the pound.

The pound has been hammered by a string of weak economic data, but also the steep ascent of the US dollar, a safe haven investment that sees inflows in times of uncertainty.

The euro also hit a 20-year low after Giorgia Meloni claimed victory in a general election in Italy. Investors are monitoring what would be the most far-right government since the fascist era of Benito Mussolini, which has raised concerns about cohesion within the European Union.

But the pound is suffering more than most due to the economic outlook in the United Kingdom, which faces the highest inflation among G7 nations, and the government's huge fiscal gamble on growth. It has lost nearly 21% so far this year, compared with a fall of 15% in the euro.

The previous record low for the British pound against the US dollar was 37 years ago on February 25, 1985, when one pound was worth a little over $1.05.

"Should there be any escalation to the war in Ukraine ... we would see further sharp downside in the pound as well as the euro," said Clifford Bennett, chief economist at ACY Securities, an Australian brokerage firm.

"One should not underestimate the crisis that is all of Europe at the moment and the pound is more vulnerable than most," he said.

China's yuan slid 0.5% on the onshore market to the lowest level in more than 28 months. The offshore yuan fell 0.4%.

The rapid declines prompted the People's Bank of China to impose a risk reserve requirement of 20% on banks' foreign exchange forward sales to clients, starting Wednesday. That should make it more costly to buy foreign currencies via derivatives, which might slow the pace of the yuan's decline.

Elsewhere in the region, the Japanese yen dropped 0.6% against the dollar to 144. Last Thursday, the Japanese central bank intervened in the currency market for the first time since 1998 to prop up the yen when it hit 145. The yen rebounded slightly following the intervention, but soon resumed the slide.

Stock markets in Asia were also in turmoil on Monday, after US stocks sold off on Friday as fears of a recession grew.

"Risk sentiments have been dealt a major blow by the Fed's latest policy action and guidance," said DBS analysts in a research report on Monday.

The Federal Reserve on Wednesday approved a third consecutive 75-basis-point hike in an aggressive move to tackle white-hot inflation that has been plaguing the US economy.

Even without the Fed action, Europe is facing a recession due to the war in Ukraine, and China is looking at "a substantially weak growth dynamic" because of domestic factors, the DBS analysts said.

"Add on top of that a sharp decline in US dollar liquidity and sharply higher US interest rates, the world economic outlook looks particularly precarious," they added.

Correction: A previous version of this story misstated the drop in the pound on Friday.