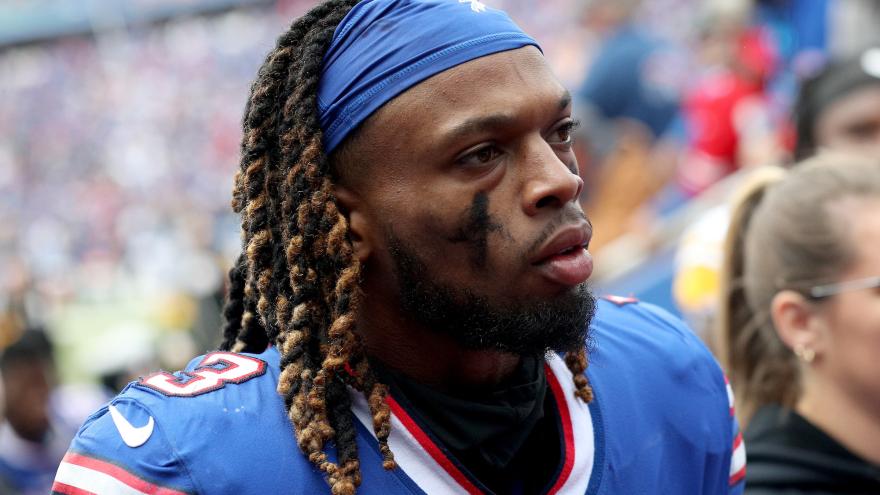 (CNN) -- More than two weeks after Buffalo Bills safety Damar Hamlin went into cardiac arrest during a game, a representative for Hamilin says the defensive player has a long road ahead of him.

Hamlin's longtime friend and business partner Jordon Rooney said to CNN: "Despite being out of the hospital, Damar still has a lengthy recovery.

"Damar still requires oxygen and is having his heart monitored regularly. He has visited with the team a few times but he still gets winded very easily. He's upbeat and positive and ready to continue to overcome this."

"It's limited, just overall, but he comes in and -- it really just started really today or yesterday -- just trying to get back to a little bit of a routine, just getting himself acclimated again, taking it one baby step at a time," said McDermott on Wednesday as he spoke about Hamlin.

"His appearance, like walking around here, it's a positive thing and to see three [Hamlin wears the No. 3 on his jersey] just smile and just wave and just put his hearts up and keep it pushing. It's a positive energy bubble that's just floating around the facility," said offensive lineman Dion Dawkins.

The Bills are set to play the Cincinnati Bengals -- the team Buffalo played against when Hamlin collapsed on the field -- on Sunday in the AFC divisional round at 3 p.m. ET.