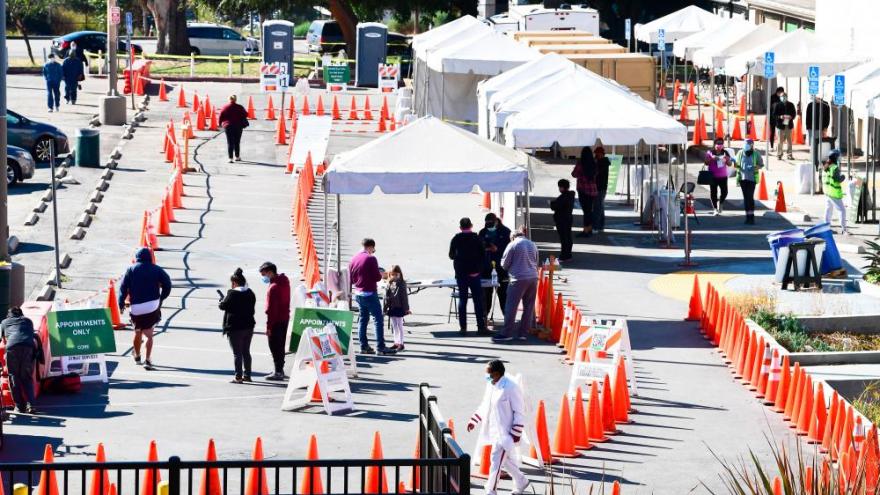 (CNN) -- California, which this week announced its 1 millionth Covid-19 case, is seeing the fastest rate of increase in the number of daily reported infections since the start of the pandemic, public health officials said Friday.

There has been a 47.1% increase in the number of new cases in a one-week period since the beginning of this month, according to Dr. Erica Pan, who is currently serving as the state's acting public health officer.

"This is almost a 20% faster rate of rise and the fastest rate of rise we have seen in California," Pan said. "When cases are increasing at this pace, it is really important for us to act quickly."

The state reported 6,893 additional cases of Covid-19 on Friday, a higher number of new infections than the state's seven-day average of 6,773 cases. The two-week test positivity rate has also increased from 3% to 4%, according to Pan.

A statewide travel advisory was implemented Friday along with Oregon and Washington, asking residents to refrain from any non-essential travel.

"Cases are on the rise here in California and we are concerned," California Health and Human Services Secretary Dr. Mark Ghaly said. "As I say to my patients often, 'When I'm worried, I'll tell you so you can worry with me,' and we're there."

Ghaly expressed his concerns over the increase of cases leading to hospitalizations.

"About two weeks after a set of cases is reported, we see about 12% of those cases end up in the hospital," he said.

Hospitalizations in the state have increased more than 30% in the past two weeks.

"This isn't the time to put our guard down," Ghaly said.

While he said there are no immediate plans for another statewide stay-at-home order, he suggested that there may be additional restrictions placed on some counties in the future.

'We have to keep a close watch'

The tier system is the framework California has set up that helps health officials determine which counties should tighten or loosen restrictions based on certain criteria, including test positivity, adjusted case rate and health equity metric.

Eight other counties also moved back a tier, indicating substantial or moderate risk in their area.

With the state's climbing numbers, no counties are moving forward to less restrictive tiers this week.

"A number of counties are indeed experiencing quite high levels of cases, not necessarily the highest they've ever seen but certainly compared to the lows we've been experiencing over the past couple of months ... we're certainly seeing almost all across the state an upward trajectory," Ghaly said earlier this week. "That gives us concern."

It's the first week since counties began moving to less restrictive tiers that no county moved forward, he added.

"We anticipate if things stay the way they are, that between this week and next week over half of California counties will have moved into a more restrictive tier," he said.