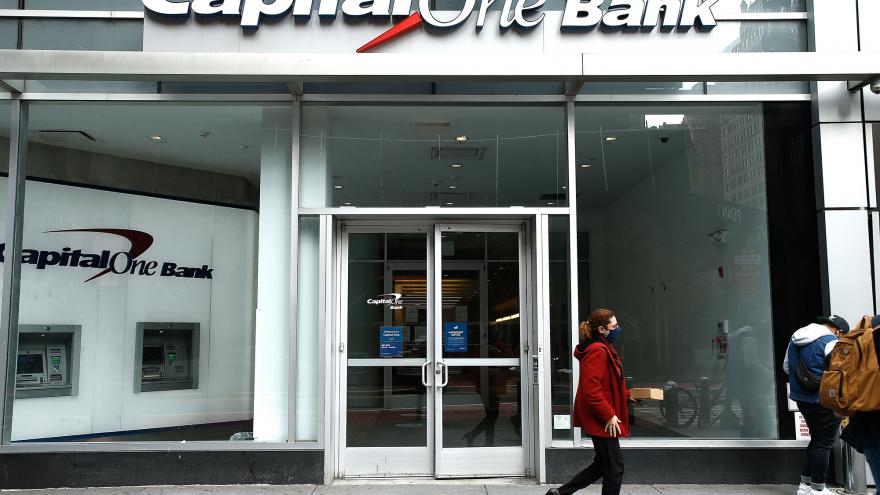 (CNN) -- What's in your wallet? If you're a Capital One customer, it might soon be more money: The company will be the first large bank to eliminate overdraft charges.

Capital One made the announcement Wednesday, saying is it getting rid of all fees for overdrafts and non-sufficient funds. It will also continue to allow customers to get free overdraft protection on their accounts.

That makes Capital One, which is the sixth-largest retail bank in the United States, the first top-ten bank to stop penalizing clients for taking out more cash or writing checks for more money than they have in their account.

"The bank account is a cornerstone of a person's financial life," said Capital One CEO Richard Fairbank in a press release, adding that "Overdraft protection is a valuable and convenient feature and can be an important safety net for families."

Advocacy groups hope is other banks will follow Capital One's lead in eliminating these fees, which have been moneymakers for companies that levy them.

"This move by Capital One will have tremendous benefits for the most vulnerable consumers," said said Lauren Saunders, associate director of the National Consumer Law Center, in Capital One's release. "It's critical we keep working to make the banking system more inclusive and fair for all."

Many lawmakers and regulators have criticized banks for penalizing already cash-strapped customers with onerous overdraft fees that have generated billions of dollars in revenue for financial institutions. Capital One had more than $425 billion in assets as of the third quarter and reported a profit of $3.1 billion in the three months that ended in September.

Senator Elizabeth Warren lambasted JPMorgan Chase CEO Jamie Dimon earlier this year, referring to him as "the star of the overdraft show."

The Consumer Financial Protection Bureau said in a statement Wednesday that banks pocketed nearly $15.5 billion in overdraft fees in 2019.

The CFPB added that more than 40% of the fees generated by big banks were brought in by JPMorgan Chase, Wells Fargo and Bank of America.

"Rather than competing on quality service and attractive interest rates, many banks have become hooked on overdraft fees to feed their profit model," said CFPB Director Rohit Chopra in a press release. "We will be taking action to restore meaningful competition to this market."

For its part, JPMorgan Chase said that it has already taken some actions on overdraft charges and non-sufficient funds fees.

"The CFPB's numbers don't reflect changes we made earlier this year to our overdraft services, which have already helped 1.7 million customers," said Elizabeth Seymour, a spokesperson for the bank, in a statement to CNN Business.

"We eliminated the non-sufficient funds fee and significantly increased the amount a customer can overdraw before overdraft fees are charged," Seymour added. "These changes reflect our continuous efforts to offer the best, most competitive products and services our customers want."

But one prominent analyst wrote that other banks may soon follow Capital One's lead — or else risk having regulators impose even tougher restrictions.

"Our expectation is that more banks will try to avoid CFPB enforcement actions," said Cowen Washington Research Group's Jaret Seiberg in a report.

"Enforcement actions are likely starting next spring. Enforcement is the fastest way for the CFPB to try to change banking industry behavior," he added.