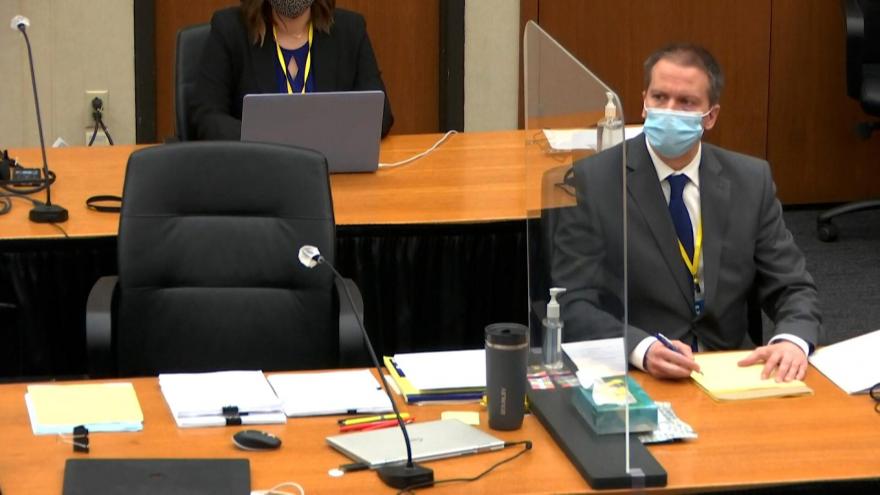 Former Minneapolis police officer Derek Chauvin attends court proceedings on April 12. Minnesota prosecutors are nearing the end of their case against Derek Chauvin in the death of George Floyd as the trial enters its third week of testimony.

(CNN) -- Pausing every so often to wipe away tears, Philonise Floyd testified Monday at Derek Chauvin's trial that his elder brother George Floyd was a big mama's boy who was distraught by her death in 2018.

"It was so unique how they were with each other. He would lay up onto her in the fetus position like he was still in the womb," he said. "Being around him, he showed us how to treat our mom and how to respect our mom. He just -- he loved her so dearly."

The heartfelt testimony came as prosecutors sought to humanize Floyd, the 46-year-old Black man who died last May after former Minneapolis Police officer Chauvin kneeled on his neck and back for more than 9 minutes.

Also on Monday, an expert cardiologist testified that Floyd died from cardiopulmonary arrest caused by low oxygen levels brought on by prone restraint and positional asphyxia -- making him the fifth doctor to say as much in the trial. In addition, a police use-of-force expert testified that Chauvin's actions were unreasonable and excessive.

After calling 38 witnesses over the course of 11 days, Minnesota prosecutors neared the end of their case against Chauvin. The defense is expected to begin calling its own witnesses on Tuesday, and closing arguments are expected for next Monday, Judge Peter Cahill said in court.

The prosecution's case against Chauvin came in three distinct phases: what happened to Floyd last May, the Minneapolis Police use-of-force policy and the medical analysis of why Floyd died.

In cross-examination and in opening statements, defense attorney Eric Nelson has focused on three arguments he says will acquit Chauvin: Floyd died of drug and health problems, Chauvin's use of force was ugly but appropriate, and the crowd of bystanders became hostile and distracted Chauvin from taking care of Floyd. Witnesses called by the prosecution have contested each of those theories -- but it will be up to the jury of five men and nine women to ultimately decide.

While the trial has focused on Chauvin and Floyd, the societal stakes of the high-profile case were made vividly clear when police shot and killed a Black man Sunday in the Minneapolis suburb of Brooklyn Center.

The law enforcement apparatus set up for the Chauvin trial, known as Operation Safety Net, moved into Phase 3 of its security presence earlier than anticipated due to the Brooklyn Center police shooting.

In light of the unrest, Nelson asked the court to question jurors further and sequester them for the rest of the trial. Judge Cahill rejected the request and said he plans to fully sequester the jury for deliberations next week. Jurors in the trial are currently partially sequestered, meaning they are released to go home each day.

Minnesota is unique in that it allows "spark of life" evidence -- a term stemming from a 1985 court case -- in which the victim's family or friends can speak about them on a personal level.

During Philonise Floyd's tearful testimony, prosecutors showed several photos of a smiling George Floyd with his mother, his basketball teammates and his young daughter. Philonise Floyd described his brother as an athlete and dedicated student of both basketball and football.

He said George Floyd helped take care of his siblings, but he didn't know how to cook -- so he made them banana mayonnaise sandwiches and syrup sandwiches.

"He was so much of a leader to us in the household, he would always make sure we had our clothes for school, make sure we would get to school on time," Philonise Floyd said. "He just was like a person that everybody loved around the community. He just knew how to make people feel better."

Their mother died in May 2018, and George Floyd was in pain during the funeral, he said. That was the last time they saw each other alive and in person.

"Both the knee across Mr. Floyd's neck and prone restraint were unreasonable, excessive and contrary to acceptable police practices," Stoughton said.

"No reasonable officer would have believed that was an appropriate or acceptable use of force," he added.

Prosecutors played more than a dozen separate video clips of Chauvin restraining Floyd, and Stoughton offered his analysis of what the officers did compared to a "reasonable" use of force. For example, he highlighted two instances in which an officer on scene asked to move Floyd from the prone position onto his side, but Chauvin declined.

"It would indicate to a reasonable officer that at least one officer did not feel that Mr. Floyd presented a level of threat that required them to keep him in that prone position," Stoughton said.

His testimony was similar to that of a Los Angeles Police Department sergeant who testified last week as an expert witness for the prosecution. In addition, a number of Minneapolis police supervisors and training coordinators have rejected Chauvin's actions as contrary to policy.

Dr. Jonathan Rich, a cardiologist based in Chicago, testified that Floyd's heart was unable to get enough oxygen because of how he was restrained. His review of the medical records, videos and autopsy findings also rejected claims that Floyd's death may have been due to drugs or heart issues, as the defense has suggested.

"I believe that Mr. George Floyd's death was absolutely preventable," he added. "In addition to not putting him in that position in the first place, when they -- when there were signs that he was worsening, repositioning him, I think, very likely would have saved his life."

Floyd had high-blood pressure and narrowed coronary arteries, but his heart muscle showed no evidence of injury at all, he said.

The doctor's testimony follows a series of medical experts who testified last week that Floyd died last May because of Chauvin's restraint. On Friday, the medical examiner who conducted Floyd's autopsy noted that Floyd's history of hypertension and the fentanyl and methamphetamine in his system played a role in his death, but they were not the direct cause.

"In my opinion, the law enforcement subdual, restraint and the neck compression was just more than Mr. Floyd could take by virtue of those heart conditions," Dr. Andrew Baker said.

The prosecution's case in three parts

The first week of testimony largely focused on Floyd's final moments and the distressed bystanders who watched Chauvin kneel on Floyd's neck and back for over 9 minutes while he was handcuffed and prone on the street. Video from the bystanders and police body camera footage showed Floyd's gasps for air and calls for his "mama" over those excruciating minutes, leaving several witnesses in tears.

Early last week, prosecutors called a series of police supervisors and use-of-force experts who criticized Chauvin's actions. They said he violated policies around de-escalation, objectively reasonable use of force and the requirement to render aid. Foremost among the critics was Minneapolis Police Chief Medaria Arradondo.

The medical testimony on Thursday and Friday, particularly from Dr. Martin Tobin, laid out the mechanics of how Floyd died. The renowned pulmonary critical care doctor testified Thursday morning that Floyd died from a "low level of oxygen" when Chauvin pinned him to the street and restricted his ability to breathe.

Floyd's preexisting health conditions and drug use were not relevant to his death, Tobin said.