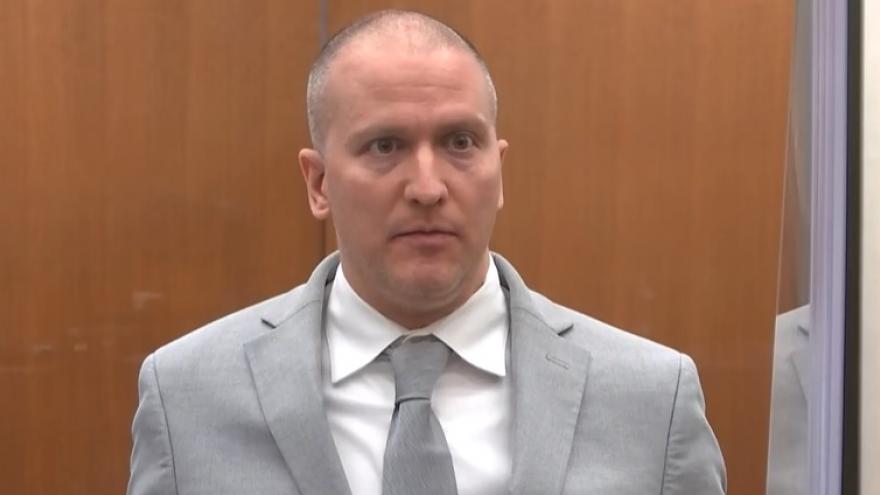 Derek Chauvin, the former police officer who killed George Floyd on a Minneapolis street last year, was sentenced Friday to 22 and half years in prison.

Chauvin, in a light gray suit and tie and white shirt, spoke briefly before his sentencing, offering his "condolences to the Floyd family."

Chauvin, 45, was convicted in April on charges of second-degree unintentional murder, third-degree murder and second-degree manslaughter for his role in Floyd's death.

Chauvin, 45, was convicted in April on charges of second-degree unintentional murder, third-degree murder and second-degree manslaughter for his role in Floyd's death.

After members of Floyd's family delivered victim impact statements, Chauvin stepped to the lectern beside his lawyer and said, "I want to give my condolences to the Floyd family." He said he could not say more because of pending legal matters.

Chauvin's post-verdict motion for a new trial was denied by a judge hours before the hearing.

Hennepin County District Court Judge Peter Cahill ruled Thursday night that Chauvin "failed to demonstrate ... the Court abused its discretion or committed error such that Defendant was deprived of his constitutional right to a fair trial."

Defense attorneys had argued that "errors, abuses of discretion, prosecutorial and jury misconduct" made the trial unfair.

The sentencing hearing opened with victims' impact statements, including an emotional video from Floyd's seven-year-old daughter, Gianna, who wore a bow wrapped around her hair.

"I ask about him all the time," the little girl said, responding to questions about her dad.

"I miss you and I love you," she said when asked what she would tell her father.

Chauvin, in a light gray suit, white shirt and tie, wore a mask as he listened from the defense table.

Floyd's two brothers and a nephew spoke about the birthday parties, graduations and other family milestones that he will miss.

Philonise Floyd said he has nightmares in which he hears his brother pleading for his life and calling out for their mother. He said he relives the video of his brother "being tortured to death" by Chauvin and the smirk on the former cop's face.

"My family and I have been given a life sentence. We will never get George back," he said.

Philonise wiped tears from his eyes as he spoke about Gianna. Terrence Floyd, another brother, struggled to speak as he asked for the maximum penalty.

"We don't want to see no more slaps on the wrist," nephew Brandon Williams said. "We been through that already -- in my community, in my culture."

Carolyn Pawlenty, Chauvin's mother, also grew emotional as she described him as her favorite son. She said the happiest moments in her life were when Chauvin was born and when she pinned his badge on his uniform for the first time.

"Derek, I want you to know I've always believed in your innocence, and I will never waver from that," she said.

Prosecutors for the state of Minnesota have requested a 30-year prison sentence, saying it "would properly account for the profound impact of Defendant's conduct on the victim, the victim's family, and the community," according to a sentencing memo.

Chauvin's defense attorney, Eric Nelson, argued that the former officer should instead receive probation and time served, or at least a sentence less than what the law guides.

"Mr. Chauvin asks the Court to look beyond its findings, to his background, his lack of criminal history, his amenability to probation, to the unusual facts of this case, and to his being a product of a 'broken' system," Nelson wrote in a filing.

The guilty verdict on all three charges against Chauvin came nearly a year after he impassively kneeled on the neck and back of Floyd, handcuffed and lying prone on the street, for 9 minutes and 29 seconds. Under the officer's knees, the 46-year-old Black man gasped for air, repeatedly exclaimed "I can't breathe" and ultimately went silent as a group of horrified bystanders looked on.

Floyd's final moments, captured on searing cell phone footage by a 17-year-old, illustrated in clear visuals what Black Americans have long said about how the criminal justice system treats Black people. Floyd's death set off mass protests across the globe as well as incidents of looting and unrest.

Three other officers who were on scene during Floyd's fatal arrest -- Tou Thao, Thomas Lane and Alexander Kueng -- have pleaded not guilty to charges of aiding and abetting. Their trial is currently set for March 2022.

How the sentencing will go

Chauvin is being sentenced at the Hennepin County Government Center.Cahill, who oversaw the trial, will likewise decide the sentence.

Chauvin will have an opportunity to speak before he is sentenced.

Since his conviction, Chauvin has been held at Minnesota Correctional Facility-Oak Park Heights, outside of Minneapolis, and was put into a segregated housing unit for his own safety, a prison spokesperson said. The Minnesota Department of Corrections will decide on where Chauvin will serve his time after receiving Cahill's sentencing order, spokeswoman Sarah Fitzgerald told CNN.

Chauvin has no prior criminal record, so Minnesota's sentencing guidelines recommend about 12 and a half years in prison for each murder charge and about four years for the manslaughter charge.

The sentences for the charges will likely be served at the same time, rather than consecutively, per sentencing guidelines. That means the sentence for second-degree murder will be of primary importance.

In this case, state prosecutors asked for a tougher sentence than the recommendations provide, citing five aggravating factors they said applied. Judge Peter Cahill has ruled that four of the five factors were proven beyond a reasonable doubt: (1) Chauvin abused a position of trust and authority, (2) he treated Floyd with particular cruelty, (3) children were present during the offense, and (4) Chauvin committed the crime as a group with the active participation of at least three other people.

The findings allow the judge to sentence Chauvin beyond what the guidelines recommend.

Over about three weeks of testimony in court, Minnesota prosecutors repeatedly told jurors to "believe your eyes" and rely on the infamous video of Floyd.

"This case is exactly what you thought when you saw it first, when you saw that video. It is exactly that. You can believe your eyes," prosecuting attorney Steve Schleicher said in closing arguments. "This wasn't policing. This was murder."

The defense called seven witnesses -- but not Chauvin himself, as he invoked his Fifth Amendment right not to testify. Nelson argued that Chauvin's use of force was reasonable, that he was distracted by hostile bystanders and that Floyd died of other causes.

Chauvin faces other legal issues as well. A federal grand jury indicted all four former officers in connection with Floyd's death, alleging they violated his constitutional rights, according to court documents filed in federal court in Minnesota. They are due to be arraigned on the charges in September, according to a court filing.

Chauvin also was charged in a separate indictment related to an incident in which he allegedly used unreasonable force on a Minneapolis 14-year-old in September 2017, the Justice Department said in a statement. He is also expected to be arraigned in that case in September, according to court filings.