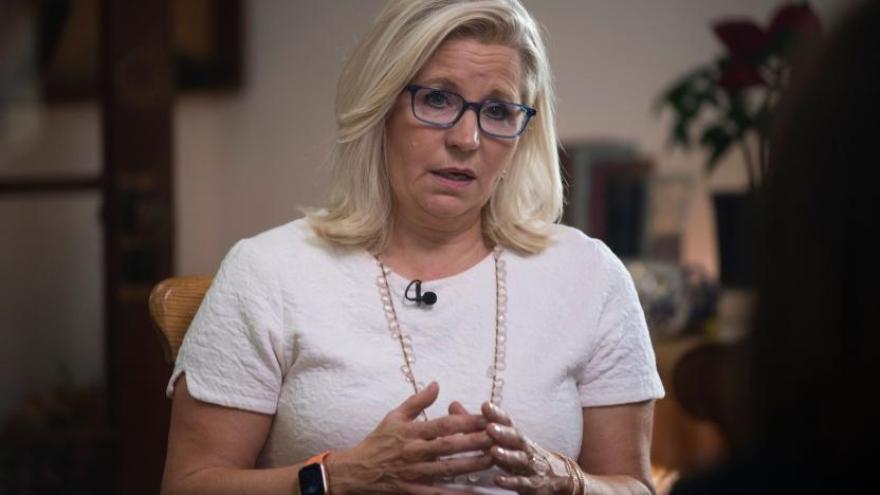 Wyoming Rep. Liz Cheney, pictured here on August 3, said if the Justice Department does not prosecute former President Donald Trump for his role in the insurrection at the US Capitol, the decision could call into question whether the United States can "call ourselves a nation of laws."

By Eric Bradner, CNN Photographs by Rachel Woolf for CNN

(CNN) -- Wyoming Rep. Liz Cheney said if the Justice Department does not prosecute former President Donald Trump for his role in the insurrection at the US Capitol and "the facts and the evidence are there," the decision could call into question whether the United States can "call ourselves a nation of laws."

In an interview with CNN's Kasie Hunt, Cheney -- the GOP vice chair of the House select committee investigating the events surrounding the January 6, 2021, insurrection -- said Trump is "guilty of the most serious dereliction of duty of any president in our nation's history" and pointed to a judge who's said he likely committed crimes. She said the House committee is "going to continue to follow the facts. I think Department of Justice will do that. But they have to make decisions about prosecution."

"Understanding what it means if the facts and the evidence are there, and they decide not to prosecute -- how do we then call ourselves a nation of laws? I think that's a very serious, serious balancing," Cheney said.

"The question for us is, are we a nation of laws? Are we a country where no one is above the law? And what do the facts and the evidence show?" Cheney said.

She sidestepped questions about whether Trump being prosecuted by President Joe Biden's Justice Department would only add to his strength with the Republican Party's base ahead of the 2024 presidential bid that Trump has repeatedly teased.

"I don't think that it's appropriate to think about it that way," said Cheney, who's facing a Trump-backed challenger in a primary later this month.

She alluded to Judge David Carter, a federal judge in California who ordered right-wing attorney John Eastman to turn over 101 emails from around January 6, 2021, writing in March that he "finds it more likely than not that President Trump corruptly attempted to obstruct the Joint Session of Congress on January 6, 2021."

"I think he's guilty of the most serious dereliction of duty of any president in our nation's history," Cheney said of Trump. "You've had a federal judge in California say that it's more likely than not that he and John Eastman committed two crimes."

Cheney's comments come as the House panel prepares for a busy August. A committee spokesperson also said last week that the committee intended to share 20 transcripts with the Justice Department, a move that comes as the department's criminal investigation into January 6 is heating up.

The House committee is preparing to release its final report ahead of November's midterm elections.

Cheney faces a series of Trump-aligned challengers in her August 16 primary, including the Trump-endorsed Harriet Hageman, a former Wyoming national Republican committeewoman who has advanced conspiracy theories about the 2020 election.

Cheney is the daughter of former Vice President Dick Cheney. Her reelection campaign unveiled an ad on Thursday in which the former vice president lays into Trump over his lies about widespread fraud in the 2020 election.

"He tried to steal the last election using lies and violence to keep himself in power after the voters had rejected him," the former vice president says in the spot.

"He is a coward. A real man wouldn't lie to his supporters. He lost his election and he lost big. I know it, he knows it and, deep down, I think most Republicans know it," Dick Cheney adds.

Liz Cheney wouldn't say whether her father has urged her to run for president in 2024.

She said the former vice president shares "this real sadness, frankly, about what's happening to our party, and a real despair about how it could be that so many Republicans would refuse to stand up and tell the truth."

"And it is a scary moment for the nation," she added.

Cheney says more to come from the committee this fall

Liz Cheney, who has courted Democratic voters in Wyoming's primary, said she doesn't see the House committee's work through the lens of political outcomes.

Cheney said the House panel will continue to lay out evidence in the coming months and that she expects the committee to "have an opinion" about making criminal referrals to the Justice Department.

"There's much more that we have not yet shared in hearings and that we anticipate we will share in the fall," she said. "And we will also make decisions about criminal referrals. And ultimately, the decision about prosecution's up to the Justice Department. But I would anticipate that the committee will have an opinion on it."

Cheney said that during the committee's probe, she has learned that Trump's effort to block the 2020 election results were "a more sophisticated and broader-reaching effort than I understood coming into it."

"I think all of us on the committee have had that same reaction, which is that there's so much, there was so much more that was happening in multiple different areas, whether it was the pressure on state officials or the pressure on the Justice Department" or efforts to push former Vice President Mike Pence to reject some states' electoral votes.

"The volume of information has been more than I expected," she said.

Cheney praised Pence for rejecting the pressure from Trump. She said Pence, who, as vice president oversaw the session of Congress in which electoral votes were officially counted, "was a hero on January 6."

"It's very clear that there was tremendous pressure from a number of different places on him. And he did his duty and he didn't succumb to that pressure and if he had succumbed to that pressure, things would have been very different," she said. "And so I think that that we owe him gratitude for how he conducted himself and for his refusal to do what Donald Trump wanted him to do, which would have been illegal."

Cheney said she expects to win her primary in less than two weeks, despite her opponents attacking her role on the committee.

However, the congresswoman also made clear that she is not tempering her criticism of Trump at all -- even if it costs her the House seat that her father held and that she has held since 2017.

"We're in a situation where former President Trump has betrayed the patriotism of millions and millions of people across our country, and many people here in Wyoming, and he's lied to them," she said. "And what I know to do is to tell the truth, and to make sure that people understand the truth about what happened and why it matters so much."

Asked why she thinks voters believe Trump, Cheney added: "It's just consistent lying about what happened about the election, playing on people's patriotism. And he's so dangerous that, you know, my view is that at the end of the day, if defending the Constitution against the threat that he poses means losing a House seat, then that's a sacrifice that I'm willing to make. I don't intend to lose. But some things are more important than any individual office or political campaign."

Cheney would not discuss her political plans after this month's primary. But she said she will do "whatever is necessary" to keep Trump from becoming the GOP presidential nominee for a third consecutive election in 2024.

She said she intends to be "a big part of making sure that we protect the nation" from Trump, whether she wins reelection or not.

Cheney also urged members of both parties to band against GOP candidates who have advanced Trump's lies about election fraud and are seeking to take over the election machinery of key states this fall.

Republicans in recent months have nominated candidates who have embraced Trump's lies about election fraud for offices that control the election machinery in a series of states, including some of the nation's most competitive presidential battlegrounds: Arizona, Nevada and Pennsylvania. The party has also endorsed an election denier for the top elections post in Michigan.

"I don't think anybody should vote for any election denier," Cheney said. She cast defeating those candidates as critical to stopping Trump from circumventing the will of American voters if he is nominated for president in 2024.

Cheney lambasted Democrats for meddling in GOP primaries to boost election deniers that they think will be less viable general election candidates, as was the case in the primary defeat this week of Republican Rep. Peter Meijer of Michigan, one of the 10 Republicans in the House who voted to impeach Trump following the insurrection. The Democratic Congressional Campaign Committee pumped more than $300,000 into television ads to boost Trump-endorsed John Gibbs against him.

Cheney said Democrats' involvement in the race was "terrible."

"All of us, again, across party lines, have got to make sure that we are supporting people who believe fundamentally in our democratic system," she said. "And so I think that it's inexplicable and wrong for the Democrats to be funding election deniers, particularly against one of the 10 Republicans who so bravely stood up and did the right thing."

CLARIFICATION: This headline and story have been updated to clarify the conditions that Cheney thinks would call into question the US as a "nation of laws" and to include additional information from the interview.