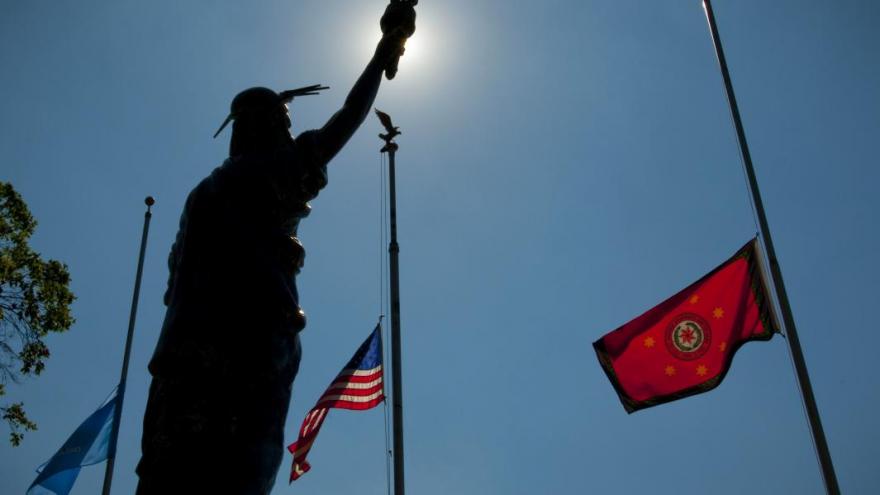 The Cherokee Nation has named an official representative to Congress for the first time.

(CNN) -- The Cherokee Nation has named an official representative to Congress for the first time.

Kimberly Teehee, executive director of government relations for the Cherokee Nation, was approved by the Council of the Cherokee Nation as a delegate to the US House of Representatives on Thursday, fulfilling a promise made to the tribe in a nearly 200-year-old treaty with the federal government.

A former senior policy adviser for Native American Affairs during President Barack Obama's administration, she was nominated by Chuck Hoskin Jr., chief principal of the Cherokee Nation. She is also a former senior adviser to the US House Native American Caucus Co-Chair former Rep. Dale Kildee and has held various positions within the Cherokee Nation.

The treaty doesn't specify if Teehee would be a voting member of the legislature, and her appointment requires congressional approval. But Hoskin said her role may be similar to those who represent Washington, DC, and five US territories -- Puerto Rico, American Samoa, Guam, the US Virgin Islands and the Northern Mariana islands -- who can't vote on the House floor but can introduce legislation, vote in their respective committees and debate on the floor.

Teehee said in a statement to CNN on Tuesday she is "humbled" to be nominated for an "extraordinary responsibility" and is grateful for an opportunity to serve the Cherokee Nation.

"This journey is just beginning and we have a long way to go to see this through to fruition," she said. "However, a Cherokee Nation delegate to Congress is a negotiated right that our ancestors advocated for, and today, our tribal nation is stronger than ever and ready to defend all our constitutional and treaty rights. It's just as important in 2019 as it was in our three treaties."

Teehee's historic nomination stems from a 1835 Treaty of New Echota in which the Cherokee were forced to leave their homes in the Southeast and go to present-day Oklahoma in exchange for money and other compensation. Nearly 4,000 citizens of the tribe died from disease, starvation and exhaustion on the journey known today as the Trail of Tears. As a way to compensate the tribe, the US government promised them a delegate in the House of Representatives.

Hoskin Jr. said Teehee is "extremely qualified" for the position and, through her nomination, the Cherokee Nation is "exercising our treaty rights and strengthening our sovereignty."

"We know this is just the beginning and there is much work ahead, but we are being thorough in terms of implementation and ask our leaders in Washington to work with us through this process and on legislation that provides the Cherokee Nation with the delegate to which we are lawfully entitled," he said in a statement to CNN on Tuesday.

Victoria Vazquez, deputy speaker of the council, said Teehee's political experience made her confirmation as delegate an "easy decision."

"Ms. Teehee has a wealth of experience working in Washington, DC with representatives from both sides of the aisle. She also has a storied career of advocating and working on issues for both the Cherokee Nation and Indian Country in general," Vazquez said. "These two attributes make her appointment as the first-ever delegate an easy decision and I am happy to support her nomination and Chief Hoskin's efforts to exercise our treaty rights."