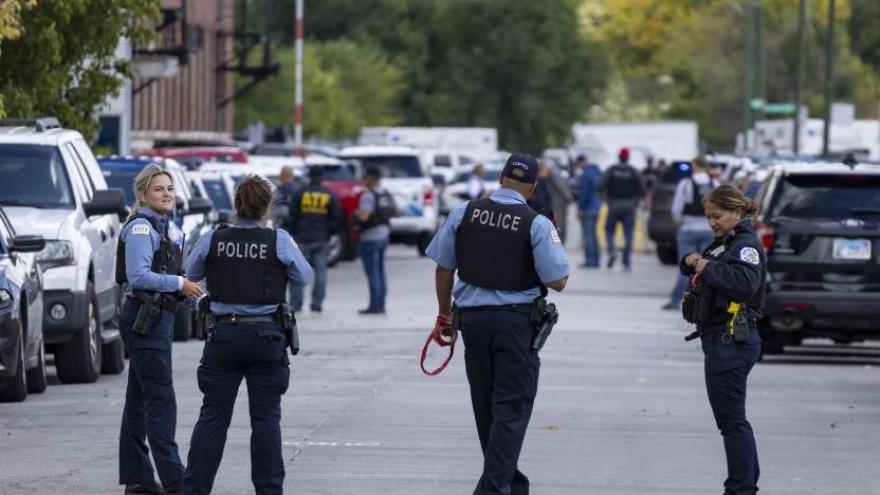 Chicago police are seen here investigating a shooting at the Homan Square police facility on September 26, after a man climbed five stories on a fire escape and entered the training room, officials said.

(CNN) -- A SWAT training session at a Chicago police facility turned into a real-life dangerous situation Monday morning when a man climbed five stories on a fire escape and entered the training room, officials said.

After entering through a door that was propped open, the man grabbed at least two guns that did not have live rounds in them from a table in the room and pointed them at officers, Chicago Police Superintendent David Brown said during a news conference.

The suspect, whom police haven't named, was shot by responding officers and hospitalized with non-life-threatening injuries, Brown said.

The incident began when the man approached the building and asked a guard where he could retrieve personal property, Brown said

Instead of heading for the public entrance, the man then walked around the Homan Square building until he reached an exterior fire escape staircase and climbed to the fifth floor.

"There is SWAT training occurring on that fifth floor, and the exterior door to that training is propped open because there's no windows or ventilation on that particular floor," Brown explained.

Officers saw the man enter the training area and grab two weapons off a table, the superintendent said.

"These were guns that were being watched," Brown said. "Obviously, someone coming from a stairwell outside startled everyone."

Officers in the training room notified other armed officers in the building who responded immediately and fired at the suspect, Brown said, without detailing where suspect was shot.

One officer suffered a sprained ankle while responding to the incident, Brown said.

The Civilian Office of Police Accountability (COPA) is conducting an investigation into the shooting.