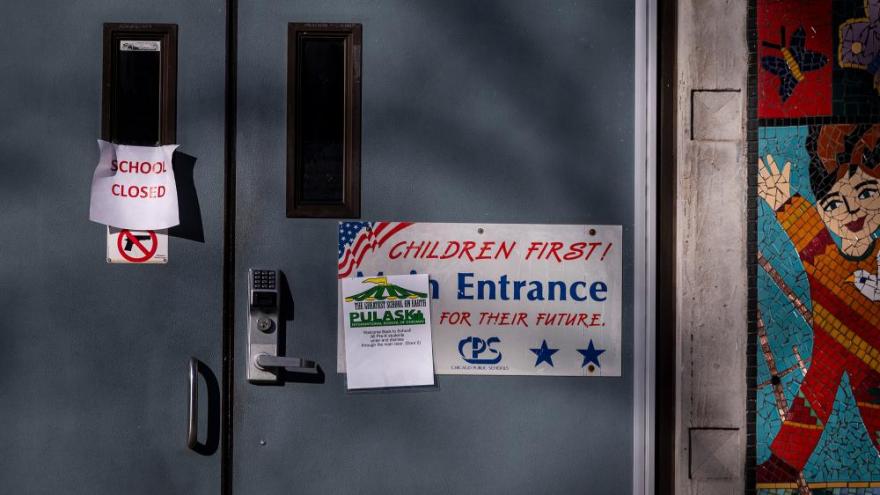 Chicago students are expected back in classrooms on January 12, after the city and teachers struck a deal over Covid-19 safety measures, and pictured, a "school closed" sign hangs at an entrance to the Pulaski International School of Chicago after classes were canceled.

(CNN) -- The roughly 25,000 rank-and-file members of the Chicago Teachers Union narrowly voted in favor of the safety agreement struck between the union and the district to return to class in person, a union official confirmed to CNN on Wednesday evening.

The vote passed with 55.5% approval, according to the official.

"This vote is a clear show of dissatisfaction with the boss. It's outrageous that teachers, school nurses, counselors and more had to endure a week of being locked out by the mayor just to get a commitment from her bargaining team to provide every student with an N95 mask in a pandemic," said CTU President Jesse Sharkey in a statement.

"Our members' vote today represents a union's, and a city's, frustration with a mayor that has simmered since the beginning of this pandemic," Sharkey said.

Mayor Lori E. Lightfoot tweeted a statement Wednesday night saying she and the school district were pleased to come to an agreement with the CTU "that guarantees predictability and stability for the rest of the school year."

"We all agree we must prioritize the health and well-being of everyone in our school communities including our kids, families and staff," Lightfoot tweeted. "The science tells us the safest place for our students is in the classroom."

In a statement, Lightfoot said in addition to the more than $100 million already spent on Covid-19 mitigation, "CPS is providing KN95 masks, augmenting its every school-every week testing program & strengthening its contact tracing approach."

"CPS principals will continue to work w/their school-based safety teams to make data-informed decisions in the best interests of students & families. We encourage families to get their kids vaccinated and consent to regular testing," the mayor tweeted.

The new agreement comes nearly two days after the union's House of Delegates voted to suspend its work action, effectively ending the standoff with Chicago Public Schools. The rank-and-file vote was the final hurdle.

Teachers in the nation's third-largest school district returned in person to schools Tuesday -- with students returning Wednesday -- after classes were canceled five days in a row amid a dispute between the teachers union and the district over Covid-19 safety protocols.

The new deal in Chicago follows agreement among the sides on KN95 masks for students and staff for the rest of the school year; the availability of weekly Covid-19 testing; and parameters for when a school could switch to remote teaching.

The dispute highlighted a debate playing out in school districts across the country as they grapple with balancing the advantages of in-person instruction with health concerns during the rapid surge of the Omicron variant.

"I'm a biology teacher, so I know a lot about viruses. And this virus is dangerous," Riegert told CNN.

Riegert still has trouble breathing after her infection over the holiday break, she said. On Wednesday morning, hours before the 4 p.m. CT deadline to vote on the deal, Riegert said she had not yet decided which way to vote.

In the meantime, 14-year-old Summer Dailey is thrilled to be back in school, she told CNN.

"Not being in school has been like really kind of sad and boring for me," the Jones College Preparatory High School freshman said.

"I love going to school, personally. So I just really wanted to go back to school. I'm really excited to be back."

Xuan-Vu Nguyen, whose 12-year-old son is a student in the district, said she's also relieved schools are reopening.

"My first reaction was, 'Yay!'" But she added: "We're anxious about if and when this is going to happen again at no notice whatsoever."

Parents didn't get a lot of warning of the school closures and her family had to drop everything to accommodate the change, Nguyen said, which left her feeling frustrated.

"I was, as a parent, left with no power -- nowhere to voice my concerns, nowhere to ask questions, really, about when this was going to end."

Kathryn Rose, a Chicago teacher and parent, said she was eager to get back to school.

"I'm certainly relieved to go back to the classroom and see my students, and my kids are really excited to go back, too," she said.

"It's been frustrating to sit at home, healthy, and wanting to be in the classroom."

Rose always felt safe with the school's mitigation measures and didn't feel a districtwide shutdown was necessary, she said.

"When you shut down schools, you're ignoring the multitude of dangers outside of the classroom, like abuse and hunger and lack of heat and violence," she said. "And these are things that families in Chicago are really struggling with."

Melanie Lopez, a CPS teacher and the mother of 7-year-old twin girls, said she knows that at this point sending her kids to school is just what she has to do.

"I trust their teachers are going to do everything possible. ... It's just certain things are out of their control," she said. "I've tried to teach my daughters as best as possible, make sure you're wearing your mask, make sure you're giving personal space."

Lopez said she still feels uncertainty about how this recent agreement will hold and wants to better plan for what's next. She told CNN she felt "like this is kind of limbo right now."

Increased testing is part of the proposed deal

As part of the deal, Covid-19 testing in schools will ramp up to 10% of students in each school being tested each week, CTU chief of staff Jen Johnson said.

The mayor's office will work with the teachers union on engaging families to increase testing consents, Mayor Lightfoot said. "That's a critical part of it," she said. "We want to get to as high a number in testing consents as we possibly can."

The tentative deal also includes details on contact tracing and new incentives to increase the number of substitutes in the district, the mayor said.

The two sides also "reached an agreement on the metrics for, at a school-based level, for when we needed to convert a classroom or school to go remote. Not surprisingly, the component parts of that depend upon staff and or student absences," she said.

Voting by the union's rank-and-file members began late Tuesday and is expected to be open for 24 hours, in time for a regularly scheduled CTU House of Delegates meeting Wednesday afternoon, a union official told CNN.

The impasse in Chicago began last week when the union voted to begin teaching virtually due to rising Covid-19 cases in the school system. In response, the school district canceled classes during negotiations.

On January 4 -- the last day students were in classrooms before the temporary shutdown -- Chicago Public Schools reported 422 new Covid-19 cases among students and 271 new cases among adults -- both record highs for the academic year.

Nationwide, the vast majority of schools are operating as normal, but there were at least 2,685 schools not offering in-person learning as of Tuesday, according to data company Burbio, which aggregates data based on school calendars and other sources.

In Los Angeles, the nation's second-largest school district, 66,000 cases of Covid-19 were reported among students and staff as they got back to in-person instruction Tuesday. The district required a Covid-19 test for all students and employees, regardless of vaccination status, before they returned from winter break. Superintendent Megan Reilly said every adult on school campuses and more than 80% of students older than 12 are fully vaccinated against Covid-19.

Nevada's Clark County School District -- the fourth-largest in the US -- is taking a "five-day pause" starting Friday to deal with its "extreme staffing shortages based on the high number of positive Covid-19 cases." Students will not have school Friday or on January 18; Monday was already scheduled as a day off for Martin Luther King Jr. Day.

In Philadelphia, nearly a third of the city's schools have shifted to remote learning because of a combination of the threshold level of positive cases of Covid-19 and a review of staffing data. "We will continue to make school-by-school decisions based on the most current staffing data, and ask that you prepare for the possibility of virtual learning at any time," Superintendent Dr. William Hite said in a statement Tuesday.

Cincinnati Public Schools are temporarily going remote because of "ongoing staff shortages that are the result of increased community spread of Covid-19," the district said in a statement Monday.

Schools in Santa Fe, New Mexico, will go virtual beginning January 18, with a return to in-person instruction planned for January 24 "if conditions improve," according to a statement from the district. The shift is due to a spike in Covid-19 cases, Superintendent Larry Chavez said.

"SFPS ended last week with 361 cases involving students and staff, the largest ever in one week for our district, with many still being investigated," he said. "Cases could rise to near 600 this week, and we have seen increased spread in classrooms."