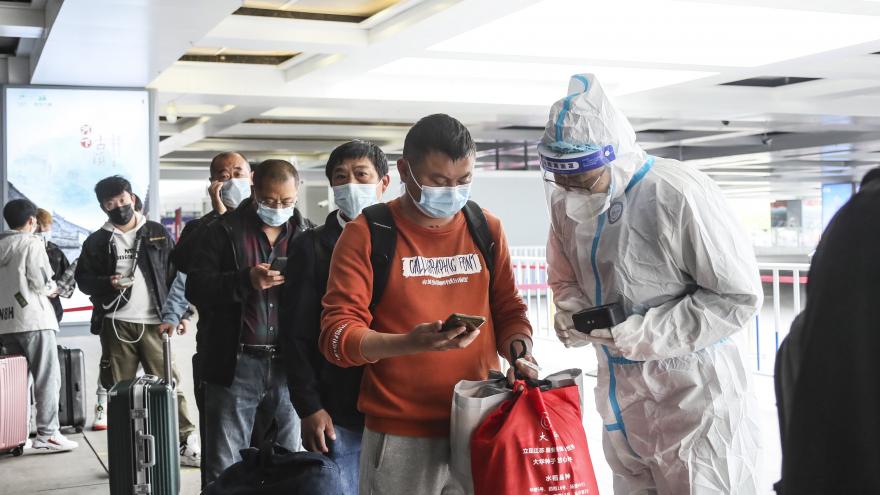 (CNN) -- Authorities in China have imposed a de facto international travel ban, forbidding citizens from going overseas for "non-essential" reasons, as the government ramps up efforts to enforce its zero-Covid policy.

In a statement Thursday, the Chinese National Immigration Administration said it would tighten its reviewing process on issuing travel documents such as passports, and strictly limit those looking to leave.

The administration justified the measures by claiming it was necessary to "reduce the risk of infection when leaving the country, and of carrying the virus when entering the country." Travel will only be permitted for "essential" purposes, defined by the administration as resuming work, study, business and scientific research, as well as seeking medical care.

Those who need to go abroad to help with fighting the pandemic, or transporting disaster relief resources will have their applications expedited, according to the announcement.

Officials did not reveal how they might enforce the new restrictions, or prevent would-be travelers in possession of valid travel documents from leaving.

The new measures represent China's most stringent restrictions on outbound travel in decades, placing further strain on a population that has endured more than two years of draconian Covid-19 controls including citywide lockdowns, mass testing and mandatory quarantine.

Others speculated officials might be cracking down on travel because more people are looking to escape as fears rise over new government-enforced lockdowns -- especially in the capital Beijing, where Covid cases are rising. These fears have only been exacerbated by the chaos and dysfunction that has engulfed locked-down cities such as Shanghai.

"Those who want to flee from China are scared that people's rights and dignity are nothing in the face of the government's absolute power (amid the outbreak)," one Weibo comment read.

"Are we going back to the national seclusion policy of the Qing Dynasty?" another user wrote, referring to China's last imperial dynasty whose final years in the late 19th and early 20th centuries were marked by the country's growing isolation from the rest of the world.

Outbound travel among ordinary Chinese was still heavily restricted until the early 2000s -- but it boomed as household incomes rose and the government relaxed rules. Chinese citizens made 670 million overseas trips in 2019, the last normal travel year before the pandemic, according to the country's Immigration Administration.

But that number has plunged since then, with just over 73 million inbound and outbound trips in 2021.

Even before Thursday's announcement, traveling in or out of China had become immensely difficult. The borders are still largely shut to outsiders, with only Chinese citizens returning from overseas and those with special visas or residence permits allowed to enter. Flights are limited and expensive -- and all those wishing to enter usually face a strict quarantine of up to 21 days.

China has further discouraged travel by dramatically scaling back the number of travel documents issued. It only issued 7.98 million documents in 2021, less than 6% of the documents issued in 2019, according to the Immigration Administration -- which also announced it would stop renewing passports for "non-essential" travel in February.

Thursday's restrictions deal a blow to Chinese residents married to foreign nationals. It might also prove another roadblock for students wishing to attend university overseas -- who already faced disappointment this week after the United States College Board announced it would cancel Advanced Placement (AP) tests -- often considered an important part of college applications in the US -- in several locations, citing "widespread Covid restrictions."

Public frustration has been growing steadily over the past few months as authorities across the country imposed lockdown measures -- sometimes over just a handful of cases.

At least 32 cities across China are now under full or partial lockdown, impacting up to 220 million people, according to CNN's calculations.

The most notable among them is Shanghai, the wealthy financial hub, which has been under citywide lockdown since late March. Throughout April, residents stuck at home reported being unable to access food, medicine or other essential supplies.

In recent days, complaints have surfaced on social media over community workers forcibly entering people's homes without permission and damaging their personal belongings during disinfection. One viral video showed residents arguing with police officers trying to take them from their homes; it's unclear under what policy the residents were being forcibly removed, or where they were being sent.

Fears are rising that the nation's capital could be next. Beijing authorities have encouraged residents to stay home, and began rolling out several new rounds of mass testing -- prompting panic buying at supermarkets, with photos showing long lines as residents rushed to stock up on supplies in case of a lockdown.

Beijing officials refuted claims of an impending lockdown on Thursday and urged the public not to hoard food, asserting there were enough supplies available. But their reassurance may do little good, with public trust already frayed -- especially since Shanghai's citywide lockdown had come just days after authorities there denied any such plans.

"This is a familiar picture," one Weibo user remarked under a video showing Beijing officials trying to calm the public. Another wrote: "After the lessons learned, who dares to take the risk?"