Chipotle is selling a cilantro soap — and people can't get enough 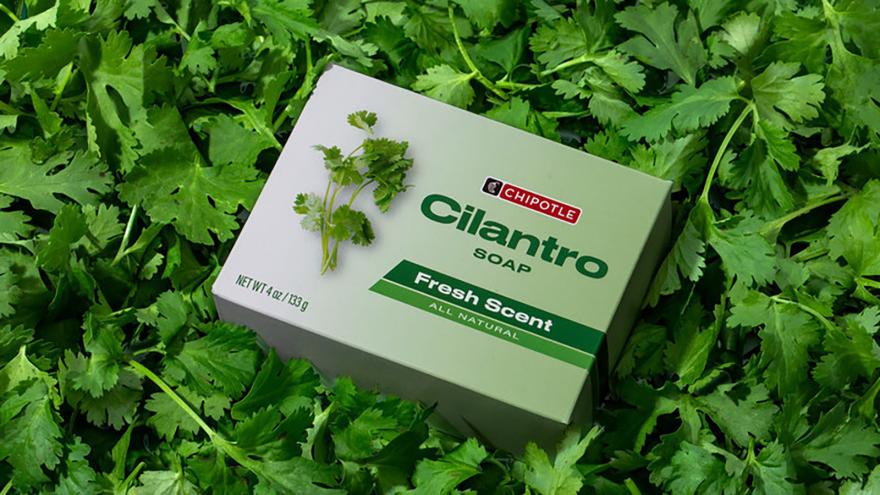 (CNN) -- Some people think cilantro is delicious. To others it tastes like soap. And now Chipotle is bringing both sides together.

Chipotle launched a $8 Cilantro Soap bar, made of organic oils and coriander essential oil — and it's already sold out a day after launch.

The strange and silly stocking stuffer comes after Chipotle posted a mock (or what then was thought to be mock)photo of a cilantro soap on Instagram in August, engaging both haters and fans of the herb.

Cilantro has been one of Chipotle's most polarizing ingredients, and the company has a clear stance on the debate.

"Not liking cilantro is something you should try keeping to yourself," Chipotle tweeted in July. And back in 2019 the chain tweeted, "A moment of silence for the people who think cilantro tastes like soap."

Cilantro tastes like soap to roughly 4 to 14% of the general population, thanks to genetics.

In other holiday Chipotle news, the company also recently launched clothing dyed with upcycled avocado pits from its restaurants, which produce over 300 million avocado pits a year. A crewneck sweatshirt costs $47 while a $14 onesie can outfit the chain's smallest fans.

The company has also made changes to its menu this year. It's testing pollo asado in Cincinnati, Ohio, and Sacramento, California, the first time it has experimented with its chicken in nearly 30 years. Chipotle also added smoked brisket to US menus, but that item is so popular it's leaving restaurants earlier than planned.