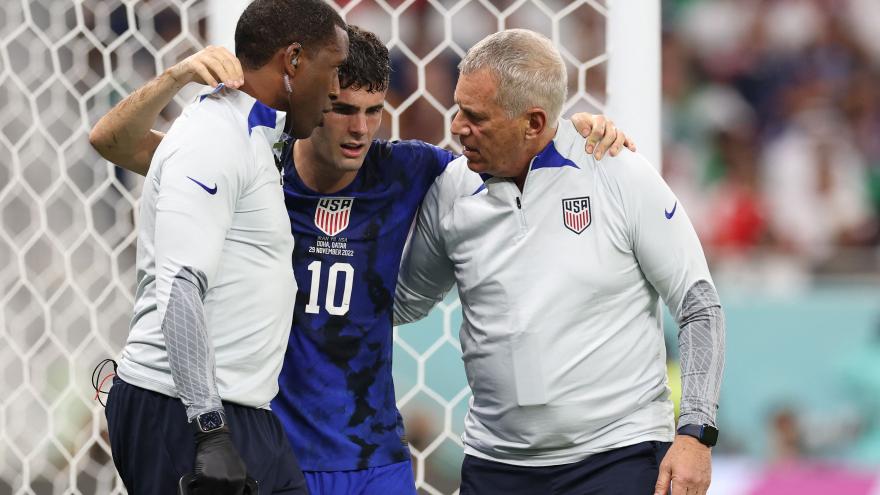 (CNN) -- US Men's National Team (USMNT) forward Christian Pulisic was taken to hospital due to an abdominal injury he suffered while scoring the game-winning goal for the United States in its crucial 1-0 win over Iran at the 2022 FIFA World Cup in Qatar.

A US Soccer spokesperson told CNN in an email that Pulisic, who collided with the Iranian goalkeeper after scoring his goal, went for medical scans but "was not hospitalized."

In a social media post the team said Pulisic was diagnosed with a pelvic contusion. His playing status is day-to-day.

Pulisic met the rest of the squad as they returned to the team hotel. In a video posted by USMNT officials on Twitter, the 24-year-old can be seen with a huge smile and using a cell phone to record his teammates walking through a cheering throng in the lobby.

World Cup host broadcaster FOX Sports tweeted a picture of Pulisic in what looks to be a hospital bed with the caption "So f**king proud of my guys I'll be ready Saturday don't worry." The US Men's National Soccer Team's Twitter account retweeted the Fox Sports tweet.

Pulisic didn't discuss his status when he posted on his verified Instagram, writing: "No words to explain what this means to us ! Let's go @usmnt"

The US Men's National Team earned a tough 1-0 win over Iran in a nerve-wracking Group B decider at Qatar 2022, securing its place in the knockout stage.

Pulisic's first-half goal was all that separated the two sides as the USMNT reached the round of 16 for the first time since 2014 -- but glee turned to concern after it became clear the star was injured while scoring the winner, leading the Chelsea man to be helped off the pitch by medics.

Pulisic soon re-entered the pitch, but was clearly still struggling with the knock. Despite only playing one half, Pulisic earned man of the match honors.

The USMNT will be hoping its star man, dubbed "Captain America" by some, is fit for the round of 16 tie Saturday. As Group B runners-up, the United States will face Group A winners Netherlands, ranked No. 8 in the world.