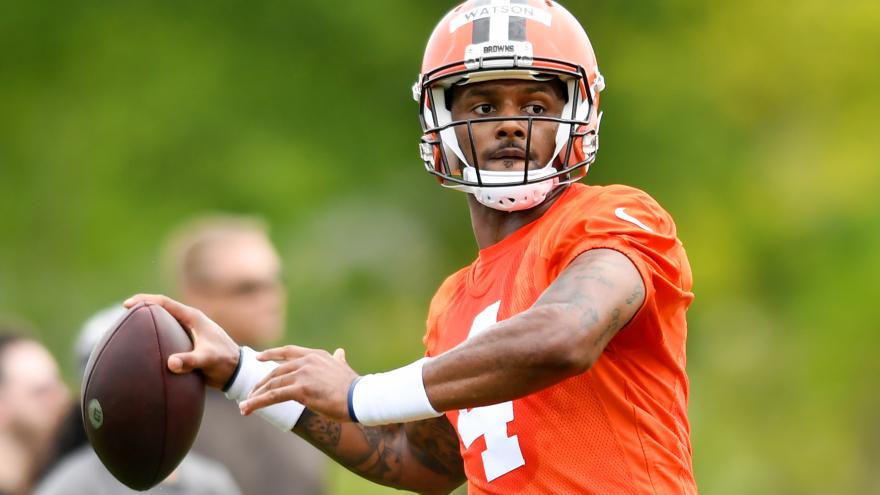 (CNN) -- Cleveland Browns quarterback Deshaun Watson has been suspended for six games for violating the National Football League's (NFL) personal conduct policy amid sexual misconduct allegations against him, according to ESPN citing an unnamed source.

CNN has reached out to the NFL, NFLPA and the Browns for comment.

Robinson heard Watson's case in late June and was jointly appointed by both the NFL and the National Football League Players Association (NFLPA), per their collective bargaining agreement (CBA).

Either party can now appeal to NFL Commissioner Roger Goodell in writing within three business days, according to the CBA. Goodell or his designee "will issue a written decision that will constitute full, final and complete disposition of the dispute and will be binding upon the player," per the CBA.

On Sunday night, the NFLPA and Watson released a joint statement, saying they will not appeal, regardless of the decision, and they ask the NFL to do the same.

Watson did not play last season while a member of the Houston Texans because of investigations into the allegations of misconduct including sexual assault and harassment involving more than two dozen women.

Watson, who was traded to the Browns in March, has repeatedly denied the allegations against him.

In June, Watson settled 20 of the 24 lawsuits brought by women accusing him of misconduct, according to an attorney for 24 accusers.

In July, 30 women who "have made, or intended to make, claims" against the Houston Texans organization over the sexual misconduct allegations against Watson, have settled their claims, according to a release from the claimants' attorney Tony Buzbee and a statement issued by the Houston Texans' ownership.