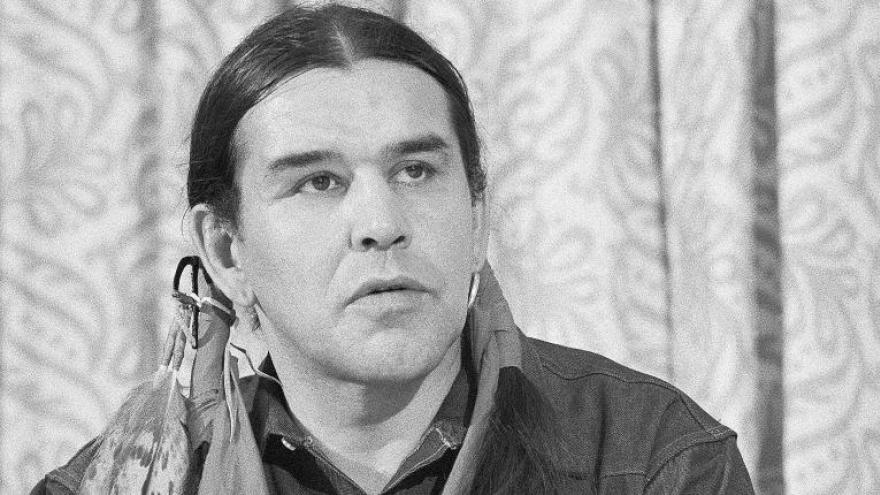 Bellecourt co-founded AIM in 1968 to help advocate for tribal sovereignty and better housing and opportunities for Native Americans in Minnesota and across the US.

He was the group's last living original founder.

"It (AIM) created an awakening on a national level of our people," his niece and current AIM's Executive Leader Lisa Bellinger told CNN affiliate WCCO. "It was never just a job for him. It was a way of life."

Some of the group's early work involved protecting Indigenous people against police brutality. By patrolling neighborhoods and taking down badge numbers, the group tried to hold police accountable and prevent Indigenous people from having their rights violated. Bellecourt eventually became the co-chair of the Minneapolis Police Community Relations Council.

"Clyde Bellecourt sparked a movement in Minneapolis that spread worldwide. His fight for justice and fairness leaves behind a powerful legacy that will continue to inspire people across our state and nation for generations to come," Minnesota Gov. Tim Walz posted on Twitter.

"Today, we lost a civil rights leader who fought for more than a half-century on behalf of Indigenous people in Minnesota and around the world. Indian Country benefited from Clyde Bellecourt's activism -- he cleared a path for so many of us. Journey well, Neegawnwaywidung," Minnesota Lt. Gov Peggy Flannigan tweeted.

Bellecourt inspired other Native American activists like Winona LaDuke, who is the executive director of Honor the Earth.

"Clyde Bellecourt worked most of his life upholding the rights and dignity of Indigenous people in North America. But his charisma and influence were felt worldwide," she told CNN in a statement. "Like his beloved fellow founders of the American Indian Movement (AIM) he was a powerful inspiration to a generation of activists and supporters, and his legacy will continue for the next seven generations and beyond."

AIM began in 1968 when Native American community activists in Minneapolis called a meeting out of frustration over decades of federal Indian policy and systemic discrimination. About 200 people showed up, according to the Gale Family Library in Minnesota. Bellecourt, along with George Mitchell and Dennis Banks, would go on to lead a movement born out of "ferment and determination."

Although the Minnesota group started out as a local movement that tackled poverty, poor housing and treaty rights, they later grew to a national movement.

In 1972, AIM joined the Trail of Broken Treaties. The walk began on the West Coast and ended in Washington, DC. AIM and other groups were demanding that the government fulfill its treaty commitments, according to the Minnesota Historical Society's MNopedia. AIM members eventually took over the Bureau of Indian Affairs building.

"After nearly a week, the Nixon administration agreed to consider their demands and pay for them to return home. The action made AIM a target of COINTELPRO, the FBI's covert operation meant to disrupt domestic political organizations," according to MNopedia.

AIM's leaders drew the attention of the FBI and the CIA for tactics that were considered militant by some. In 1973, the group took over Wounded Knee on the Pine Ridge Reservation in South Dakota to protest the US and tribal governments. The 71-day occupation had periods of violence and two people died in a shootout.

Bellecourt was one of the first to advocate against the use of racist names in the sports world and helped create the National Coalition on Racism in Sports and the Media in 1991.

He called for the former Washington Redskins to change their name and in 1992 he was a part of the group that protested the Super Bowl headlining the Washington team and the Buffalo Bills. The team finally changed its name to the Washington Football Team in 2020 after years of advocacy on the part of many.

Bellecourt also helped organize marches in Minneapolis during the 1991 World Series, when the Minnesota Twins faced the Atlanta Braves, and the 1992 Super Bowl when the Redskins played the Buffalo Bills, the Star Tribune reported.