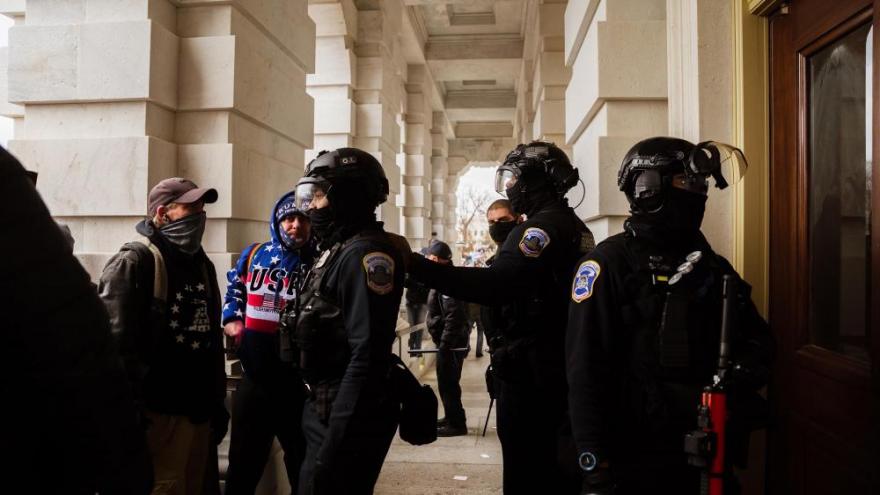 Capitol Police in riot gear face off against a group of pro-Trump protesters after removing them from the Capitol Building on January 6.

(CNN) -- In a rare moment of bipartisanship, the House and Senate have passed by unanimous consent a bill that would give the chief of the US Capitol Police unilateral control to ask for support from the National Guard or federal law enforcement in the event of an emergency.

The bill will now go to President Joe Biden to be signed into law.

As it stands, the chief must get the consent of the Capitol Police Board to ask for this type of back up. Both Republicans and Democrats have felt that layer of bureaucracy was at least part of what led to a delayed response from federal forces supporting Capitol Police on January 6.

"January 6th showed us that every minute counts during an emergency," said Democratic Sen. Amy Klobuchar of Minnesota in a statement after the legislation cleared the Senate. "This legislation will help ensure the Capitol Police Chief has the authority needed to call for reinforcements at the Capitol swiftly during emergencies."

Sen. Roy Blunt similarly touted the legislation as way to address "unnecessary delays" when "swift, decisive action" is needed. "This bipartisan bill addresses a major security challenge that was evident on January 6th, and is part of our ongoing effort to strengthen Capitol security moving forward," the Missouri Republican said in a statement.

While Capitol Police have described a list of significant changes to their operations, including wider intelligence sharing efforts, more trainings, and better coordination for events, department Inspector General Michael Bolton told the Senate Rules and Administration Committee earlier this month that only a fraction of the recommended changes to department following the January 6 riot have been implemented.

"The Department still lacks the overall training infrastructure to meet the needs of the Department, the level of Intelligence gathering and expertise needed, and an overall cultural change needed to move the department into a protective agency as opposed to a traditional Police Department," Bolton told lawmakers in written testimony.

In a statement, the Capitol Police previously said it "agrees with the Inspector General that the Department must continue to improve and expand its intelligence and protective capabilities. This is vital for carrying out our critical mission."

"Training is a top priority. We are working diligently to address staffing shortages in order to provide officers more time for additional training," the statement added.

This story has been updated with additional information Tuesday.