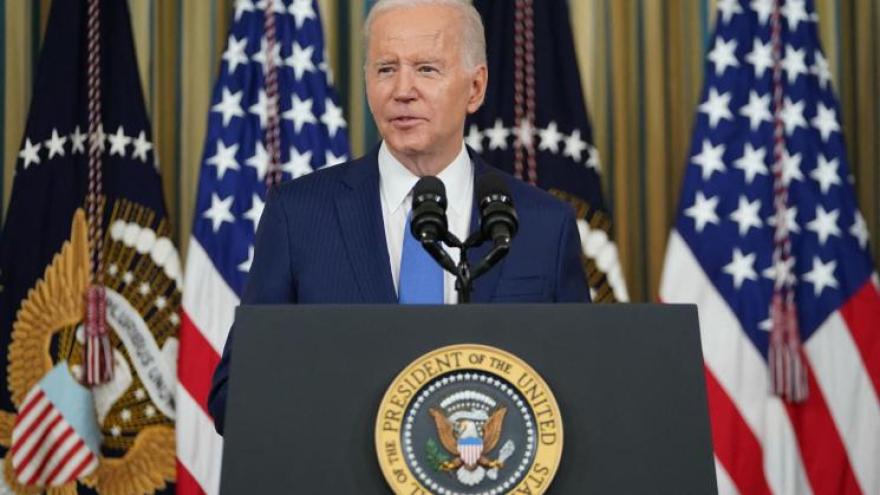 President Joe Biden, seen here on November 9, in a statement on November 28 called on Congress to pass legislation "immediately" averting a rail shutdown.

(CNN) -- Democratic leaders say they could act as soon as this week after President Joe Biden on Monday called on Congress to pass legislation "immediately" to avert a rail shutdown by officially adopting a September tentative agreement approved by labor and management leaders.

"I am calling on Congress to pass legislation immediately to adopt the Tentative Agreement between railroad workers and operators -- without any modifications or delay -- to avert a potentially crippling national rail shutdown," Biden said in a statement.

"This agreement was approved by labor and management negotiators in September," Biden continued. "On the day that it was announced, labor leaders, business leaders, and elected officials all hailed it as a fair resolution of the dispute between the hard-working men and women of the rail freight unions and the companies in that industry. ... Since that time, the majority of the unions in the industry have voted to approve the deal."

A rail strike could become a reality as early as December 9, causing shortages, spiking prices and halting factory production. It could also disrupt commuter rail services for up to seven million travelers a day and the transportation of 6,300 carloads of food and farm products a day, among other items, according to a collection of business groups.

Additionally, a freight rail strike could cost the US economy $1 billion in its first week alone, according to a new analysis from the Anderson Economic Group.

While the railroads say they are hopeful of reaching new deals, they have so far rejected the demands that union negotiators say their members want. A previous strike threat in September risked causing greater problems with goods slated for holiday sales, but that strike threat was averted by an 11th-hour tentative labor deal.

House Speaker Nancy Pelosi, a Democrat from California, said Monday the House will take up this week legislation to avert a possible rail strike.

"This week, the House will consider legislation adopting the Tentative Agreement reached in September after months of hard-fought negotiations," Pelosi said in a statement.

The Senate is expected to have the votes to break a filibuster on the bill to avert a potential railway strike, according to those sources. There are likely to be at least 10 Republicans who will vote with most Senate Democrats to overcome a 60-vote threshold.

The only question is how quickly the bill can come to the floor since any senator can object, dragging out the process and delaying a quick vote. Sources are watching Vermont Sen. Bernie Sanders closely to see if he upends an effort to get a quick vote. A Sanders spokesman declined to comment.

Congress can impose a contract on both parties or extend a negotiation "cooling-off period" to keep the railroads running and avert disruptions to interstate commerce under the Railway Labor Act of 1926. The main crux of the dispute between the railroads and their workers revolves around time off rules.

Calling himself a "proud pro-labor President," Biden said in his Monday statement, "I am reluctant to override the ratification procedures and the views of those who voted against the agreement. But in this case -- where the economic impact of a shutdown would hurt millions of other working people and families -- I believe Congress must use its powers to adopt this deal."

A rail shutdown, Biden warned, would "devastate the economy."

Ian Jefferies, the president and CEO of the Association of American Railroads, said in a statement Monday evening, "No one benefits from a rail work stoppage -- not our customers, not rail employees and not the American economy."

"Now is the appropriate time for Congress to pass legislation to implement the agreements already ratified by eight of the twelve unions. A clear pattern of ratified agreements has been established and Congressional action to prevent a work stoppage in this manner is appropriate," Jefferies said.

"These agreements will ultimately boost average employee compensation and benefits to more than $160,000."

Earlier Monday, White House press secretary Karine Jean-Pierre said Biden has been "directly involved" in efforts to resolve the ongoing rail union dispute which could lead to a rail shutdown -- in contrast with comments from Biden himself, who told reporters in Nantucket over the weekend he has "not directly engaged" with railway and labor negotiators.

This story has been updated with additional information Monday.