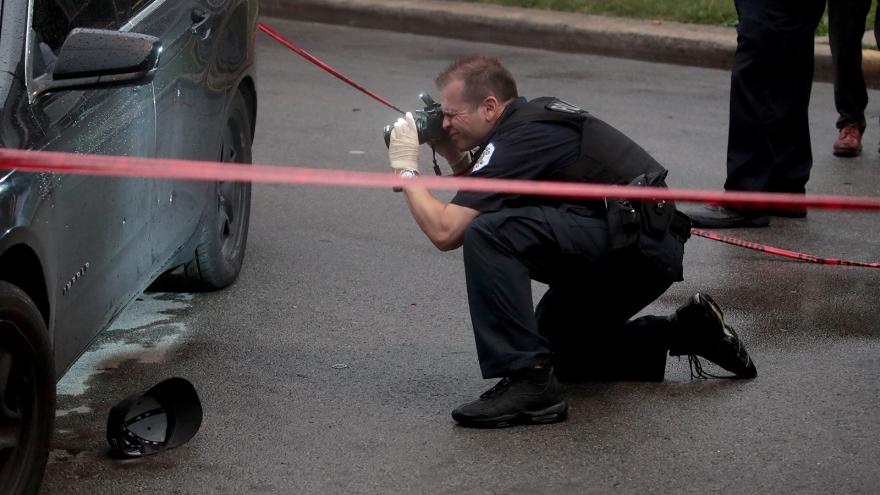 (CNN) -- Stay-at-home policies put into effect to help control the spread of Covid-19 were linked with a 37% average reduction in crime in 27 cities across 23 countries, an international team of researchers reported Wednesday.

Robberies and thefts fell the most -- by 46% -- perhaps as people stayed at home instead of going to work. Homicides fell 14%, the researchers reported in the journal Nature Human Behaviour.

"Our findings show that the stay-at-home policies were associated with a substantial drop in urban crime," Amy Nivette, of the University of Utrecht in the Netherlands, and colleagues around the world wrote.

"On average, the overall reduction in crime levels across all included cities was around 37%."

There were many differences among cities, the researchers found. "The cities represent a large variation of measures relating to stay-at-home restrictions. They range from mostly voluntary recommendations to avoid public space (for example, Malmö and Stockholm in Sweden) to a complete halt of all but the most essential activities, based on emergency legislation and enforced by substantial penalties for breaching the rules (for example, Lima in Peru)," they wrote.

"As most people stayed at home throughout the day, fewer houses were left unsupervised and residential burglary may have become much more difficult, while commercial buildings likely became less supervised and hence an easier target," they added. Also, fewer bar fights were reported, but the potential for domestic violence rose.

"The smaller decrease in homicide cases may be due to a number of factors. First, in many societies, a substantial proportion of homicides are committed in domestic contexts and are hence not affected by the reduction in the density of daily encounters in cities. Second, a varying proportion of homicide is associated with organized crime, conflicts between gangs or conflicts related to drug trafficking," the team wrote.

A lot varied from city to city, as might be expected. Burglaries fell by 84% in Lima and rose by 38% in San Francisco, the researchers found. Police in many US cities have reported significant increases in violent crime with the pandemic.

But US cities did not see lockdowns similar to those imposed across Europe, parts of South America including Peru, and Asia. And in the US, millions of people joined protests against racial injustice and police brutality that were sometimes marred by crime. The two US cities included in Wednesday's study were San Francisco and Chicago.

The strictness of lockdown laws did not seem to directly correlate with changes in crime, the researchers found.

"The results show that more severe restrictions on school opening, working from home, public events, private gatherings and internal movement are not significantly related to the size of effects, with one exception: More stringent reductions or closures of public transportation are associated with more negative effect sizes for robbery and vehicle theft only," they wrote.