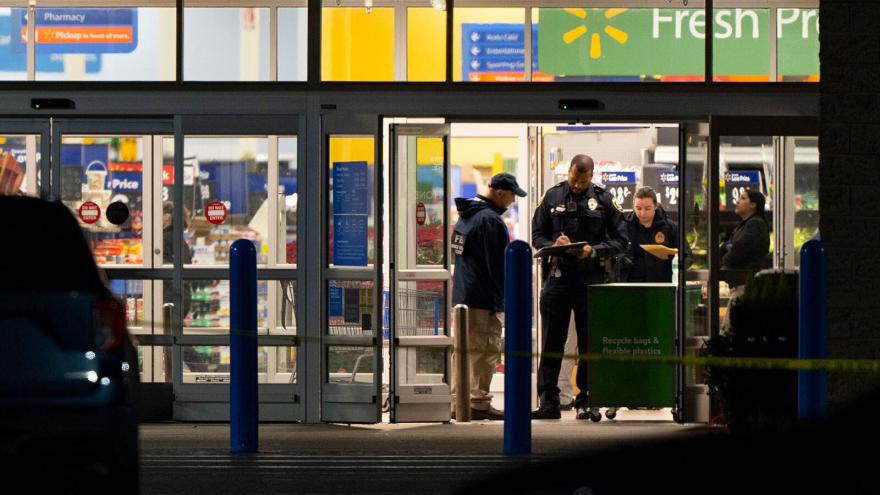 Law enforcement, including the FBI, work at the scene of a mass shooting at a Walmart, on November 23 in Chesapeake, Virginia. Several coworkers of the Walmart supervisor suspected of committing the deadly rampage said the shooter had exhibited odd behavior in the past.

(CNN) -- Several coworkers of the Walmart supervisor suspected of committing the deadly rampage inside a Chesapeake, Virginia, store said the shooter had exhibited odd and threatening behavior in the past.

Andre Bing, the suspected gunman who worked as a night shift team leader, could be gruff with fellow employees and expressed paranoid views about the government, according to interviews with coworkers.

"He said a lot of disturbing things," said Donya Prioleau, who said she was in the employee break room when Bing entered and opened fire unexpectedly.

"We don't know what made him do this," she said. "None of us can understand why it happened."

She said Bing "came in, shot three of my friends ... before I took off running. Half of us didn't believe it was real until some of us saw all the blood on the floor."

In the past, Prioleau said, Bing could be "condescending when he spoke to us. He didn't have good communication skills. He was quite mean to a lot of us."

Shaundrayia Reese, who worked with Bing from 2015 to 2018, described him as a loner.

"He was always saying the government was watching him. He didn't like social media and he kept black tape on his phone camera. Everyone always thought something was wrong with him," Reese said.

A video Reese says she took in 2016 shows a man she identifies as Bing talking to people before realizing he's being filmed and walking away.

"He didn't like to be recorded," Reese said. "He was always scared that the government was listening."

Joshua Johnson, who worked as a maintenance worker at the store until 2019, also told CNN that Bing had previously issued ominous threats if he ever lost his job.

"He said if he ever got fired from his job he would retaliate and people would remember who he was," Johnson said.

Neither Johnson nor Reese reported any concerns about Bing to management, they said.

According to Johnson, Bing had problems with some of the maintenance workers and would threaten to write them up if they didn't follow his orders.

Chesapeake Police Chief Mark Solesky said there is no clear motive for the shooting known at this time.

Walmart confirmed Bing was an employee and said in a statement the company was "thankful for the local first responders and will continue to work with local law enforcement as they continue their investigation."