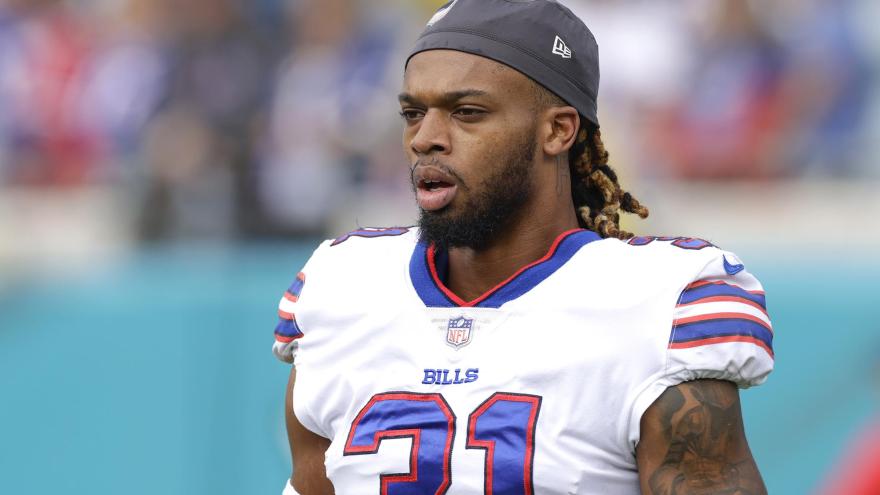 (CNN) -- Buffalo Bills safety Damar Hamlin returned to the team's stadium for a playoff game in Orchard Park, New York, on Sunday, three weeks after his on-field collapse and near death.

Hamlin, 24, was driven in a cart to the locker for Sunday's game against the Cincinnati Bengals at 3 p.m. ET. He was wearing sunglasses and a jacket, sold through his Chasing M's clothing line, with the hood pulled up. CBS also showed the arrival at the stadium of two people the broadcast reported to be Hamlin's mother Nina and his younger brother.

With two minutes left in the first half, the stadium announcer said Hamlin was in the building and showed him on the big screen, according to CBS. In the video, Hamlin stood up, put his hands together in a heart gesture and then held up three fingers on each hand for his jersey number. He also raised his arms and motioned for the crowd to get up and get loud.

But it was the Bengals who prevailed in the game, beating Buffalo 27-10 despite Buffalo's homefield advantage and the emotional lift of having Hamlin in the stadium.

It was Hamlin's first public appearance since he collapsed after making a tackle in the first quarter of the Bills-Bengals game on January 2. Doctors and trainers gave Hamlin CPR on the field and he was rushed out of the stadium in an ambulance, leaving players, coaches, fans and those watching on TV in shock and unsure whether he was alive.

Since then, Hamlin has made remarkable progress, and he was discharged from a Buffalo medical center on January 11.

"It's limited, just overall, but he comes in and -- it really just started really today or yesterday -- just trying to get back to a little bit of a routine, just getting himself acclimated again, taking it one baby step at a time," McDermott said.

"Damar still requires oxygen and is having his heart monitored regularly. He has visited with the team a few times but he still gets winded very easily," Rooney said. "He's upbeat and positive and ready to continue to overcome this."