Damar Hamlin is awake and holding hands with family, his agent tells CNN, days after his cardiac arrest during NFL game 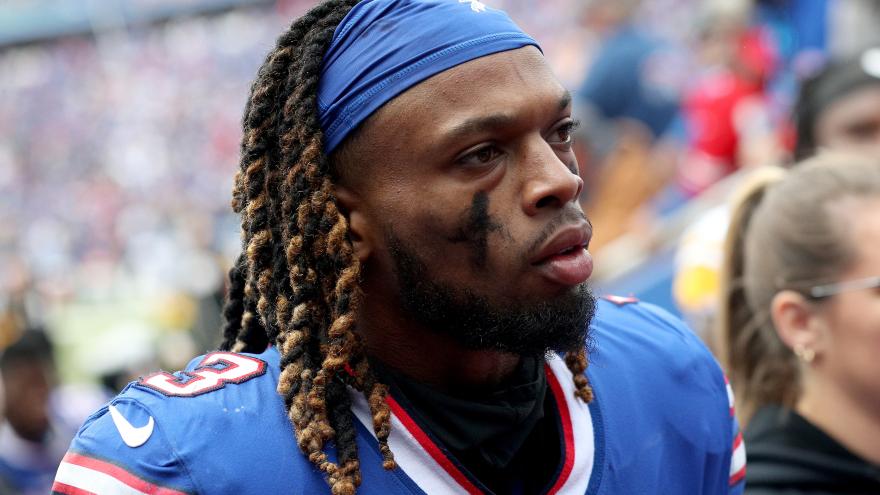 (CNN) -- Buffalo Bills player Damar Hamlin is awake in a Cincinnati hospital, his agent and a teammate said Thursday morning, eliciting immediate relief and joy from supporters across the nation three days after the 24-year-old's in-game cardiac arrest.

Hamlin, who had been sedated during his hospitalization, is awake and has been holding hands with family in the hospital, his agent Ron Butler told CNN.

Hamlin has shown "substantial improvement" in the last 24 hours, and "it appears that his neurological condition and function is intact," Dr. Timothy Pritts, vice chair for clinical operations at UC Health, said Thursday afternoon in a news conference.

Still, Hamlin is critically ill and is being cared for the University of Cincinnati Medical Center's intensive care unit, Pritts said.

"He still has significant progress that he needs to make, but this marks a really good turning point in his ongoing care," Pritts said.

The news drew tweets of celebration from players around the NFL and beyond, including from President Joe Biden, who posted on Twitter: "Great news. Damar, like I told your mom and dad yesterday, Jill and I -- along with all of America -- are praying for you and your family."

Further details about Hamlin's condition and how he demonstrated he was neurologically intact were not immediately released by the team, as supporters across the country hang on updates of his condition and NFL players contemplate an emotional return to the field this weekend. The hospital has declined to comment.

Hamlin collapsed in the first quarter of Monday night's Bills game against the host Cincinnati Bengals, stunning the packed stadium and leading to the contest's postponement -- a rare move in a league where inherently violent play usually resumes after on-field injuries. No decision has been made on whether to resume that contest -- halted with the Bengals leading 7-3 -- NFL spokesperson Brian McCarthy told CNN on Thursday, even as all 32 teams prepare for their final scheduled regular-season games this Saturday and Sunday.

Before news spread Thursday that Hamlin was alert, some in the league had been openly assessing their readiness to play this weekend. It is still unclear what caused Hamlin's cardiac arrest, and the NFL will investigate what could have led to it, its Chief Medical Officer Dr. Allen Sills said Wednesday.

Bengals quarterback Joe Burrow "probably wants to play" Sunday's Bengals-Ravens game, but there may be others who don't, he told reporters Wednesday.

"I'm sure if you polled the locker room, there'd be mixed votes on that," Burrow said. "Personally, I think playing is going to be tough ... I think getting back to as normal as you can as fast as you can is personally how I kind of deal with these kinds of things. But ... everyone has a different way of dealing with it."

The Bills, scheduled to host the Patriots on Sunday, returned to work Wednesday with meetings and are set to hold their first practice of the week Thursday. Players -- already reeling from last year's racist mass shooting and the recent deadly blizzard in their hometown -- felt encouraged and emotional when Hamlin's father, Mario Hamlin, did a Zoom call with the team Wednesday and said his son was making progress, a source in the Bills organization told CNN on Thursday.

The Bills on Thursday afternoon plan to hold their first news conference since Hamlin was injured, a source tells CNN's Coy Wire.

Some of this weekend's games -- and perhaps the postponed Bills-Bengals game, if it is ever made up -- will have implications for the approaching NFL playoffs. The Bills (12-3) and Bengals (11-4) in particular have already clinched playoff spots but are jockeying for higher seeds in the American Football Conference.

Since his hospitalization, Hamlin has gotten a nationwide outpouring of support from fans and players across pro sports, including more than $7 million donated to his foundation's toy drive GoFundMe as of Thursday morning. Several athletes have donned Hamlin's No. 3 or his jersey while teams have honored him through Jumbotron messages and light displays at their stadiums.

Boyhood friend and NFLer: 'I got him. We all got him'

Hamlin collapsed shortly after a collision in which a Bengals receiver tried to power past Hamlin, who'd approached for a tackle, with about six minutes remaining in the first quarter of Monday's game. Hamlin still twisted the receiver to the ground and stood up -- but within seconds fell and lay motionless.

His heartbeat was restored on the field, the Bills have said, before he was ferried from the stadium in an ambulance while stunned and visibly emotional players and fans looked on.

Hamlin not only was sedated but was on a ventilator and also was "flipped over on his stomach" in the hospital to help relieve some of the strain on his lungs, which were damaged, his uncle Dorrian Glenn told CNN on Tuesday. Details about what ailed Hamlin's lungs weren't available.

Among those who rushed to the Cincinnati hospital after the game was Indianapolis Colts safety Rodney Thomas II, one of Hamlin's childhood friends. Thomas visited while Hamlin was sedated and intubated this week, he said.

There is "no doubt in my mind" Hamlin will recover, Thomas told reporters Wednesday.

"I know he could hear me," Thomas said, adding he held Hamlin's hand. "Even if he couldn't hear me, it didn't matter. I said what I had to say."

"Just basically (I said) that I love him, and I've got his back, and I'll see him in a little bit," Thomas added Thursday to "CNN This Morning" before news circulated that Hamlin was awake.

Hamlin and Thomas, who became close friends as high school teammates in Pittsburgh, spoke daily and had talked Monday before Hamlin's collapse. Seeing his friend soon after the in-game incident "calmed me way down," Thomas said Wednesday. "It made the trip home a lot easier. I could go home and know he's gonna be straight. I got him. We all got him. Everybody's behind him."

Looking ahead to the weekend games, Thomas, whose Colts host the Texans on Sunday, said each team needs to "trust that everybody would just make the best decision moving forward, whether that's playing, whether that's not playing."

"Player-wise ... just the world in general, we're all just one heartbeat right now ... all waiting for Damar just to get healthy," Thomas told CNN Thursday.

Sills, the NFL's chief medical officer, on Wednesday addressed theories that Hamlin's cardiac arrest could have been caused by commotio cordis, which occurs when severe trauma to the chest disrupts the heart's electrical charge, causing dangerous fibrillations.

"You have to have the right type of blow hitting at the right spot on the chest with the right amount of force at just the right time in that cardiac cycle," he said in Wednesday's call with reporters. "So, a lot of things have to line up for that to happen," he said, emphasizing that while it is possible, investigators will consider all options.

Any time a player is evacuated from the field, the NFL and its medical experts perform a detailed review of what happened, Sills said. They also examine the role protective equipment may have played, he said.

In some cases, the medical team will not be able to determine what caused the problem, Sills said.

Sills attributed the "transformational response" of medical personnel when Hamlin collapsed to a "60-minute meeting" that is held among medical teams and NFL officials before every game. During the meeting, teams identify the location of medical equipment and nearby medical centers, and establish a chain of command in case of an emergency, including cardiac arrest, among other things.

Shock has weighed heavily on the Bills

Hamlin's collapse is the latest in a string of recent tragedies to have struck the community of Buffalo and its beloved football team, including a racist mass shooting and a historic blizzard that left at least 41 people dead in Erie County, New York.

A high-ranking official within the Bills organization told CNN's Coy Wire that they broke down in tears after day and night-long meetings on Tuesday, sobbing because of the heaviness of the situation.

The series of difficult blows to Buffalo have emotionally piled up within the organization, the source said, adding that through it all, the team has tried to be a source of strength for the city.

The performance of Buffalo Sabres hockey forward Tage Thompson on Tuesday night was a "glimmer of hope" at a time when the team needs inspiration, the source said.

Hamlin's jersey No. 3, was a recurring motif throughout the game, played on January 3. Thompson's three goals during overtime brought the Sabres a win. It was Thompson's third hat trick of the season and his third goal came fortuitously in the third minute of overtime.

The Sabres also wore "Love for 3" T-shirts honoring Hamlin before the game.