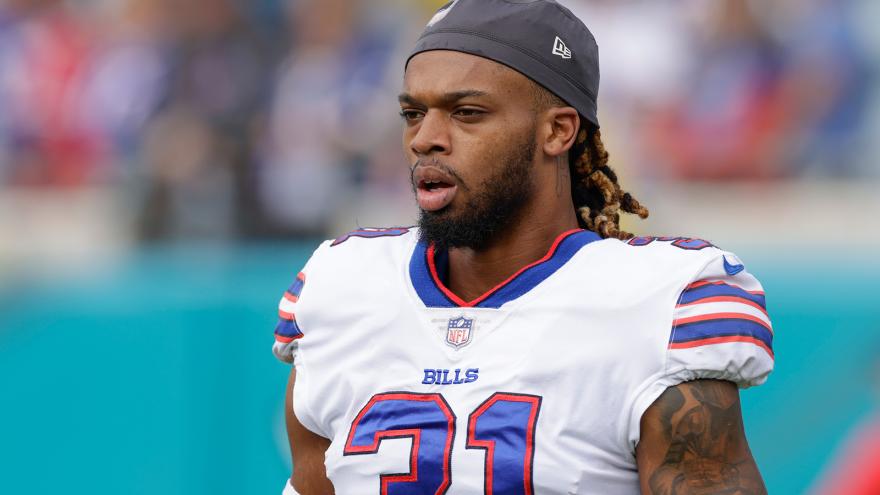 "His neurologic function remains intact and he has been able to talk to his family and care team," it tweeted, citing physicians at the Cincinnati hospital where he's being treated.

Buffalo Bills safety Damar Hamlin has made "substantial improvement" in a Cincinnati hospital following his in-game cardiac arrest on Monday, doctors announced Thursday, and is now awake and moving his hands and feet.

The 24-year-old can communicate by shaking his head, nodding or writing brief notes but can't yet speak because he's on a ventilator, Dr. Timothy Pritts, part of his medical team, told reporters. Upon awakening, Pritts said, Hamlin's mind was still on the game as he scribbled his first question on a clipboard: "Did we win?"

"So, we know that it's not only that the lights are on, we know that he's home. And that it appears all cylinders are firing within his brain," said Pritts, who is vice chair for clinical operations at University of Cincinnati Health where Hamlin is being treated.

Yet the medical team cautioned that many phases of Hamlin's recovery lie ahead. The player, who had to be sedated and intubated following his collapse, still is critically ill, Pritts said. Physicians did not say precisely when he started waking up.

Hamlin collapsed Monday during the first quarter of the Bills' game against the host Cincinnati Bengals. He was rushed from the field in an ambulance, stunning a packed stadium -- with players left crying and embracing -- and prompting on outpouring of support from strangers across the nation, including from among millions who watched the medical emergency play out on live TV.

The NFL announced Thursday the Bills-Bengals game -- which was initially postponed Monday night -- will not be resumed or made up. The league's players, many shaken by Hamlin's collapse, now are preparing for an emotional return to competition to play their final games of the regular season Saturday and Sunday.

That includes on Sunday the Bills hosting the New England Patriots and the Bengals hosting the Baltimore Ravens. The league is working on plans to honor Hamlin at all 16 of this weekend's contests, two people familiar with the matter told CNN's Oliver Darcy.

Both the Bills and the Bengals already have clinched playoff berths. While nullifying Monday's game will have no effect on which teams qualify for the playoffs, it could alter seeding and which teams host certain games -- and the NFL on Friday is expected to finalize adjustments to address that.

"This has been a very difficult week," NFL Commissioner Roger Goodell said Thursday. "We continue to focus on the recovery of Damar Hamlin and are encouraged by the improvements in his condition as well as the tremendous outpouring of support and care for Damar and his family from across the country. We are also incredibly appreciative of the amazing work of the medical personnel and commend each and every one of them."

Here are the latest developments:

• Hamlin has made "a fairly remarkable recovery": Though Hamlin remains in intensive care, he is demonstrating "good neurologic recovery" and is awake and holding hands with family in the hospital, Pritts said Thursday.

• He has a long way to go: "This marks a really good turning point in his ongoing care," Pritts said, but "there are many, many steps still ahead of him." Hamlin's next big milestone will be breathing on his own without a ventilator, said Dr. William Knight, director of emergency medicine.

• Cardiac arrest cause still unknown: Tests are underway to determine the cause of his cardiac arrest, Knight said. Cardiac arrest results from electrical disturbances that cause the heart to suddenly stop beating properly, and death can occur quickly if help isn't rendered immediately; it is not the same as a heart attack or heart failure.

•Hamlin lost pulse on the field: While surrounded by medical teams on the field, Hamlin lost his pulse and had to be administered CPR and defibrillation as fans and teammates looked on, Knight said. He was then intubated in the ambulance and arrived at the hospital about 30 to 45 minutes after he collapsed, the doctor added.

•Bills are back to work: The team met Wednesday and held its first full practice of the week Thursday in preparation for hosting the Patriots on Sunday. The team has been receiving "incremental updates" from medical staff as well as from Bills general manager Brandon Beane and head athletic trainer Nate Breske who stayed behind in Cincinnati, head coach Sean McDermott said. "I think the fact that we just keep hearing good news about Damar, it just keeps pushing us forward," quarterback Josh Allen told reporters Thursday.

• "People are going to be changed forever": The players have had "some very open and honest and deep talks" since their teammate was hospitalized Monday, Allen said. "I think putting that helmet back on was a really good thing for our team," he said of returning to practice, "... but I would be lying to you if I didn't say, some people are going to be changed forever after being on the field and witnessing that and feeling those emotions."

News of Hamlin's waking up was met with a rush of messages of support and relief from players across the NFL. Since his collapse, supporters have honored the player, donating more than $7 million to his charity fundraiser and making his jersey the most purchased athletes' jersey at the sports apparel store Fanatics, a company spokesperson said.

Hamlin's family and Allen also have dismissed online criticisms of Cincinnati Bengals receiver Tee Higgins, who collided with Hamlin just moments before his collapse. The family's spokesperson has said Higgins has reached out and "has been supportive."

"I hope that he got some relief today," Allen said of Higgins while speaking to reporters Thursday. "That's a football play, and I hope that he doesn't hold that upon himself, because there is nothing else that he could have done in that situation."

Doctors and Bills team members have repeatedly applauded the immediate action of medical personnel who rushed to Hamlin just seconds after his collapse.

"As they say, practice pays off and it did in this case," the coach said at Thursday's post-practice news conference devoted to Hamlin. "But again, the context of it, for an assistant to find himself at that position and needing to take the action that he did and step up and take charge like he did -- and there were others on the field as well -- is nothing short of amazing and (the) courage that took, you talk about a real leader, a real hero, in saving Damar's life."

Medical personnel working on the sidelines when Hamlin collapsed called for everyone to assist, according to audio obtained by CNN. "I don't like how he went down," and "We're going to need everybody," they said.

NFL chief medical officer Dr. Allen Sills on Wednesday attributed the rapid medical response to a "60-minute meeting" that is held among medical teams and NFL officials before every game to identify the location of medical equipment and nearby medical centers, and establish a chain of command in case of an emergency, among other things.

In Thursday's announcement of the official cancellation of the Bills-Bengals game that was suspended after Hamlin's collapse, the NFL detailed parts of its decision-making, including that the outcome of the game would have no impact on teams qualifying for the playoffs.

The Bills and the Bengals have already clinched playoff spots but are jockeying for higher seeds in the American Football Conference postseason.

Deciding to resume or make up the game would also have forced the league to postpone the start of the playoffs by one week, the NFL release explained, a move that would have affected all 14 clubs that qualify.

Lastly, making the decision before Week 18 still allows all clubs to know the playoff possibilities before their final game of the regular season, the league said.