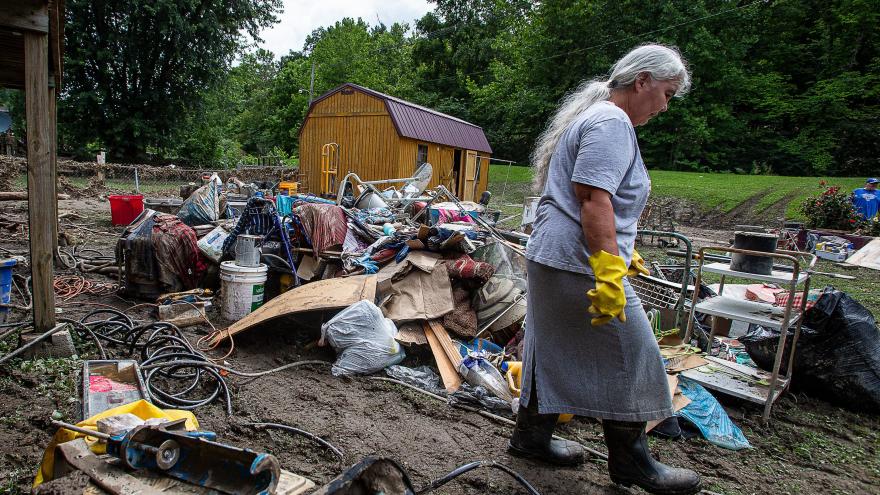 (CNN) -- At least 28 people have died in last week's flooding in Kentucky as rescuers continue to search for missing people and the region braces for yet more rain.

"Our confirmed count of Kentuckians we've lost has now reached 28, and we expect that there will be more, and that that number will grow," Gov. Andy Beshear said Sunday.

The devastating flooding Thursday was unprecedented, officials said, inundating houses and sweeping some from their foundations.

"This is one of the most devastating deadly floods that we have seen in our history," Beshear said on NBC's "Meet The Press" Sunday. "It wiped out areas where people didn't have that much to begin with."

"We're going to be finding bodies for weeks, many of them swept hundreds of yards, maybe a quarter-mile plus from where they were last," the governor said.

Now, more rainfall is in the forecast that threatens some areas hardest-hit by the deadly flooding.

"The forecast is concerning, and we're watching it very closely, obviously. We also are sending out warnings and making sure everyone knows," said Col. Jeremy Slinker, the Kentucky emergency management director.

"We're preparing for it and making sure all the residents there are prepared for it because we just don't want to lose anyone else or have any more tragedy," he told CNN's Pamela Brown Saturday.

A flood watch is in effect through at least Monday morning for parts of southern and eastern Kentucky, according to the National Weather Service, and there is a Level 3 of 4 moderate risk for excessive rainfall Sunday across southeastern Kentucky, per the Weather Prediction Center, escalating the concern of additional flooding.

"The threat of flash flooding will be gradually increasing as showers and thunderstorms with very heavy rainfall rates develop and expand in coverage today," the center said, deeming the atmospheric conditions in the area as "tropical in nature," meaning it is warm, moist and can support an incredible amount of water.

Widespread rainfall totals of 1 to 3 inches are forecast over the next 24 to 48 hours, but as much as 4 or 5 inches is possible in localized areas. As little as 1 to 2 inches can revive flooding concerns, particularly in areas already inundated with heavy rain where the soil is saturated.

Officials believe thousands have been affected, and efforts to rebuild some areas may take years, the governor told CNN Saturday. The state's estimated losses are potentially in the "tens if not the hundreds of millions of dollars."

In Perry County alone, approximately 50 bridges were washed away, County Judge Executive Scott Alexander said at a news conference Sunday morning, calling it "the biggest event that I'm aware of that Perry County has ever faced."

State officials Sunday were working to open Buckhorn State Park to house a number of those who lost their homes, the governor said at the news conference, adding he hoped to announce the state park could be used as a shelter soon.

"We recognize that the hotels and motels here are full, the shelters are full, that people are sleeping in their cars and trucks and we don't need that," Beshear said.

After the rain, excessive heat is expected to build over the region Tuesday as many people are currently struggling with no access to clean drinking water, power outages and cell service still out in some counties Sunday.

"We have multiple Kentucky State Police posts that are taking calls from loved ones that can't connect with those that they are worried about," the governor told NBC Sunday. "But it's going to take some time to get a firm grasp on that. We still can't get into some areas to check on people."

More than 13,000 homes and businesses in the region were in the dark early Sunday afternoon, according to PowerOutage.us; three drinking water systems were totally out of operation Saturday, the governor said, leaving residents without access to water, or only access to water which needed to be boiled before it could be safely consumed.

The federal government sent tractor trailers of bottled water to the region, and more financial assistance is on the way.

The flooding -- as with other recent weather disasters -- was further amplified by the climate crisis: As global temperatures climb as a result of human-caused fossil fuel emissions, the atmosphere is able to hold more water, making water vapor more abundantly available to fall as rain.

Scientists are increasingly confident in the role the climate crisis plays in extreme weather, and have warned such events will become more intense and more dangerous with every fraction of a degree of warming.

Officials have moved swiftly to approve financial assistance, given the scores of people in need of relief after losing everything.

"Residents will actually receive direct payments, which is some really good news in what will be a very long tunnel to see the light," Coleman said.

Coleman did not provide an exact date on when those payments are expected to reach residents, though she said they will be dispersed as soon as the state receives the money.

Nearly $700,000 has been raised for relief efforts, Beshear said Saturday, noting funeral expenses for those killed in the flooding will be paid for.

Additionally, the state is prioritizing placing generators at the shelters for flood survivors as temperatures are expected to soar Tuesday following the rain.

Among the tales of heroism emerging from the disaster is an unidentified man who drifted through fast-moving water to get a 98-year-old grandmother, her grandson and another family member out of their home as it was nearly swallowed by the flooding Thursday.

Randy Polly, who witnessed the rescue in Whitesburg, Kentucky, and recorded parts of it on his cellphone, told CNN he got stuck a distance away from the home on his way to get gas Thursday morning.

Polly said he heard people yelling across the flooded road, "Get me help, get help." He called 911, but first responders were overwhelmed and unresponsive to his calls.

Around 9 a.m., he saw a man he described as a hero drift over to the house and start banging on the door and window.

The man eventually helped get three people out of the home and guided them through rushing water, the videos show. The rescue took about 30 minutes, Polly said.

Missy Crovetti, who lives in Green Oaks, Illinois, told CNN the people rescued in the video are her grandmother Mae Amburgey, uncle Larry Amburgey and brother Gregory Amburgey. They are safe and doing well, she said.