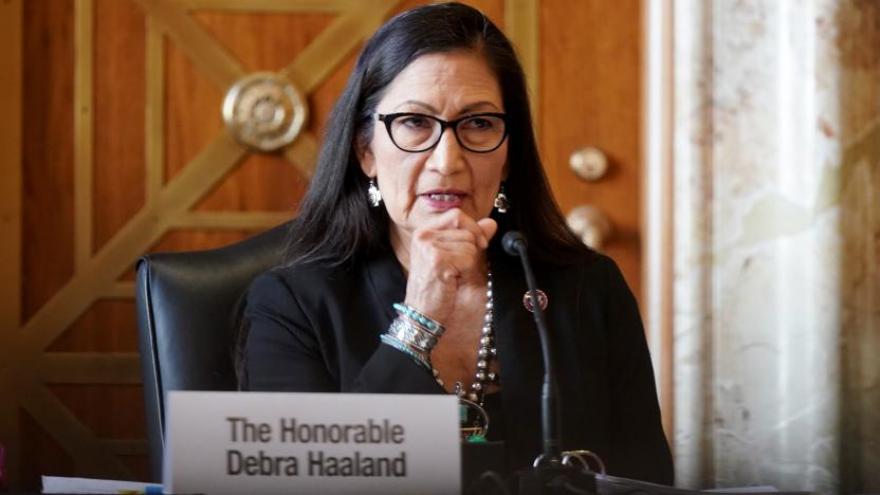 Interior Secretary Deb Haaland announced a new unit within Bureau of Indian Affairs that plans to tackle the decades-long crisis of missing and murdered Native Americans. Haaland said efforts to investigate missing or killed Indigenous people will be "all hands-on deck."

"Violence against Indigenous peoples is a crisis that has been underfunded for decades," Haaland said in a statement Thursday. "Far too often, murders and missing persons cases in Indian country go unsolved and unaddressed, leaving families and communities devastated."

Thousands of Indigenous women and girls have been killed or vanished for years. Their families and activists say the cases are often disregarded by law enforcement, which has forced them to bring the spotlight on the issue through social media campaigns, marches and protests.

The new unit is expected to "help put the full weight of the federal government" to investigate the cases and coordinate resources among federal agencies and Indian country, according to the Department of Interior.

About 1,500 American Indian and Alaska Native missing persons have been recorded across the United States by the National Crime Information Center, and 2,700 homicide cases have been reported to the federal government's Uniform Crime Reporting Program.

The Justice Department has reported that on some reservations, Native American women are murdered at a rate more than 10 times the national average.

But the existing data and statistics about the crisis of missing and murdered Indigenous people across the US is not comprehensive, advocates say.

Annita Lucchesi, a descendant of the Cheyenne tribe and executive director of the Sovereign Bodies Institute, has been tabulating missing and murdered cases for the past few years.

The Indigenous-led research organization has documented 2,306 missing Native American women and girls in the US since the 1900s -- and about 58% of those cases were homicides, the group said in a report last year.

Lucchesi said hopes the new initiative led by the Interior Department is "beneficial to the families, pushes cases towards justice and really holds law enforcement agencies accountable for their complicity in the issue."

Previous efforts to address the crisis have not been successful in the eyes of victims' families, Lucchessi said, because "law enforcement just don't investigate as they should and the justice system doesn't prosecute as they said."

During its first year, the task force met with tribal leaders and other stakeholders to develop strategies for strengthening investigations, raise public awareness, and improve data collection and information sharing. Last summer, the task force also established the first of seven teams across the country dedicated to reviewing cold cases, according to a report of the task force's progress.

The new unit will build on the task force's work and will designate new leadership and support positions, the department said in a statement.

"Whether it's a missing family member or a homicide investigation, these efforts will be all hands-on deck," Haaland said. "We are fully committed to assisting Tribal communities with these investigations, and the MMU will leverage every resource available to be a force-multiplier in preventing these cases from becoming cold case investigations."