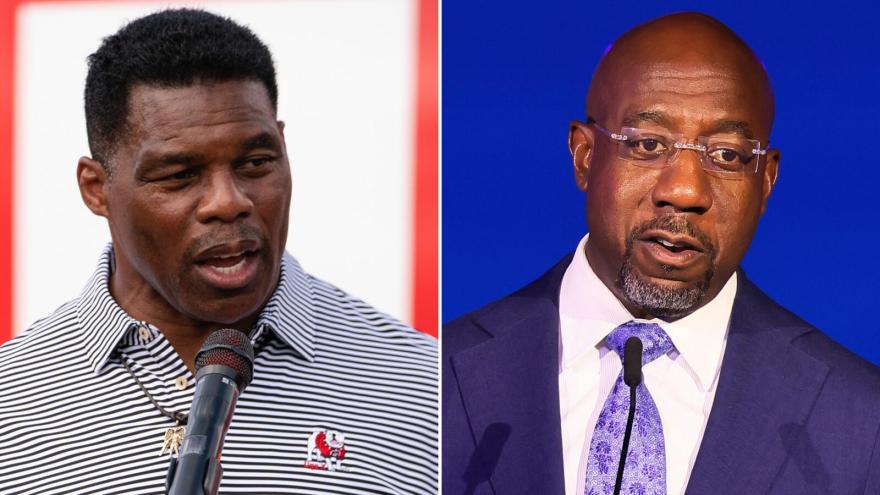 Top Democrats and Republicans alike acknowledge the uniqueness of Georgia's December 6 Senate runoff has put an increased focus on the ability of Democratic Sen. Raphael Warnock and Republican challenger Herschel Walker to turn out voters.

(CNN) -- In Georgia's key Senate runoff, a clichéd political adage could actually prove true: It may all come down to who turns out.

Top Democrats and Republicans alike acknowledge the uniqueness of Georgia's December 6 Senate runoff has put an increased focus on the ability of Democratic Sen. Raphael Warnock and Republican challenger Herschel Walker to turn out voters who may be tired of participating in yet another election, causing campaigns, committees and outside groups to spend millions solely on get out the vote efforts.

While Senate control is not on the line in Georgia -- Democrats kept control of the legislative body with a win in Nevada earlier this month -- a win in the Southern state would allow the party to exit the power sharing agreement with Republicans. Republicans, fresh off taking control of the House of Representatives, would like to build on their wins and keep Democrats from padding their narrow Senate majority.

The reason for the focus on getting out the vote primarily stems from the reality that the pool of voters eligible to vote in the runoff will be the same as the general election, meaning groups cannot register new voters ahead of the key contest. That is because Georgia's 2021 voting law makes it impossible to register new voters before a runoff that is only one month after the general election.

Because of that, the spending on getting out already registered voters is intensifying.

On Thursday, the Warnock campaign -- in collaboration with the state's coordinated campaign and the Democratic Senatorial Campaign Committee -- said it plans to add roughly 300 more paid staffers to its voter contact program, bringing the total of paid staffers focused on turning out voters to 900, a sizable number for a single Senate race. Part of this effort is funded by the Democratic Senatorial Campaign Committee, which announced this month they planned to spend $7 million on field organizing efforts in Georgia.

The operation will be run out of 19 offices in 18 counties across the state, with the goal of knocking on as many doors ahead of the runoff as they did in the four months before the general.

With money beginning to flow into the state, some Democratic aligned groups are hoping to see some of that funding given to local groups focused on turnout.

A Democratic operative familiar with the spending plans of Georgia-based activist groups Unite Here, Asian American Advocacy Fund, Mijente PAC and Black Voters Matter told CNN that the coalition is several million dollars short to execute their get out the vote programs ahead of the runoff.

"We are glad to see the national entities coming into Georgia to support Warnock, but the way to seal the deal is supporting the grassroots organizations at the same time," the operative said. SSA

The progressive group New Georgia Project Action Fund will spend around $4 million in the runoff on its phone, tech bank and canvassing apparatus, according to group CEO Kendra Cotton.

Republicans, too, are pouring money and time into turning out voters.

The focus on turnout is particularly important for Walker, who finished the general election trailing Warnock by over 36,000 votes. That means the burden is on the Republican to increase his vote share, especially since popular Republican Gov. Brian Kemp, who won reelection earlier in the month, won't be on the ballot and therefore won't help boost turnout in December.

Operatives at the Senate Leadership Fund have indicated the best way to stand up a get out the vote operation was to fully fund the already functioning operation that helped elect Kemp. The top Republican outside group, which has deep ties to Senate Republican Leader Mitch McConnell, will spend $2 million to fund the operation, which includes a full data and analytics operation including paid door knocking, phones, modeling and an absentee ballot program.

Republicans appear more worried about turnout in the runoff, a reflection of Walker finishing behind Warnock in the general election this month and lessons operatives said they learned from the 2020 Georgia Senate runoff, both of which were won by Democrats, including Warnock.

"Governor Kemp wrote the playbook for how to win big in Georgia, and we are thrilled to partner with his top-notch team to elect Herschel Walker to the Senate," said Steven Law, the head of Senate Leadership Fund. "As we learned in 2020 Republican turnout is essential for victory in a runoff election, and we are leaving no stone unturned -- preparing a ground assault to partner with the coming air war."

"Republicans are not leaving any stone unturned," said RNC Spokeswoman Savannah Viar, "whereas Warnock clearly only cares about 11% of the state with his paltry 18 county GOTV plan."

Chris Hartline, a spokesman for the Republican Senate committee, said they too have staff and volunteers deployed to the state and are helping raise money for Walker through a joint fundraising committee.

And outside groups like Susan B. Anthony Pro-Life America, an anti-abortion organization, plan to spend $1 million on the runoff, including a focus on turnout efforts.

For Democratic leaning groups, the challenge in turning out voters for the runoff is operating under the rules imposed by SB202, the Kemp-backed voting bill.

"Georgia is a big priority for us. You know, it has strict voter ID laws, full stop. They have a unique and disproportionate impact on young voters of color from our analysis of the situation. And the voter ID laws have changed since 2020," said VoteRiders CEO Lauren Kunis.

"A lot of out of state students who move to Georgia get on campus, and then have only a few weeks to sort of get registered and get state ID, we know that lots of those students probably sit out elections in Georgia because of the logistics around ID," added Kunis.

Warnock, seemingly aware of the risks of asking voters to turn out yet again, warned of a potential runoff ahead of the November election, running ads that joked about the Democratic senator interrupting Thanksgiving.

"I could be interrupting your Thanksgiving, because if nobody gets 50% of the vote, there'll be a run off. And nobody wants that to happen," Warnock said in the ad.

Walker, a former professional football player and icon at the University of Georgia, has framed the runoff in those terms.

"We are in overtime. We got a runoff. I was built for this," Walker said days after the general election.