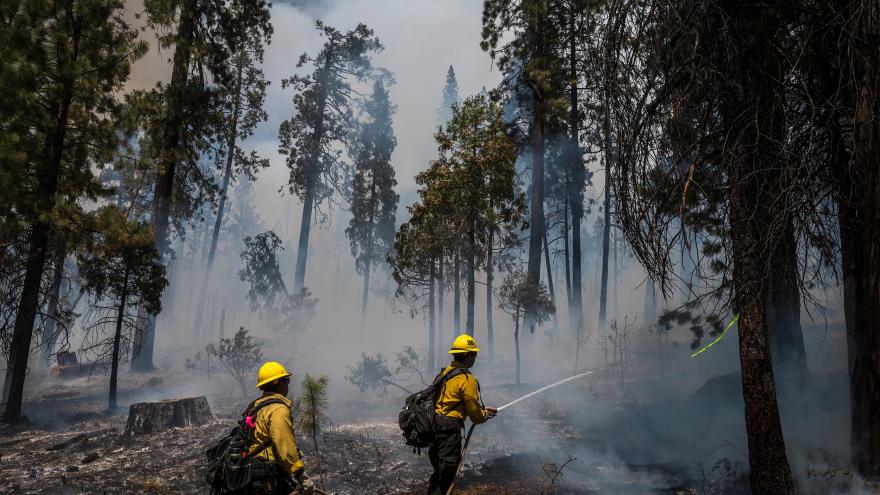 (CNN) -- After more than a year of painstaking negotiations, congressional Democrats on Thursday night found themselves no further on implementing their ambitious climate agenda than when President Joe Biden took office.

For the second time in seven months, Sen. Joe Manchin of West Virginia walked away from a deal to address the climate crisis, citing concerns over spending and inflation.

"Inflation is absolutely killing many, many people. They can't buy gasoline. They have a hard time buying groceries," Manchin told a West Virginia radio host on Friday. "Everything they buy and consume for their daily lives is a hardship to them. Can't we wait to make sure we do nothing to add to that?"

It was deja vu for climate hawks who watched a similar climate bill fail during the Obama administration in 2010, after which then-President Barack Obama had to rely on executive action.

Twelve years later, Democrats again fumbled the climate crisis within yards of scoring, just as climate scientists are becoming increasingly apoplectic about the urgency to act. The eight hottest years on record have all occurred since 2010, and weather disasters have cost the US more than $100 billion per year on average during that time -- almost double what they averaged in the decade before.

Biden walked into the Oval Office promising the boldest climate action of any president before him. But Manchin, heavily invested in the coal industry, has long been skeptical of clean energy. When running for Congress in 2010, Manchin cut a campaign ad of himself shooting Democrats' climate cap-and-trade bill with a rifle.

Manchin dealt the agenda its final blow this week, denying Democrats their chance to pass climate legislation for at least several years.

"He killed this, and he has to own that," John Podesta, Obama's climate adviser and founder of the Center for American Progress, told CNN.

Now Biden and Democrats "have to explain why -- in a context where Democrats had at least nominal control of the White House, House and Senate -- they couldn't get the job done," Podesta said.

CNN spoke with 11 lawmakers, congressional staffers and outside climate advocates who said they place much of the blame squarely on Manchin, a figure several sources described as difficult to pin down, frequently finding new excuses to delay action. A spokesperson for Manchin declined to comment for this story.

Even as Manchin insisted Friday he was still open to a deal on climate measures in September, sources inside and outside the Senate told CNN they were deeply skeptical after months of goalposts being moved.

"It's a bunch of bullsh*t," an exasperated senior Democratic aide told CNN, adding Manchin "does not want to be held accountable."

Others lamented that even as the administration seemed to focus on climate early in Biden's tenure, the congressional result was eerily like Obama's.

"When you have an ally in the White House, these issues become more painful when we give them away," House Natural Resources Chairman Raúl Grijalva told CNN. "Climate change was a priority, but inevitably when we get to this negotiation point, environmental issues, the climate crisis, frontline communities and indigenous issues get put back, they become part of the trade.

"This is a pattern that gets continued every time."

'They will never say what they want'

Just days before Manchin torpedoed the climate measures, Democrats had been feeling confident they could strike a deal that would raise taxes on corporations and wealthier earners, lower prescription drug costs and tackle energy costs and the growing threat of climate change.

As negotiations came to a head mid-week, Senate Majority Leader Chuck Schumer made a number of deep concessions to try to woo Manchin, offering to significantly reshape the bill to fit Manchin's wishlist, according to a Democratic source briefed on the negotiations -- channeling the revenue to tax reform; striking electric vehicle tax credits; adding additional measures to encourage more oil and gas drilling.

Schumer made "concession after concession to at least get the best we could get," Sen. Tina Smith of Minnesota told CNN. "To have Sen. Manchin walk away from that good-faith negotiation was stunning to me."

Manchin's approach to the latest talks was reminiscent of failed negotiations on Build Back Better in December, as well as previous negotiations on Democrats' earlier clean electricity standard that he eventually killed from earlier versions of the bill. Two sources involved in those earlier negotiations with Manchin said the West Virginia senator and his staff often proved impossible to pin down.

Instead of saying what Manchin wanted out of a deal, Manchin's team instead would often criticize what the other side was offering, the sources said.

"It's like a word salad of why they don't like it," one source said. "They will never say what they want; they will attack what you have. [Manchin] so desperately doesn't want to appear to be on the hook -- because he wants to walk away. It's just so slippery."

A Democratic senator told CNN there's a throughline in failed negotiations -- they are often on energy issues, and Manchin has made clear that investments in clean energy must be accompanied by more oil and gas drilling.

"I think it is particularly a problem on energy negotiations," the Democratic senator said, adding that Manchin chairs the Senate Energy and Natural Resources Committee.

Biden, who pledged to slash the country's planet-warming emissions in half as part of rejoining the Paris Agreement, vowed on Friday to take action even without the support of Congress.

"If the Senate will not move to tackle the climate crisis and strengthen our domestic clean energy industry, I will take strong executive action to meet this moment," Biden said in a statement.

Biden didn't provide specifics on the kinds of climate action he would take, but climate advocates told CNN the administration should issue a mix of strong rules to cut emissions from power plants, vehicles and the oil and gas industry.

Advocates are expected to put even stronger pressure on the US Department of Interior to stop oil and gas leasing on federal lands, which has become a politically charged flash point among Republicans and Manchin.

With Manchin's vote no longer attainable, advocates told CNN now is the time to dial executive action and federal regulation up to 100.

"There's no excuse now," Varshini Prakash, co-founder of the Sunrise Movement, told CNN. "What I am looking for is a coordinated agency wide response at the executive level that is utilizing every tool and agency at their disposal to address the climate crisis."

John Larsen, a climate expert and partner at the non-partisan think tank Rhodium Group, said that Biden still has time to distinguish himself from Obama's legacy on climate by continuing to ramp up on clean energy and ramping down on fossil fuels.

"When [the 2010 bill] fizzled out, there was no discussion or action on climate after that until after 2012 election," Larsen said. "Should you repeat that part of the history again, we'll be five years out from 2030."

More immediately, Podesta told CNN, the failure of climate legislation in Congress will hurt Biden and the United States at the next round of international climate talks this November in Egypt.

"I think it weakens the US," Podesta said. "I think that [US Climate Envoy] John Kerry's done a terrific job, but ultimately you have to demonstrate that you can deliver on your commitments, and one's power comes from that."