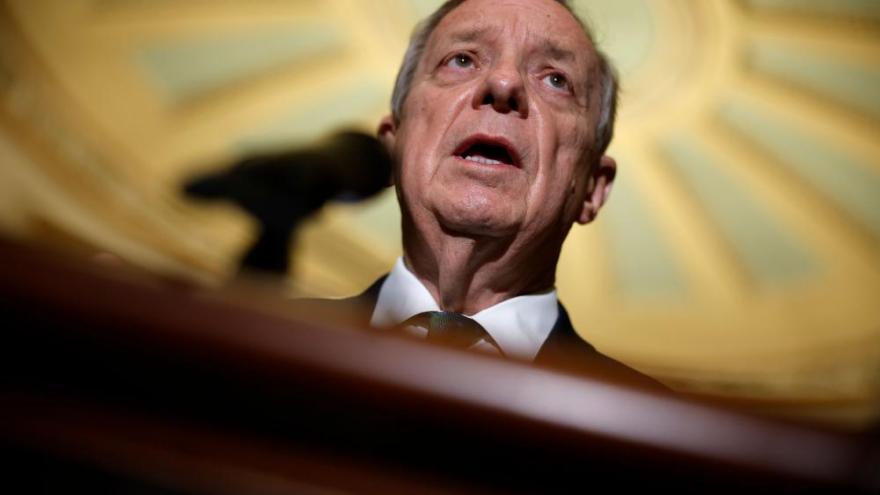 Democrats hope to make progress on Build Back Better in the new year as action stalls for now. Senator Dick Durbin is seen here at the U.S. Capitol on December 14, in Washington, DC.

(CNN) -- With a number of sticking points still unresolved, Democrats are hoping for a breakthrough that will allow them to pass President Joe Biden's sweeping social safety net expansion in the new year.

Senate Majority Whip Dick Durbin was asked by CNN on Friday if Americans should be prepared to wait weeks or potentially months for the legislation, known as Build Back Better. "I can't tell you the timetable," the Illinois Democrat said. "But I will tell you that I think it's healthy that senators are going home to eggnog and fruitcake. Maybe that will improve their attitudes."

Durbin said that he shares "the President's optimism that the importance of our undertaking demands that we come back quickly in January and resume these negotiations."

Democratic leadership had initially pushed for a Senate vote on Build Back Better before Christmas, but action on the legislation has been delayed for a variety of reasons. Earlier this week, CNN reported that critical talks between Biden and West Virginia Democratic Sen. Joe Manchin, a critical swing vote, remained far from a resolution on a series of issues. Lawmakers are also grappling with how to resolve policy disputes such as how to deal with a controversial state and local tax deduction and legislative text is not yet finalized.

The pressure is on for Democrats to pass the legislation, which stands as a centerpiece of Biden's domestic agenda and would deliver aid to families, expand access to health care and combat climate change. But to accomplish that, the party must achieve total unity in the Senate where all 50 members of the Senate Democratic caucus must vote for the bill to pass it under a process known as reconciliation, which would permit Democrats to approve the bill without Republican votes.

The Democratic-controlled House passed the Build Back Better Act in November, but the bill has been expected to face substantial revisions in the Senate before it can pass out of the chamber in order to win over Manchin and other moderates.

On Thursday, Biden implicitly acknowledged in a lengthy statement that ongoing negotiations with Manchin and procedural steps would cause Democrats to miss the self-imposed Christmas deadline for Senate passage of the package, noting that Democrats will continue to work together "over the days and weeks ahead" to get the proposal to the Senate floor.

The Senate is currently still in session and is taking votes related to nominations. Once those votes have concluded, the chamber is likely to break for the holiday season.

"Yesterday I had a good discussion with the President and the speaker where we talked about ongoing negotiations on finalizing the Build Back Better Act so we can pass it through the Senate," Senate Majority Leader Chuck Schumer said Friday during floor remarks.

The New York Democrat went on to say that "the President requested more time to continue his negotiations and so we will keep working, working with him hand in hand to bring this bill over the finish line."