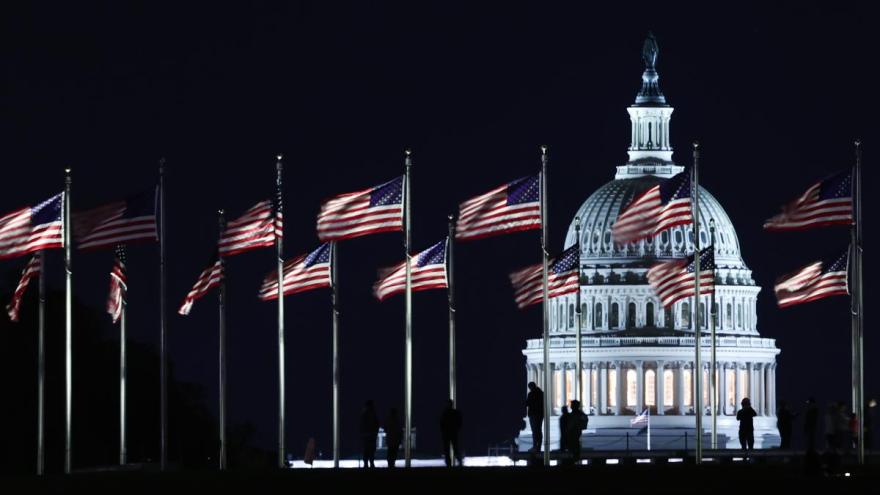 The Capitol building is seen through the American flags in Washington DC on October 20. Democrats will keep their narrow Senate majority for the next two years.

(CNN) -- Democrats will keep their narrow Senate majority for the next two years, CNN projects, after victories in close contests in Nevada and Arizona.

The party defied the historical trend of midterm elections breaking against parties in power and overcame anxiety over high inflation, cementing its majority as voters rejected Republican candidates who had aligned themselves with former President Donald Trump and in many cases parroted his lies about widespread election fraud.

Retaining Senate control is a huge boost to President Joe Biden over the remaining two years of his first term in the White House, with one more Senate race outstanding that will determine the final balance of power in the chamber -- and how much leverage the president's party will ultimately have.

"I think it's a reflection of the quality of our candidates," Biden told reporters in Cambodia shortly after CNN and other news outlets projected Democrats would keep their Senate majority. "They're all running on the same program. Wasn't anybody who wasn't running on what we did," Biden went on.

Democrats will have the ability to confirm Biden's judicial nominees -- avoiding scenarios such as the one former President Barack Obama faced in 2016, when then-Senate Majority Leader Mitch McConnell refused to hold a vote on his Supreme Court nominee, Merrick Garland. It also means that Senate Democrats can reject bills passed by the House and can set their own agenda.

The Senate win comes with control of the House -- where Republicans were widely expected to win a majority -- still up for grabs. Ballots are still being counted in key districts in some states, including California, Arizona and Oregon, with large shares of mail-in ballots. Even if Democrats don't retain control of the House, they could leave the GOP with a small and unruly majority.

After CNN projected Democratic victories in Arizona on Friday and Nevada on Saturday, Democrats now have 50 Senate seats to Republicans' 49 seats. Although it no longer matters for control of the chamber, Georgia's Senate runoff will determine just how big Democrats' majority is.

Democratic Sen. Raphael Warnock and Republican challenger Herschel Walker are facing off on December 6 after neither candidate cleared the 50% threshold on Tuesday.

Biden said he was "looking forward to the next couple of years" with Democrats, and said he was now focused on the Senate runoff in Georgia, acknowledging it would be better to have 51 seats in the Senate.

"It's just simply better, the bigger the number the better," he said.

The Senate is currently evenly split, with Vice President Kamala Harris holding the tie-breaking vote, but that's meant that Democrats have no votes to spare.

Senate Majority Leader Chuck Schumer on Saturday night called the Democrats' hold on the Senate a "vindication" of the party's agenda and said it amounted to a rejection of "anti-Democratic, extremist, MAGA Republicans."

"Oh and one other thing we did, which I cannot forget, we staunchly defended a woman's right to choose," Schumer said, referring to the battle over abortion rights after the Supreme Court overturned Roe v. Wade.

"Because the American people turned out to elect Democrats in the Senate, there's now a firewall against a nationwide abortion ban threat that so many Republicans have talked about."

Only one Senate seat has changed hands so far in the 2022 midterm elections: Pennsylvania, where Democratic Lt. Gov. John Fetterman, who campaigned as he recovered from a May stroke, defeated Republican Mehmet Oz, the celebrity doctor who was endorsed by former President Donald Trump.

Democrats' defied political gravity to deliver a surprisingly strong midterm showing. CNN exit polls showed that 49% of voters who said they somewhat disapprove of Biden voted for Democrats while 45% backed Republicans; of the 38% of voters who said the condition of the economy is "not so good," 62% voted Democratic compared to 35% for the GOP.

Ultimately, the battle for Senate control came down to Arizona and Nevada -- states with large shares of mail-in ballots and rules that can slow the processing of those ballots.

In Arizona, CNN projects that Democratic Sen. Mark Kelly, a former astronaut and the husband of former Rep. Gabrielle Giffords, will defeat Republican Blake Masters, a venture capitalist who was endorsed by Trump and supported by tech mogul and emerging GOP megadonor Peter Thiel.

In Nevada, CNN projects that Democratic Sen. Catherine Cortez Masto, a former prosecutor and state attorney general, will defeat Republican Adam Laxalt, her successor in the attorney general's office and the son and grandson of former senators.

Both Masters and Laxalt had at times embraced and parroted Trump's lies about widespread 2020 election fraud.

Laxalt was a co-chairman of Trump's 2020 presidential campaign in Nevada and played a leading role in legal efforts to reverse the results in that election, which he said was "rigged." Cortez Masto had argued that the lies and election conspiracy theories embraced by Trump and allies like Laxalt led to the attack on the US Capitol on January 6, 2021.

Masters released a campaign video as he was competing for the GOP nomination in which he said he believed Trump had won the 2020 election.

After winning the Senate primary, Masters briefly appeared to back away from some of that extreme rhetoric -- scrubbing his website, for example, of language that included the false claim that the election was stolen. In a debate with Kelly, he also conceded that he had not seen evidence of fraud that would have changed the outcome of the election. But the Republican nominee seemed to reverse course after receiving a phone call from Trump urging him to "go stronger" on election denialism, a conversation that was captured in a Fox documentary.