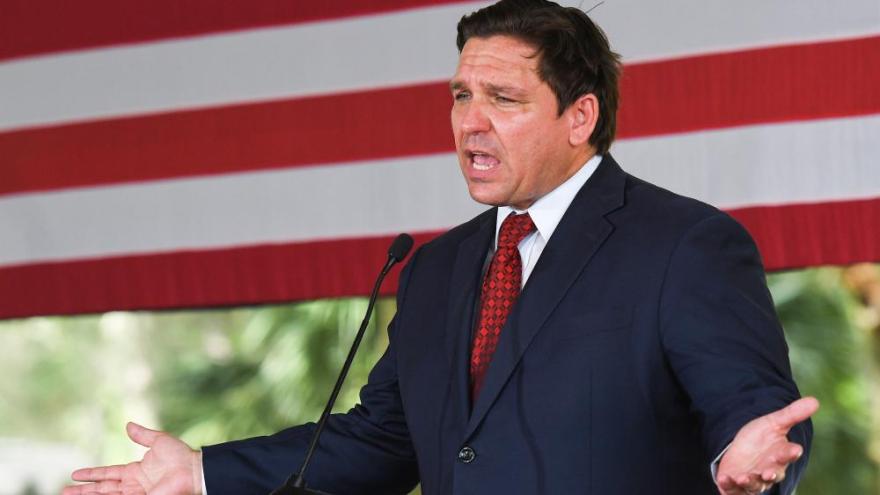 Florida Governor Ron DeSantis has already faced challenges during his first term, including a two-year pandemic and an environmental catastrophe. He's now priming for a more traditional but no less daunting test of Florida leaders: a hurricane.

(CNN) -- Gov. Ron DeSantis has already faced unprecedented challenges during his first term, including a two-year pandemic and a vexing environmental catastrophe. He's now priming for a more traditional but no less daunting test of Florida leaders: a hurricane.

Hurricane Ian, a 500-mile wide storm building strength in the Gulf of Mexico, is expected to blast into Florida's west coast Wednesday, carrying with it a potentially deadly combination of wind, rain and storm surge. If the state's painful history with Mother Nature is any indication, the recovery from Ian will be measured in months, hundreds of millions of dollars and untold heartache.

DeSantis on Wednesday morning warned the highest risk is from Collier County up to Sarasota County, with landfall expected in Charlotte County.

"If you are in any of those counties, it's no longer possible to safely evacuate. It's time to hunker down and prepare for this storm. This is a powerful storm that should be treated like you would treat" a tornado approaching your home, he said.

How DeSantis, a national figure in the Republican Party with presidential aspirations, responds to the crisis will be closely watched. He faces reelection in six weeks, and besides testing his administration's readiness, Hurricane Ian threatens to further expose a looming property insurance crisis in the state that his Democratic opponent, Charlie Crist, had already made into a campaign issue long before Ian formed.

The storm also arrives at an especially fraught moment in the Republican's caustic relationship with the Democratic White House. It was just days ago that President Joe Biden angrily scorned DeSantis for sending migrants from the border to Martha's Vineyard as "un-American" and "reckless." DeSantis shot back that Biden's immigration policies were causing "huge damage to our country."

Still, Biden spoke Tuesday evening with DeSantis, according to White House press secretary Karine Jean-Pierre, and they "committed to continued close coordination," she said in a tweet.

Both DeSantis and Biden have insisted that their respective governments are collaborating as planned in the days leading up to Ian's arrival. DeSantis said he is already working closely with the Federal Emergency Management Agency. Biden told reporters Tuesday his administration was "on alert and in action to help the people of Florida."

Biden had reached out to the Tampa Bay area's three mayors earlier Tuesday as forecasts at the time predicted the region would bear the brunt of the storm. Tampa Mayor Jane Castor stepped away from a news conference Tuesday to answer the President's call.

"He just wanted to ensure that we had all the resources we needed, and clearly just wishing us the best," Castor told reporters after hanging up with the White House.

At a news briefing Tuesday afternoon ahead of his conversation with Biden, DeSantis had said, "My phone is open," and he is "happy to brief the president if he's interested in hearing what we're doing in Florida."

Hurricanes in Florida have the potential to create defining moments for Florida's leaders. It took almost two years for Democratic Gov. Lawton Chiles' political standing to recover from the state's slow response to the devastation to South Florida caused by Hurricane Andrew in 1992. Republican Gov. Jeb Bush managed Florida through a handful of damaging hurricanes over 14 months from 2004 to 2005, including Charley and Katrina, and it earned him a reputation as an unflappable and deliberate executive. When then-Republican Gov. Rick Scott changed out of his executive boardroom suit and into his blue Navy baseball hat, Florida residents took it as a sign to get ready for a weather event.

DeSantis knows better than most how storms can affect the political winds in Florida. He was elected in 2018 just days after the arrival of Hurricane Michael, a sudden and powerful storm that ripped through the Panhandle that October and killed at least 16 people across a handful of states while nearly eliminating the town of Mexico Beach. Some parts of northern Florida had trouble regaining electricity, let alone opening polling locations.

"Everyone asks, 'How do you think they're doing?' It doesn't matter what I think, it matters what the public thinks," said Craig Fugate, who was Florida's director of emergency management under Bush. "Is there something that gets attributed to him, that gets blamed on his response? There will be noise in the system, it doesn't mean they'll blame the governor. It'll be based on how he is perceived, the leadership role, his presence."

DeSantis has responded by putting politics on the back burner, at least for now. His news conferences -- the regularly scheduled episodes of political theater that have produced viral moments like his combative exchange with a "60 Minutes" reporter over vaccine distribution and his public admonishing of students for wearing masks -- have centered exclusively on preparing Floridians for the storm. He has taken the expected procedural steps -- declaring a state of emergency, mobilizing the Florida National Guard, and readying the Emergency Operations Center.

"My view on all this is like you've got people's lives at stake, you've got their property at stake and we don't have time for pettiness," DeSantis said Tuesday evening. "We've gotta work together to make sure we're doing the best job for them."

Crist, DeSantis' opponent, has pulled his ads off the airwaves in most of the state's television markets and has returned to his home in Pinellas County, where the storm is expected to have considerable impact. DeSantis' campaign did not respond to a question about the storm's impact on DeSantis' political activity.

A shift in tone, but sticking to his style

An abrasive political style is what has endeared DeSantis to Republican voters across the country amid his ascent within his party, but it has also resulted in strained relationships with the same local and national leaders DeSantis must now collaborate with to get Florida through this storm.

After initially ceding coronavirus action to city mayors and county officials, DeSantis made a hard pivot and stripped municipalities of their ability to manage the pandemic while encouraging residents to ignore local precautions on masks and other mitigation measures.

DeSantis has repeatedly suggested Biden's disdain for the Republican leader has affected bureaucratic decisions, like whether to give the state access to certain coronavirus remedies. Earlier this year, he accused Biden of denying FEMA assistance to some Floridians on the west coast impacted by spring tornadoes out of spite.

"To deny tornado victims just because of politics is wrong," DeSantis said in March, without presenting evidence to support his theory.

But with Ian headed toward Florida, DeSantis issued the rare compliment of the White House after Biden declared a state of emergency for the state.

"They stand by ready to help, so we appreciate that quick action," DeSantis said on Saturday.

Rick Kriseman, who was mayor of St. Petersburg until last year, said DeSantis' past actions have made it more difficult for everyone to work together.

"You have to hope that it doesn't negatively impact the quality of the response," Kriseman said. "I do believe because it's an election year for him that the response will be different."

Kriseman said Scott as governor called early and often during a crisis, even though the two were from different parties. Though they overlapped for three years, Kriseman said DeSantis didn't call once, even as his coronavirus orders regularly left communities confused and desperate for answers.

Adam Smith, a spokesman for Castor, said DeSantis has not called the Tampa mayor. Scott, however, did reach out to her, Smith said.

"What Scott did, what Charlie Crist did, was pick up the phone, call the community and mayors at risk and you reassure them," Kriseman said. "That call goes a long way. Being the first voice that a community leader hear makes it easier and it works better."

Jared Moskowitz, a Democrat who served as DeSantis' director of emergency management before leaving to run for US House, said that it's a difference in style that had no bearing on the outcome of the state's response.

"As long as the mayors are talking to the (Division of Emergency Management), who is in charge of responding to the storm, it's a distinction without a difference," Moskowitz said.

"Governors might have different styles, but what is the end result?" Moskowitz said. "That's what is important."