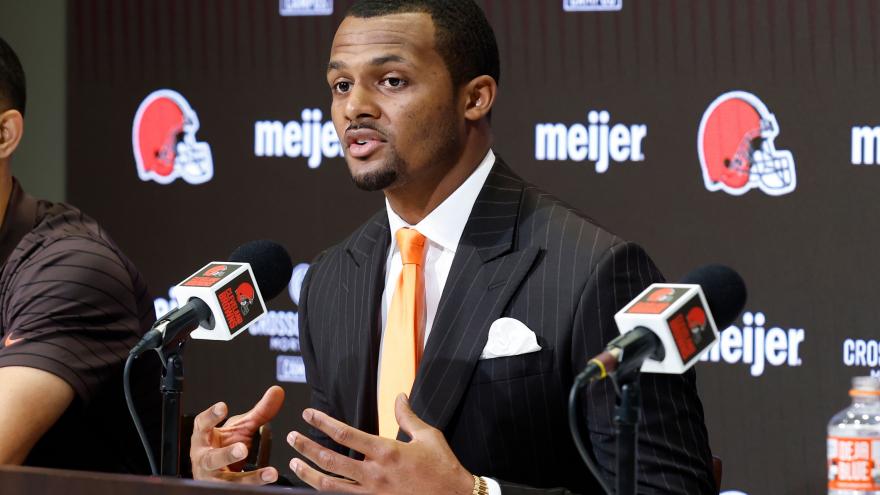 (CNN) -- At an introductory news conference Friday, Cleveland Browns quarterback Deshaun Watson, recently acquired from the Houston Texans, repeatedly denied the accusations of sexual assault and misconduct made against him by nearly two dozen women in civil lawsuits.

"I've never assaulted, I never disrespected and I never harassed any woman in my life," Watson told reporters Friday.

"As far as the details of actually, the things that they're alleging, I can't speak on that because there's an ongoing investigation, but in the future, once everything is resolved, I would love to talk about it," Watson added.

Grand juries in Harris County and Brazoria County in Texas each declined to charge Watson criminally, but he still faces 22 civil complaints from his accusers, many of them alleging sexual assault and misconduct.

When asked whether he had any regrets about his off-the-field situation, Watson answered, "I don't have any regrets. Like I said before, the things that are off the field right now that came up caught me by surprise because I never did anything that these people are alleging."

The Browns front office also faced tough questions about their decision to trade for Watson after conducting what the team previously called a "comprehensive evaluation" of the situation, with attorney Tony Buzbee -- who represents Watson's 22 accusers -- saying the Browns never reached out to him or his clients in an attempt to research Watson.

"We were advised by our attorneys, we were advised against reaching out directly to the 22 women out of concern that it would be considered interfering with a criminal investigation," Browns general manager Andrew Berry told reporters. "And it's this among several other reasons that made it important for us to use independent investigative resources that were unbiased and comprehensive so that we could get a full picture and full perspective of the criminal and civil cases."

On Thursday, after the Brazoria County grand jury decided not to indict Watson, NFL spokesperson Brian McCarthy told CNN, "We continue to closely monitor all developments in the matter which remains under review of the personal conduct policy." If the league's investigation, which is ongoing, determines Watson violated the personal conduct policy, he could be subject to discipline, including suspension.

Browns owners Jimmy and Dee Haslam held a separate news conference Friday on Zoom, with Jimmy Haslam telling reporters the organization "got strong recommendation from legal counsel for us not to reach out to the 22 women."

He later added: "I can tell you, however, that in research we did directly and research third parties did, that we got comfortable with the situation."

Watson, 26, was selected to three Pro Bowls in his five seasons with the Houston Texans. He did not play during the 2021 season because of the investigations into the allegations.