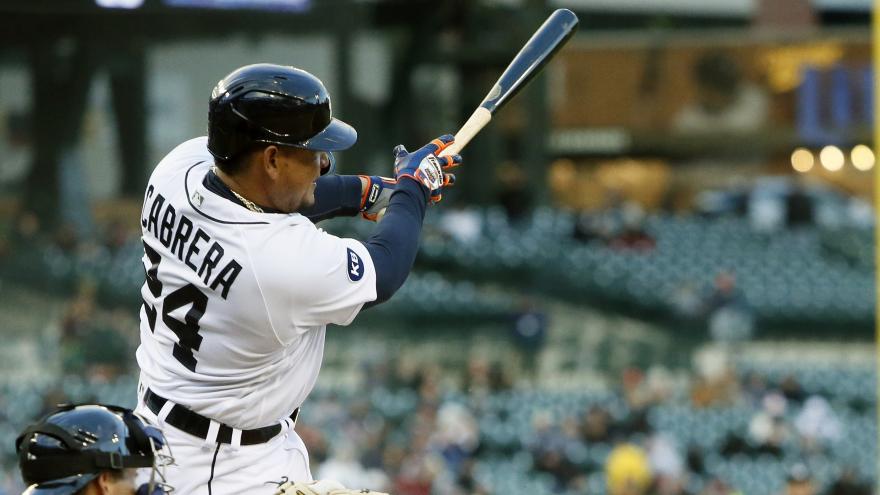 (CNN) -- Detroit Tigers slugger Miguel Cabrera entered the vaunted 3,000-hit club Saturday with an opposite field single in his first at-bat at home against the Colorado Rockies.

The 39-year-old Venezuelan, in his 20th season, is the 33rd player to reach the milestone in the 119-year-old history of Major League Baseball.

After the hard grounder to right, with a runner on first base, Cabrera pointed his right arm toward the sky and pumped his fist on his way to first. He then exchanged a hug with Rockies shortstop Jose Iglesias, a friend and former Tigers teammate.

"Seeing Miguel grow from a teenager taking batting practice on the neighborhood fields in Venezuela to becoming one of the best players in baseball history has been one of the great joys of my life," Al Avila, the Tigers executive vice president and general manager, said in a statement.

"His humility, passion for having fun and genuine love of the city of Detroit are completely unmatched and joining the 3,000 hit club only strengthens his standing as one of the game's all-time greats."

Tigers' Chairman and CEO Christopher Ilitch, said: "I thank Miguel for a career of exciting, Hall of Fame caliber play towards our objective of championship baseball for Tigers fans. Miggy has and continues to build his status as one of the greatest Tigers of all-time."

Now Cabrera is just one double away from securing a spot as one of the game's premier hitters -- becoming only the third player in MLB history with 3,000 hits, 500 home runs and 600 doubles in his career.

In 2012, Cabrera became the first player to win the Triple Crown since Carl Yastrzemski in 1967 after leading the American League in home runs, RBIs and batting average.

A native of Maracay, a city in north-central Venezuela near the Caribbean coast, Cabrera was 20 years old when he debuted in the big leagues with the Florida Marlins in 2003. The Marlins won the World Series that year.