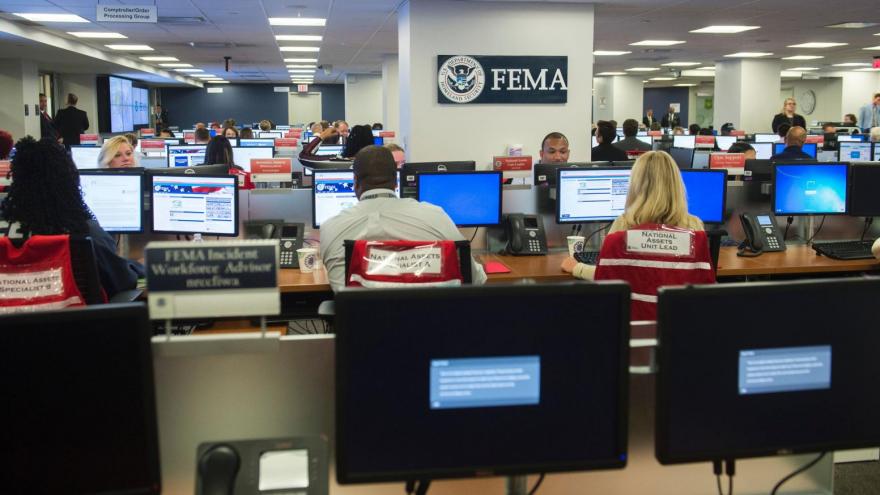 The Federal Emergency Management Agency's response to Hurricanes Harvey, Irma and Maria in 2017 was "hindered" by the agency's IT resources, which led to employees having to use personal computers and public wireless networks during its recovery effort, the Department of Homeland Security inspector general said in a report released

(CNN) -- The Federal Emergency Management Agency's response to Hurricanes Harvey, Irma and Maria in 2017 was "hindered" by the agency's IT resources, which led to employees having to use personal computers and public wireless networks during its recovery effort, the Department of Homeland Security inspector general said in a report released Tuesday.

FEMA "has not implemented two essential IT management practices -- strategic planning and enterprise architecture development -- both necessary to effectively guide IT resources," the report states. The practices were mandated for all federal agencies "more than 20 years ago," and the IG's office has been reporting the issues in the new report to FEMA for 13 years.

The 46-page report comes as the agency prepares to respond to potential destruction brought by Hurricane Dorian, now a powerful Category 2 storm that is slowly heading toward the East Coast of the United States. The agency is still facing scrutiny for its response two years ago to Hurricanes Irma and Maria, which devastated parts of the US Virgin Islands and Puerto Rico, and Hurricane Harvey, which made landfall as a tropical storm near the Louisiana-Texas border.

In some cases, FEMA employees were instructed to perform official work in unconventional ways due to IT problems.

"For example, following the hurricanes and wildfires in 2017, some FEMA personnel used their personal laptop computers in place of FEMA's official systems to keep pace with mission requirements," the report said.

"In some situations, wireless connections were so poor that supervisors instructed staff to work from their hotel rooms for improved wireless access using the hotel network service. In other cases, personnel relied on public Wi-Fi service at commercial facilities, like fast food restaurants, to perform required work," the report said.

The report outlined a range of issues related to FEMA's IT practices, including problems related to personnel and physical devices needed during the 2017 hurricane recovery effort. According to the report, agency employees told the IG that a "Technical Reference Model" they used in 2017 "did not include tools essential for FEMA's response and recovery work, such as mobile and wireless devices, external hardware, and removable storage."

Due to staffing shortages during the recovery effort within FEMA's Office of the Chief Information Officer, the agency was forced to send a significant number of employees out of the office "to support field operations," resulting in major disruptions in FEMA's ability to work on initiatives related to the agency's IT practices, the IG said. Additionally, FEMA's chief information office, the report said, went $56 million over budget in the last fiscal year because of their inability to "plan and budget long-term for agency-wide IT needs."

According to the report, agency employees in several regions said that following the 2017 hurricanes, IT-related issues in FEMA's data warehouse, which is used to perform a number of agency responsibilities, resulted in a "significant effect on FEMA's ability to perform critical work" because it "slowed the processing of hundreds of thousands of individual assistance applications for disaster survivors who had suffered damage or loss to their personal property."

FEMA spokeswoman Abbey Dennis said in a statement to CNN that during the hurricane recovery efforts in 2017, the agency established a wireless network "that supported multiple disasters to connect enterprise networks quickly and securely," adding that the agency has completed several other initiatives to improve its IT management.

"While technology is a critically important tool to expedite the delivery of our mission, our well-trained response personnel work hard to fill any gaps as quickly as possible," Dennis said.