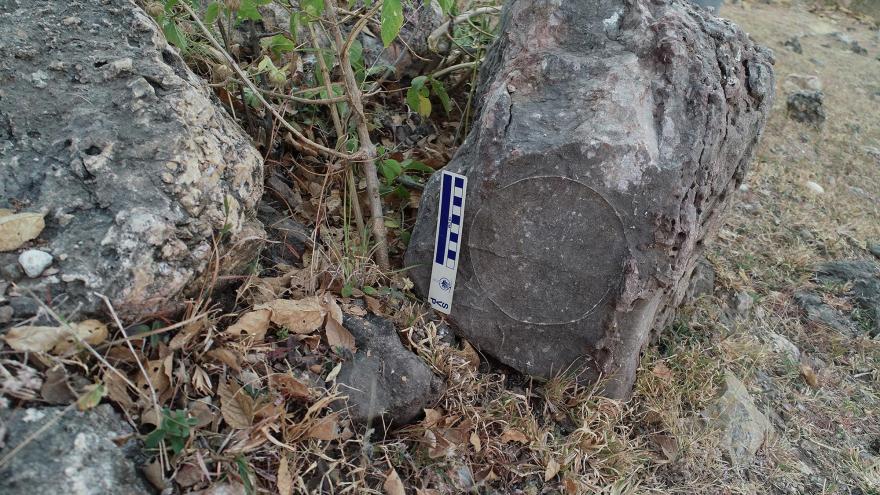 (CNN) -- To pry open the mysteries of our planet's past, scientists typically study rocks and fossilized bones.

Eggs are an often overlooked but extremely rich source of information, with birds, reptiles, dinosaurs and a few oddball mammals laying them on land for more than 200 million years.

Rare fossilized eggshells can illuminate the behavior and diet of ancient creatures, expose changes in climate, and shed light on how our prehistoric relatives lived and communicated.

And now, an "eggciting" discovery in India announced this week has revealed intimate details about the lives of some of the biggest dinosaurs to walk the Earth.

Paleontologists in central India have unearthed a fossilized dinosaur hatchery with 92 nests and 256 eggs belonging to colonies of giant plant-eating titanosaurs.

Judging by the nests' proximity to one another, researchers inferred the dinosaurs laid eggs together in colonies or rookeries, as many birds do today.

However, unlike most bird species, titanosaurs weren't doting parents. Researchers think these creatures likely laid their eggs and then left their offspring to fend for themselves.

"Since titanosaurs were huge in size, closely spaced nests would not have allowed them to visit the nests to maneuver and incubate the eggs or feed the hatchlings ... as the parents would step on the eggs and trample them," said lead study author Guntupalli Prasad, a paleontologist at the University of Delhi.

Planting a tree is a fitting memorial to a loved one, but how about "becoming" a tree after death?

Transcend, a New York-based green burial start-up, is one company offering a way for people to make a positive environmental impact when they shuffle off this mortal coil.

Customers will select a tree species to be planted over the body, which will be prepared with biodegradable flax linen and buried with wood chips, local soil and fungi to facilitate composting. The site is marked, and the tree left to grow.

Advocates hope green burials can help slow the climate crisis, but the industry is new — Transcend hasn't planted any people yet — and there is little research on how much better human composting is for the environment compared with traditional burials.

Want more ideas on how to tackle the climate crisis and reduce your eco-anxiety? Sign up for CNN's Life, But Greener limited newsletter series.

Australia's echidna, like the platypus, belongs to an odd group of mammals that lay eggs, known as monotremes. But the spiky creature's egg-laying ability isn't its only unusual characteristic.

Despite being one of the world's oldest surviving species, echidnas are also thought to be sensitive to heat. Researchers, however, have discovered the echidna uses a unique method to cool down and stay active at much higher temperatures than previously known.

Infrared footage of 124 echidnas shot over the space of a year revealed how they beat the heat of global warming: The creature blows mucus bubbles, which burst over its nose tip and wet it. As the moisture evaporates, it cools the echidna's blood, with the nose tip acting as an "evaporative window."

When the Artemis I mission lifted off in November, NASA's Space Launch System performed as advertised. The most powerful rocket ever flown provided the propulsion needed to send the Orion spacecraft on a journey around the moon and back.

But SLS has long been considered controversial, and NASA and Boeing, which was responsible for the rocket's core stage, have both received criticism for delays and whopping price tags.

The complicated history of SLS has left some industry insiders with conflicting feelings about the rocket and its place in the Artemis program, which is designed to land humans on the moon and eventually reach Mars.

Meanwhile, astronomers have now documented the cosmic drama that is the Milky Way in unprecedented detail during the Dark Energy Camera Plane Survey — and it produced a breathtaking image.

Runes are the oldest known form of writing in Scandinavia and are closely associated with the Viking Age between 793 and 1066 — a time from which thousands of stones with runic inscriptions have been found.

Older runestones are much rarer, and archaeologists in Norway have recently discovered the most ancient known example — thought to be around 2,000 years old.

Researchers at the University of Oslo's Museum of Cultural History spotted the stone while investigating a burial ground in the municipality of Hole in eastern Norway in 2021.

Eight runes on the front face of the reddish-brown sandstone boulder spell "idiberug" when converted into Roman letters. According to one of the archaeologists, it could be the name of a woman.

Immerse yourself in these engrossing stories:

— Scientists have discovered a foot-long snake in the Ecuadorian Amazon. It shares a key trait with its much larger cousin — the boa constrictor.

— NASA and Boeing are teaming up to design a new type of emission-reducing, single-aisle aircraft. Air travelers could benefit in the 2030s.

— Analysis of DNA extracted from the skeletal remains of more than 100 individuals has revealed that, in ancient Greece, marrying your cousin was not just allowed — but encouraged.