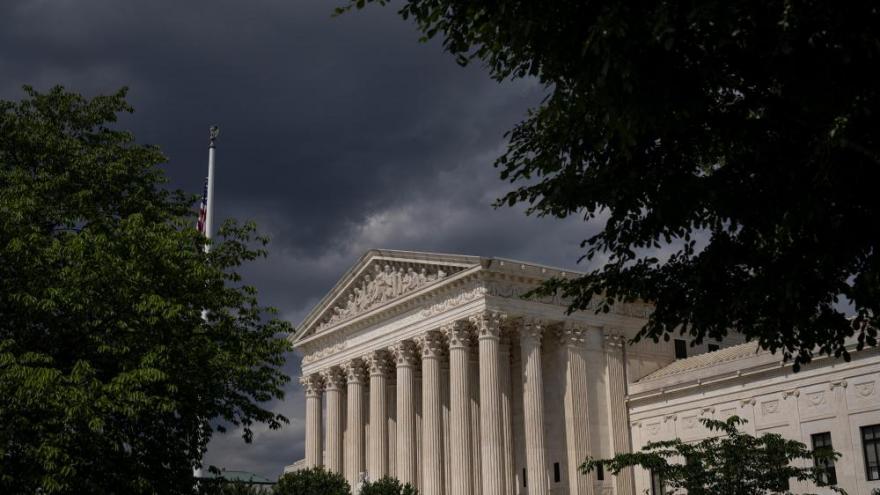 The Department of Justice asked the Supreme Court on Thursday to allow a vaccine mandate aimed at certain extra health care workers to go into effect nationwide.

(CNN) -- The Department of Justice asked the Supreme Court on Thursday to allow a vaccine mandate aimed at certain extra health care workers to go into effect nationwide, marking the first time the justices have been asked to weigh in on a federal mandate the Biden administration put in place in order to get more Americans vaccinated in the midst of a surge of the Delta and Omicron coronavirus variants.

So far, lower courts have blocked the health care worker mandate from being enforced in about half the country.

The vaccine policy in question was rolled out by the US Department of Health and Human Services' Centers for Medicare & Medicaid Services, which sought to require the Covid-19 vaccine for health care workers at certain providers that participate in Medicare and Medicaid. According to government estimates, the mandate regulates more than 10.3 million health care workers in the United States

In the new filing, Solicitor General Elizabeth Prelogar asked the justices to put two lower court opinions on hold while the appeals process plays out. In briefs, she told the justices that the "unprecedented pandemic" has killed 800,000 Americans and that "the Secretary of Health and Human Services exercised his express statutory authority to protect the health and safety of Medicare and Medicaid patients by requiring healthcare facilities that choose to participate in those programs to ensure that their staff are vaccinated (subject to medical and religious exemptions)."

She said the requirement will "save hundreds or even thousands of lives each month."

And Prelogar warned that the mandate was necessary to reduce the risk of exposure for Medicare and Medicaid patients given the anticipated winter surge. She said in recent weeks "new Covid-19 cases have already increased by more than 60% to nearly 120,000 per day and warned that the Omicron variant "threatens to drive up case rates."

RELATED: Trump-appointed judges question role of vaccines in fight against Covid as they block mandates

Two other major Biden vaccine policies -- one dealing with federal contractors and another aimed at companies with 100 or more employees -- have also been halted by courts and are likely to make their way eventually to the Supreme Court.

The justices have already turned away attempts to block vaccine mandates issued by states, but the federal mandates raise different legal questions. Critics say that the Centers for Medicare and Medicaid Services acted outside the scope of its authority when issuing the mandate because Congress never specifically authorized the agency to issue such a broad rule. They also charge the agency with bypassing normal procedures which would have allowed stake holders to weigh in on the mandate.

"There is no question that mandating a vaccine to 10.3 million healthcare workers is something that should be done by Congress, not a government agency," a judge on the United States District Court for the Western District of Louisiana held in ruling against the Biden administration in November.

This story has been updated with additional details Thursday.