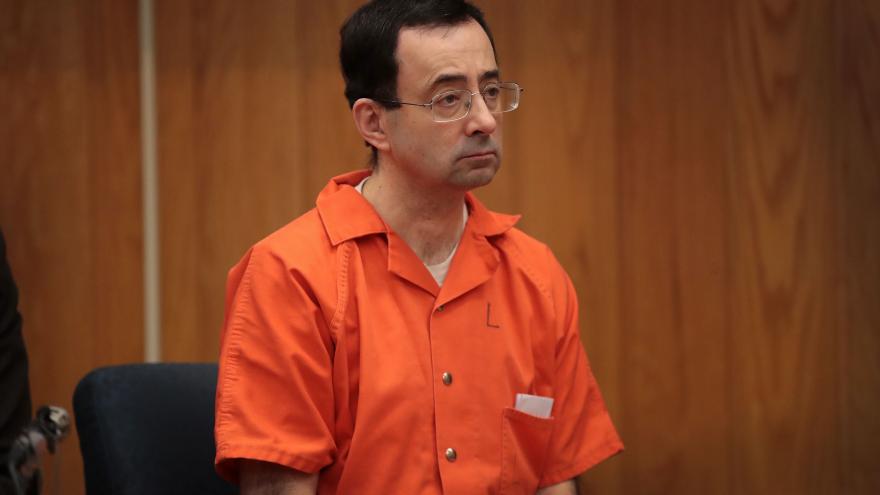 In a Thursday statement, the department said that the latest decision to decline prosecution of the agents came "after multiple reviews and analyses of evidence gathered in the investigation of the former agents, and reflects the recommendation of experienced prosecutors."

A Justice Department inspector general report found gross failures on the part of the FBI to properly investigate complaints from gymnasts, who told the bureau in 2015 about the abuse. The inspector general found the agents lied to investigators, but the Justice Department during the Trump administration and again early in Biden administration declined to bring charges.

From July 2015, when USA Gymnastics officials first notified the FBI about abuse allegations against Nassar, and September 2016, when the FBI finally began to take meaningful investigative steps, at least 70 athletes were abused by him, the inspector general reported.

"This does not in any way reflect a view that the investigation of Nassar was handled as it should have been, nor in any way reflects approval or disregard of the conduct of the former agents," the Justice Department statement said.

Victims of Nassar, including Olympic gymnasts McKayla Maroney and Simone Biles, appeared before a Senate hearing last year and sharply criticized the FBI and the Justice Department for not charging the former agents.

"The continued failure by the Department of Justice to criminally charge the FBI agents, USA Gymnastics and USOPC officials who conspired to cover up the largest sex abuse scandal in the history of sport is incomprehensible," Manly said. "On September 13, 2021, gymnasts Simone Biles, Aly Raisman, McKayla Maroney, and Maggie Nichols shared heart wrenching testimony with the Judiciary committee, pleaded for justice and were promised action by Deputy Attorney General Lisa Monaco. There was no action for more than six months and now this promise to survivors has been broken."

The FBI has apologized for the mishandling of the Nassar case and has said it adopted a series of recommendations from the inspector general to prevent the mistakes from happening again.

The inspector general report last year found that senior officials in the FBI Indianapolis Field Office failed to respond to the Nassar allegations with the utmost seriousness and urgency that they deserved and required, made numerous and fundamental errors when they did respond, and violated multiple FBI policies when undertaking their investigative activity. The probe was opened in 2018 to see whether the FBI and its field offices dragged their feet to respond to allegations of sexual assault made by gymnasts and the USA Gymnastics organization in 2015 and 2016.

The release of the 119-page report comes a little over a year after more than 120 of the survivors asked the Justice Department to make the findings public.

Nassar, 58, is serving a 40-to-174-year state prison sentence after 156 women and girls said he sexually abused them over the course of 20 years.

The former USA Gymnastics and Michigan State University doctor pleaded guilty in November 2017 to seven counts of criminal sexual conduct for using his profession as a cover to sexually abuse his patients.