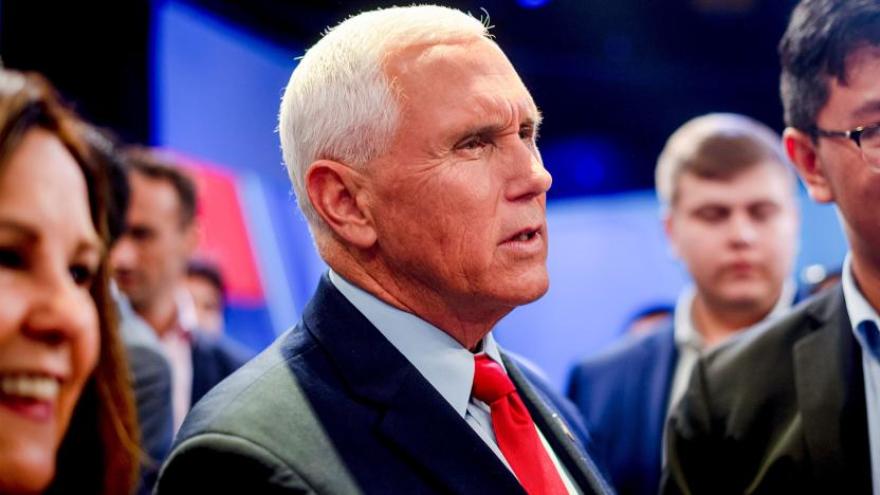 Former Vice President Mike Pence and his wife Karen Pence are seen here after speaking with CNN's Jake Tapper at CNN studios in Manhattan. DOJ prosecutors are seeking testimony from Pence in the January 6 criminal probe.

(CNN) -- Justice Department prosecutors have reached out to representatives of former Vice President Mike Pence to seek his testimony in the criminal investigation into efforts by former President Donald Trump and allies to impede the transfer of power after the 2020 election, according to people familiar with the matter.

Pence's team has indicated that the former vice president is open to discussing a possible agreement with the Justice Department to provide some testimony, one person said.

The New York Times first reported the outreach to Pence.

The request occurred before the Justice Department appointed a special counsel to oversee two Trump-related investigations, including the January 6, 2021-related probe and another into alleged mishandling of classified materials found at Trump's Palm Beach, Florida, home and resort. It's unclear how special counsel Jack Smith's appointment will affect discussions between the Justice Department and Pence's team.

The Justice Department declined to comment to CNN, as did a representative for Pence.

Pence recently published a memoir that described some of his interactions with Trump as the former president sought to overturn the 2020 election results. The book's publication had raised anticipation that the Justice Department would likely seek information about those interactions as part of the criminal investigation.

Pence has rebuffed an interview request from the House select committee investigating January 6, but he has allowed top aides to provide testimony in the House's probe, as well as in the Justice Department's criminal investigation.

Jacob's testimony on October 6 marked the first identifiable time when the confidentiality Trump had tried to maintain around the West Wing after the 2020 election had been pierced in the criminal probe following a court battle. A week after Jacob spoke to the grand jury again, Short had his own grand jury appearance date, CNN reported.

Among a large group of former top Trump officials, Jacob has been one of the most searing voices condemning the then-president's actions after the election, especially regarding the pressure he and his election attorney, John Eastman, tried to place on Pence to block the congressional certification of the presidential vote.

In his memoir, the former vice president wrote that Trump warned him days before the January 6 attack on the US Capitol that he would inspire the hatred of hundreds of thousands of people because he was "too honest" to attempt to overturn the 2020 election results.

Saying Trump was "reckless" with his tweet attacking his vice president that day, Pence was critical of the former president over the events surrounding the insurrection. He had told Trump directly afterward, he wrote, that he was angry and that what he'd seen that day infuriated him.

Still, Pence said earlier this month that Congress has "no right" to his testimony and that he was "closing the door" on providing it to the House select committee -- prompting swift criticism from the committee's top two members.

"The Select Committee has proceeded respectfully and responsibly in our engagement with Vice President Pence, so it is disappointing that he is misrepresenting the nature of our investigation while giving interviews to promote his new book," said Reps. Bennie Thompson and Liz Cheney, who serve as the panel's chair and vice chair, in a joint statement at the time.