Due to court order, 'Remain in Mexico' rules for migrants are likely to restart Monday 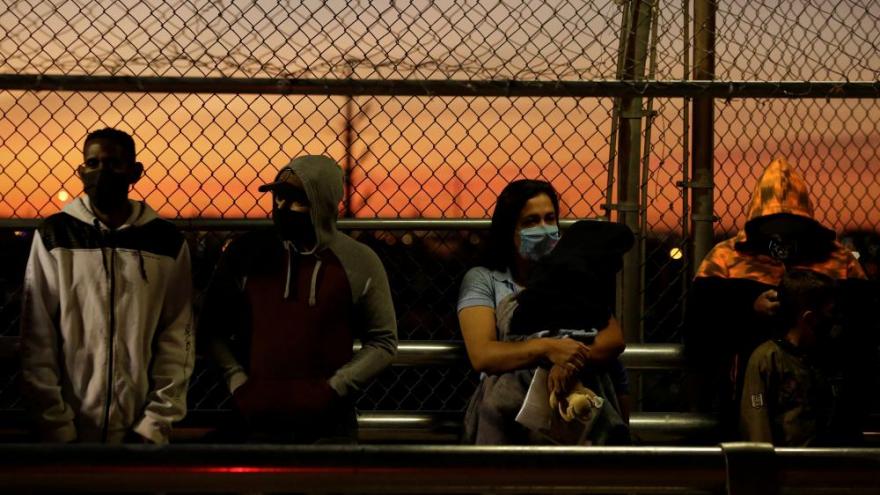 Migrants in the "Remain in Mexico" program queue at the Paso del Norte border bridge to reschedule their immigration hearings amid the coronavirus outbreak, in Ciudad Juarez, Mexico April 21, 2020.

(CNN) -- The Biden administration plans to relaunch the Trump-era border program known as "Remain in Mexico" on Monday due to a court order, meaning the US will again send migrants to Mexico to await their immigration court hearings, administration officials announced Thursday.

Mexico on Thursday agreed to the terms of the revamped program and said it would begin accepting migrants.

The program, which forces non-Mexican migrants to stay in Mexico until their immigration court dates in the US, was suspended at the beginning of President Joe Biden's term and formally terminated months later.

But in August, a federal judge in Texas said the Biden administration had violated federal law in how it had gone about unwinding the program and required that it be restored.

Administration officials on Thursday stressed that they were only reimplementing the program, formally called "Migrant Protection Protocols," because of the court order.

Immigration advocates swiftly condemned the announcement and some Democratic lawmakers criticized the move.

Sen. Bob Menendez said in a statement that he was "deeply concerned" that the Biden administration is "overseeing an expansion of this inhumane policy and implementing the court's order before critical safeguards are in place."

"By adding new nationalities to this policy, applying Remain-in-Mexico border-wide, and limiting access to counsel to a mere 24-hours before individuals and entire families are returned to Mexico, the Administration is going far beyond a good-faith implementation of the court's order," the New Jersey Democrat said.

The administration plans to initially start the program at one port of entry but will rapidly expand to "all the key ports across the southwest border," one official said, adding that people will return to the US for court hearings at four ports on the border -- San Diego, El Paso, Laredo and Brownsville.

The program will potentially be open to all nationalities from the Western Hemisphere, another official said, a change from the Trump-era program.

With the relaunch of "Remain in Mexico," two controversial Trump-era border policies will be in place under Biden. The Trump-era public health order known as "Title 42" that allows for the swift expulsion of migrants encountered at the US-Mexico border remains in effect.

Mexico "demanded a number of humanitarian improvements" as a condition of agreeing to accept people into Mexico under this program, one of the officials said.

The program was launched under the Trump administration in January 2019 as an attempt to slow illegal migration at the US-Mexico border.

Officials said the Biden administration has made several changes to the program, such as asking all potential enrollees whether they have a fear of returning to Mexico.

Under the Trump administration, migrants had to proactively express a fear to border officials to be considered for exception from the program.

The categories of vulnerable individuals that can be exempted from enrollment in the program will be expanded to include those with physical and mental health challenges, the elderly and those at risk of discrimination, particularly because of their gender orientation or sexual identity, the official said.

The US also agreed to complete court hearings within 180 days "to the greatest extent possible" the official added.

All individuals enrolled in the program will be provided Covid-19 vaccines before they are returned to Mexico -- an important step for Mexico, the official said.

Access to counsel was also a discussion point between US and Mexican officials.

Everyone in the new program will have access to an attorney before and during their interviews about fear of returning to Mexico, as well as prior to court hearings in the US, the official added.

Another official said that transportation from Mexico back to the border will also be improved.

Transport will be arranged to in from court hearings and Mexico will provide security accompaniment to buses to and from hearings.

Additionally, people in the program will be moved away from the Laredo and Brownsville courts to interior cities for their shelter while they await transport to a court hearing, the official said.

This story has been updated to include Mexico's response and reaction to the announcement.