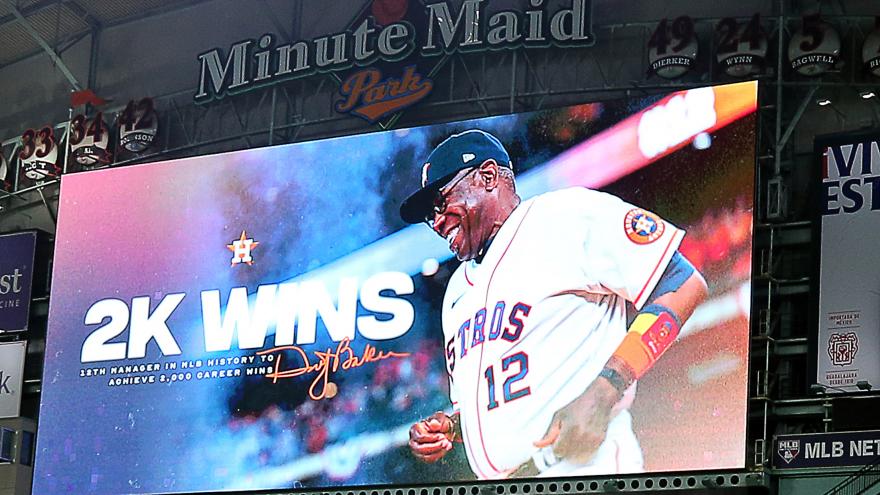 Baker is the 12th manager to reach 2,000 career wins. Of the previous 11 to accomplish the feat, 10 are in the National Baseball Hall of Fame. The other, Bruce Bochy, is not yet eligible.

"It feels great whenever you reach a goal," said Baker, sitting in his postgame press conference next to a bottle of champagne, "I didn't really have this goal until, I don't know, four or five years ago, when I realized I had a chance."

Baker's first win was on April 6, 1993, when the Giants won in St. Louis against the Cardinals. All five teams that he has managed advanced to the postseason.

"I think about Hank Aaron and Jackie Robinson and Frank Robinson, who helped me a lot, Bill Walsh, all the general managers and owners I've had, whether they fired me eventually or not," Baker said.

"It just sort of added to my perseverance and determination and faith. I've also got to thank my detractors for giving me the motivation to go on because there's a lot of people that doubted me in the beginning when I first got the job with no experience, a lot of them that doubted me even though I was winning."

Before he was a manager, Baker was a successful player. He was an All-Star, Gold Glove winner, Silver Slugger winner, NLCS MVP and a World Series champion.

He is one of only two individuals in MLB history to produce 1,800 hits as a player and 1,800 wins as a manager. Joe Torre is the other.

On the same evening, Baker's son, Darren, hit a walk-off sacrifice fly -- when a batter hits a ball high into the air to the outfield or foul territory which allows a runner to score -- for the Wilmington Blue Rocks to bring home the winning run in a 3-2 victory over the Bowling Green Hot Rods.