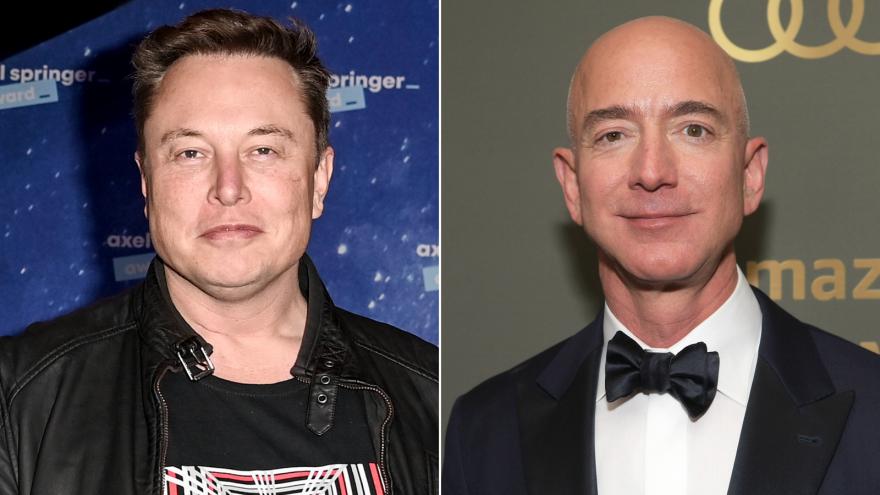 (CNN) -- Elon Musk edged past Amazon founder Jeff Bezos to grab the title of world's richest person, according to Bloomberg.

A 6% rise in Tesla shares early Thursday lifted the value of its CEO's stock holdings and options by $10 billion, taking his net worth to about $191 billion. A more modest rise of less than 2% lifted Bezos' Amazon shares by about $3 billion, putting his net worth at $187 billion.

Bloomberg's real-time billionaire tracker still has Bezos about $3 billion ahead of Musk. But the tracker doesn't update until the end of the trading day. Bloomberg posted an article confirming Musk's title.

Bill Gates is now a distant third at $132 billion, according to Bloomberg.

The Forbes real-time tracker still has Musk and Bezos $18 billion apart as of the close of trading Wednesday, after Bezos lost $4.3 billion in the value of his Amazon stock. Although the broader market was up sharply Wednesday, Big Tech stocks, including Amazon, fell on concerns that Democratic control of the Senate could mean greater scrutiny and regulation on the industry.

Another gain in Tesla shares Wednesday lifted Musk's net worth by $4.1 billion to $165.4 billion, according to Forbes' calculations. But Forbes does not appear to be giving Musk credit for the value of options he received in 2020 to buy an additional 33.6 million shares of Tesla.

Musk is also the primary shareholder and CEO of SpaceX, though SpaceX is privately held, so its value does not fluctuate as much as the value of Tesla.

Bezos' stake in Amazon shares increased by $75 billion in 2020, to $173.3 billion, given the huge increase in sales driven by the Covid-19 pandemic.

But that was nothing compared to Musk's holdings in Tesla. The 170 million shares of Tesla he already owns increased in value by $106 billion during 2020, as shares shot up 743% during the course of the year.

The value of his stock options he held at the start of the year increased by $14.2 billion, while the new options he received during the course of the year as part of his pay package had a value of $21.5 billion at year's end.

Musk caught Gates for the title of the world's second-richest person in late November, but Tesla shares have increased in value by 45% since then, lifting Musk's net worth by $53 billion over the past couple months.

Tesla shares are off to a good start in 2021, rising more than $90 a share, or 13%, since the start of this year, including the gains early Thursday. That has lifted Musk's Tesla holdings and options by about $21 billion this year. Meanwhile, Amazon's stock was down slightly for the year as of late morning Thursday.

Musk is set to qualify for options to buy another 16.9 million shares of Tesla early this year, according to company filings. Those options would be worth $12.3 billion at the shares' current value, after taking into account the exercise price.

Bezos does not have any Amazon stock options, only the 53.2 million shares he has as the company's founder. He would have had more if he hadn't given 19.7 million shares to his ex-wife, MacKenzie Scott, in his divorce. Bezos has also sold off or has given away shares as part of his charitable donations. Musk has never disposed of any Tesla shares.

Bezos isn't the only one that Musk caught up to Thursday. ExxonMobil, the United States' most valuable oil company, had a market value at midday Thursday of just under $191 billion. So Musk, who is a leading advocate of switching drivers around the world from gas and diesel to electric vehicles, is for the time being at least worth more than America's largest oil company.