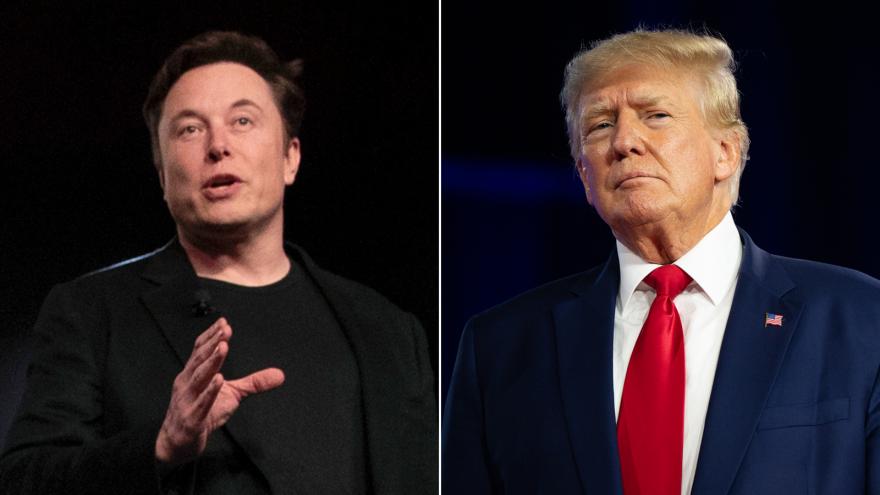 The account, which Twitter banned following the January 6, 2021, attack on the Capitol, was restored after Twitter CEO and new owner Elon Musk posted a poll on Twitter on Friday night asking the platform's users if Trump should be reinstated.

"The people have spoken. Trump will be reinstated," Musk tweeted Saturday night. "Vox Populi, Vox Dei," Latin for "the voice of the people is the voice of God."

The much-anticipated decision from the new owner sets the stage for the former president's return to the social media platform, where he was previously its most influential, if controversial, user. With almost 90 million followers, his tweets often moved the markets, set the news cycle and drove the agenda in Washington.

Trump has previously said he would remain on his platform, Truth Social, instead of rejoining Twitter, but a change in his approach could hold major political implications. The former president announced this month that he will seek the Republican presidential nomination in 2024, aiming to become only the second commander in chief ever elected to two nonconsecutive terms.

Asked on Saturday what he thought of Musk purchasing Twitter and his own future on the platform, Trump praised Musk but questioned whether the site would survive its current crises.

"They have a lot of problems," Trump said in Las Vegas at the Republican Jewish Coalition meeting. "You see what's going on. It may make it, it may not make it."

Still, Trump said he liked Musk and "liked that he bought (Twitter.)"

"He's a character and I tend to like characters," the former president said of Musk. "But he's smart."

Throughout Trump's White House tenure, Twitter was central to his presidency, a fact that also benefited the company in the form of countless hours of user engagement. Twitter often took a light-touch approach to moderating his account, arguing at times that as a public official, the then-president must be given wide latitude to speak.

But as Trump neared the end of his term -- and increasingly tweeted misinformation alleging election fraud -- the balance shifted. The company began applying warning labels to his tweets in an attempt to correct his misleading claims ahead of the 2020 presidential election. And following the US Capitol riot on January 6, 2021, the platform banned him indefinitely.

"After close review of recent Tweets from the @realDonaldTrump account and the context around them we have permanently suspended the account due to the risk of further incitement of violence," Twitter said at the time. "In the context of horrific events this week, we made it clear on Wednesday that additional violations of the Twitter Rules would potentially result in this very course of action."

The decision followed two tweets by Trump that, according to Twitter, violated the company's policy against glorification of violence. The tweets, Twitter said at the time, "must be read in the context of broader events in the country and the ways in which the President's statements can be mobilized by different audiences, including to incite violence, as well as in the context of the pattern of behavior from this account in recent weeks."

The first tweet -- a statement about Trump's supporters, who he called "75,000,000 great American Patriots who voted for me" -- suggested that "he plans to continue to support, empower, and shield those who believe he won the election," Twitter had said.

The second, which indicated he did not plan to attend Joe Biden's inauguration, could be viewed as a further statement that the election was not legitimate and could be interpreted as Trump saying that the inauguration would be a "safe" target for violence because he would not be attending, according to Twitter.

Following Musk's decision, Republican Rep. Liz Cheney of Wyoming suggested on Twitter that "it's a good time to watch" a public hearing held earlier this year by the House select committee investigating the Capitol attack.

"It covers each of Trump's tweets that day, including those that have been deleted, and features multiple Trump (White House) staff describing his inexcusable conduct during the violence," Cheney, a notable Trump critic who serves on the select committee, tweeted Saturday.

On November 18, Musk tweeted that he had reinstated several controversial accounts on the platform, but that a "Trump decision has not yet been made."

"New Twitter policy is freedom of speech, but not freedom of reach," he said at the time. "Negative/hate tweets will be max deboosted & demonetized, so no ads or other revenue to Twitter. You won't find the tweet unless you specifically seek it out, which is no different from rest of Internet."

Musk had previously said he disagreed with Twitter's permanent ban policy and could also return other accounts that had been removed from the platform for repeated rules violations.

"I do think it was not correct to ban Donald  Trump; I think that was a mistake," Musk said at a conference in May, pledging to reverse the ban were he to become the company's owner.

Jack Dorsey, who was the CEO of Twitter when the company banned Trump but has since left, responded to Musk's comments saying he agreed that there should not be permanent bans. Banning the former president, he said, was a "business decision" and it "shouldn't have been."

The Trump decision is the latest in a series of major changes Musk has made at Twitter, including pushing out its top leadership and a significant portion of its staff.

Musk also launched an updated subscription service allowing users to pay to receive verification checkmarks, an indicator previously reserved for authenticated public figures, which was quickly abused and used to impersonate prominent people, businesses and government agencies. Twitter paused the service and plans to reinstate it later this month.

The chaos has scared off many of Twitter's major advertisers, who are wary of having their ads run alongside potentially objectionable content, threatening the company's core business model. Macy's, Volkswagen Group, General Mills and other large brands have all paused advertising, causing what Musk called earlier this month "a massive drop in revenue." And restoring Trump to the platform is unlikely to help.

"In Elon Musk's Twittersphere, you can incite an insurrection at the U.S. Capitol, which led to the deaths of multiple people, and still be allowed to spew hate speech and violent conspiracies on his platform," Johnson said in a statement. "If Elon Musk continues to run Twitter like this, using garbage polls that do not represent the American people and the needs of our democracy, God help us all."

In an apparent effort to reassure advertisers and users, Musk previously said he would implement a "content moderation council" to help set policies, and that no major content moderation decisions would be made before it was in place. There is no indication that such a group was involved in the move to restore Trump nor the other users who were returned to the platform on Friday.

In an op-ed published in the New York Times Friday, Twitter's former head of trust and safety Yoel Roth, who left the company last week, said that despite the billionaire's promises to involve others in key decisions, "Mr. Musk has made clear that at the end of the day, he'll be the one calling the shots."

Any surge in traffic on Twitter due to Trump's reinstatement could also put a technical strain on the platform that would coincide with the World Cup, which is typically one of the biggest audience events on the site.

"Twitter servers being out [put] through quite the stress test by @elonmusk right now," Sriram Krishnan, an investor who is assisting as part of Musk's Twitter leadership team, tweeted Saturday night.

Mass worker exits at the company had prompted users, as well as some employees, to question whether the platform could face outages or other issues. Already, Twitter has experienced some glitches in recent days, including with its feature that allows users to download their data from the site.