ER on the field: An inside look at how NFL medical teams prepare for a game day emergency 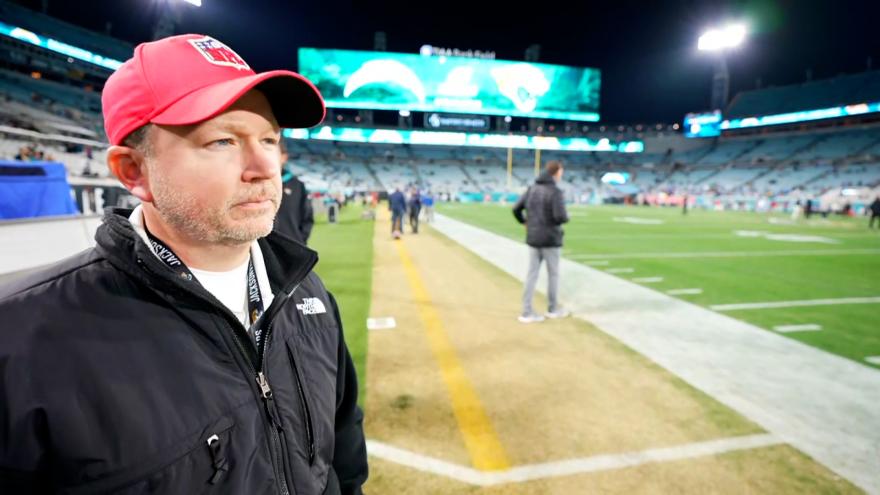 (CNN) -- When Buffalo Bills safety Damar Hamlin dropped to the ground from a cardiac arrest earlier this month, help was by his side in under 10 seconds to administer CPR.

It wasn't coincidence or luck. Rather, it's the result of careful planning and practice -- the execution of detailed choreography performed by the medical personnel present at every National Football League game.

"What we want is that the players are getting the same care here that they would if they were in a hospital or health care facility and that's what the system has been set up to do," NFL Chief Medical Officer Dr. Allen Sills told CNN Chief Medical Correspondent Dr. Sanjay Gupta on Saturday.

About 30 medical personnel are at every game, including orthopedic and trauma specialists, athletic trainers, paramedics and dentists. Sills gave CNN a rare behind-the-scenes look at the league's medical personnel during Saturday's playoff game between the Jacksonville Jaguars and the Los Angeles Chargers. The goal, Sills said, is to deliver hospital-quality care on the gridiron.

When Hamlin collapsed on January 2, speed was of the essence. Studies find that for every minute someone who experiences cardiac arrest and doesn't receive CPR, their chances of survival decrease 7 to 10%.

Hamlin's heart was restarted on the field. The 24-year-old spent more than a week in the hospital in Cincinnati, then transferred to a hospital in Buffalo before he was released home last week.

"I think he was being resuscitated as he would have been in an emergency room at that moment," Sills said.

The NFL requires all teams to have an emergency action plan, or EAP, for all player facilities, including practice fields.

The plans are filed by the teams every year and are approved by the League as well as the NFL Players Association, the players' union, Sills said. They run drills on the plan, so when an event like Hamlin's cardiac arrest occurs, the medical team's choreography is close to automatic.

These plans include details about where ambulances are located, the quickest route to the hospital, where medical equipment is stored, and even what radio and hand signals will be used in case of a medical event.

While the teams are all connected by radio, the sound from the game and the crowd can be overwhelming.

"It gets loud and so having those nonverbal signs is a way for us to communicate," explained Dr. Kevin Kaplan, Jacksonville Jaguars' head physician. For example, using two hands as if driving a steering wheel indicates needing the medical cart, while crossing arms to make an "X" is an all-call for medical personnel.

The home team sends the plan to the visiting team a week before the game. Then, an hour before kickoff, medical teams from both teams gather to review and confirm the details in what's known as a "60-minute meeting."

It's like the NFL's version of what happens in a hospital: Before doctors perform a procedure, the medical team gathers for a "timeout" to review who is responsible for what.

Before the football game, they identify the team physicians, athletic trainers and key trauma personnel, including an airway specialist who can place a breathing tube in moments, if needed.

Watch for the red hat

In the excitement of game day, there needs to be a simple, clear way to identify who can help in case of an emergency.At any NFL game,you'll see it: a red hat.

"That signifies me as the emergency physician, the airway physician, so that even the other team knows when I come out what my role is," Dr. Justin Deaton told Gupta. "Once I come out onto the field, I kind of take over, I identify if the patient is either unconscious or has an airway obstruction."

At every game, Deaton stands along the 30 yard line, just like his counterparts at other games.

"We standardize the location so that everybody knows where our airway physician is going to be located," said Sills.

If the player isn't breathing, it's up to Deaton to identify who will administer CPR. If the player's breathing is blocked and he can't breathe on his own, Deaton may have to intubate the player on the field. In order to do so, he carries a videoscope to look down someone's throat and an ultrasound machine.

In the event Deaton can't get the patient to breathe through their mouth, he's prepared to essentially do surgery on the field.

"If someone has an obstruction or significant trauma to the face and we can't secure an airway by the mouth, we're able to make an incision and insert that way," he told Gupta. "I really have all the resources available here that I would have in an emergency room."

The challenge is that they're surrounded by chaos -- not the more controlled environment of theemergency department or operation room.

"When you have a larger-than-average-sized person that's laying flat on the ground and not able to be elevated to a certain level with extra equipment, plus cameras and other people around, those are really the confounders and things that make it more difficult to manage," Deaton said.

In football, it's not just about executing in the moment -- it's about anticipating. The same is true for medical personnel.

The NFL includescertified athletic trainers on its medical team to serve as spotters. They're positioned throughout the stadium, including a booth that oversees the entire stadium, to watch the game in real time and again in replay -- sometimes over and over -- to immediately catch any injuries or assess those that might have been overlooked. They have around 30 different angles of the field at their fingertips.

"We watch every play probably minimally four times and then we'll go back and watch it again," said Sue Stanley-Green, one of the athletic trainer spotters assigned to Saturday's game. "We just want to make sure we don't miss anything."

The spotters who sit in a stadium booth above the field are able to communicate directly with the medical team on the sidelines and direct them to concerning plays and possible injuries. They also have a unique line of communication to the referees, and the ability to stop the game for a medical timeout.

Sills acknowledges that there is always room for improvement and need to evolve.

In September, Miami Dolphins quarterback Tua Tagovailoa experienced an apparent head injury while playing against the Bills. He stumbled after being hit, but was allowed to return to the game.The incident put new scrutiny of the NFL and its policies.

Afterward, the league changed its concussion policy. Now, Sills says, "if we see something that looks like ataxia on video, (players) are done."

Sills said he believes the NFL's network of practices is working to keep players safe, and the league is currently reviewing the moments around Hamlin's cardiac arrest. One aspect of emergencies that Sills wants to see more work on is privacy.

In the moments after Hamlin fell, his teammates formed "kind of a shield," Sills said, which limited the view of Hamlin.

"I think there's some things there that we may look at," Sill said. "Obviously any of us would want some privacy in a moment like that."

But when facing a test like saving a life on the field, "everything went really as well as you could have asked to have gone in the moment," Sills said. "It's always about the right people, the right plan and the right equipment."