Exclusive: Natural Light is tapping into nostalgia with its new can design 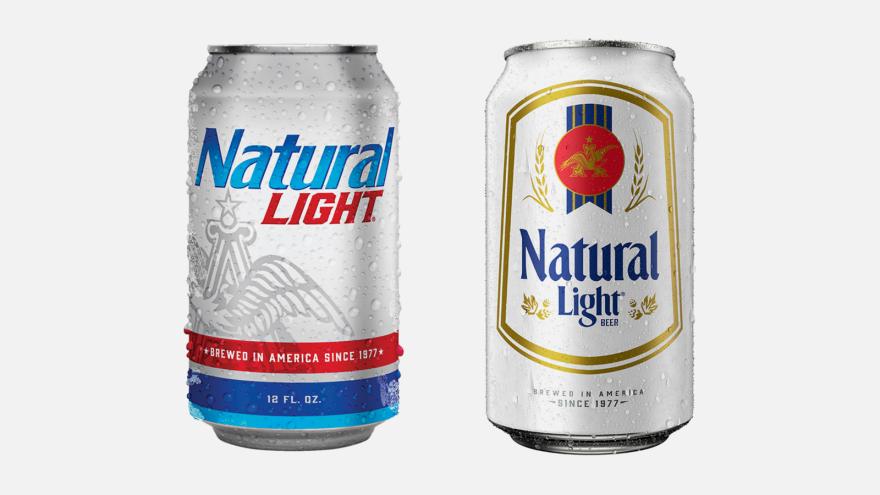 (CNN) -- Natural Light's new cans will soon look a lot like their old ones.

Drinkers will soon notice a retro-inspired makeover that mirrors the budget beer brand's 1979 design, featuring a throwback logo, crest and colors. It's part of a broader campaign to mature the beer's identity, which is synonymous with college-aged drinkers.

"There's been a lot of conversation about how 'what is old is now what is cool,' so we wanted to look back into our archives, so the can itself is harkening back to the design of the late 1970s," said Krystyn Stowe, head of marketing for Natural Light.

When the retro design was tested a few years ago in North Carolina and South Carolina, the response was "completely off the charts," Stowe exclusively told CNN. The beer had the "best rate of sale that we've seen in years," compared to its current silver, red and blue branding, which has been in use for more than a decade.

Following an "incredibly successful" run, it was a "natural next step to take this look nationally," she said. Drinkers will see the permanent redesign on its cans, bottles and cardboard packaging beginning in early February.

Turning to nostalgia is an ongoing trend across food, beverages and even technology.

Created in 1977, Natural Light is experiencing a slight midlife crisis of its own. Sales of budget beer are off their 2020 highs, when consumers stocked up at the beginning of the pandemic. Now, consumers are increasingly buying premium brands or Mexican lagers.

"Though inflation is likely to impact consumers' behavior in alcohol categories, drinkers are more likely to decrease their alcohol consumption entirely than they are to trade down to a lower tier brand or a less expensive category," Olson said.

US budget beer sales fell by approximately 8% in 2022, following a drop of 5% in 2021, according to IWSR Drinks Market Analysis. Natural Light sales have held "steady," Stowe said, but noted "we definitely have room to grow."

For Natural Light to do that, the Anheuser-Busch-owned brand is "widening its aperture," Stowe said. "Traditionally, people think of us as college beer — and we're graduating."

"What we realized is that it's not just legal drinking-aged people that are drinking our beer, but all the way up to 30- to 40-year-olds," Stowe said. "We're not pivoting away from college, but now we're welcoming in a whole new cohort that has always existed, but that we hadn't paid the attention or time they deserve to."

According to Olson, Natural Light's pivot to older drinkers is the result of alcohol brands targeting younger drinkers that are craving flavorful creations found in ready-to-drink cocktails or lower calorie beers, like Michelob Ultra.

"Natural Light's decision could be in efforts to go the opposite way, and reach the less competitive audience of older adults," she said.